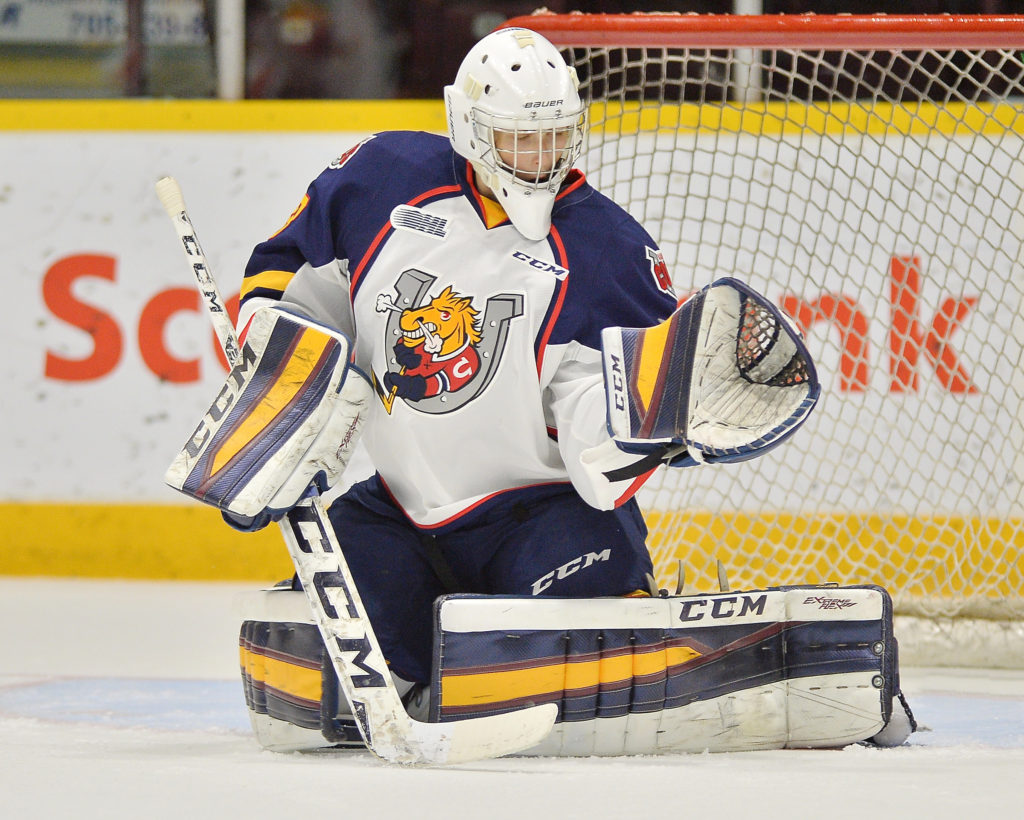 Christian Propp made 47 saves, but the Saginaw Spirit would edge the Barrie Colts 4-2 Saturday evening.

C.J. Garcia’s wrist shot midway through the third period would prove to be the winner.

The Spirit (3-10-2-1) were only playing their fifth home game of the season, while all their three wins have come against Eastern Conference opponents.

After the Colts failed to capitalize on a Spirit penalty in the opening minute, the home team got their chance with the man advantage when Kyle Heitzner took a slashing penalty.

Smooth passing around the Colts four-man box saw the puck land on Mitchell Stephens’ stick. His wrist shot was turned aside by Propp’s pad, but the rebound came out to Brady Gilmour and he sent a pass immediately over to Stephens again, who buried his fifth of the season into a gaping cage.

Dale Hawerchuk’s club had their best chance to tie the game shorthanded when captain Cordell James skated down the ice on a partial two-on-one but had his wrist shot turned aside by Evan Cormier. He too had a rebound bounce out to the slot, but Anthony Stefano couldn’t convert on a chance from the hash marks.

Outshot 17-7 after the first, Propp’s best saves came in the final seconds when the Spirit were doing everything they could to double their lead. Defenceman Keaton Middleton had his point-blank shot from the slot shut down by the Milton, Ont. native.

With two more penalties in the middle frame, Propp continued to keep his team in the game with timely saves.

His teammates were trying to reward his stability with using their penalty-killing pressure to create scoring chances.

Evidently, they created another shorthanded odd-man rush. This time, Lucas Chiodo skated down the ice on a two-on-one with Stefano, but once again Cormier was there to keep the Colts off the board.

Roughly five minutes into the third, the Colts would finally find an answer to Cormier.

Stefano led the rush down the right wing and dropped a pass back for Aidan Brown, whose slap shot found the back of the net to tie the game 1-1.

The tie game was short-lived, however. Almost two minutes later, the Spirit would regain the lead when Tye Felhaber would drive to the net down the right side. With Matthew Kreis providing the net-front presence, he would convert a pass from Felhaber to restore the one-goal advantage and make it 2-1.

Chiodo would do his part to keep the Colts in the game. At 12:31, Zach Magwood would create a turnover behind the net and he centered the puck to Chiodo for his seventh goal of the season to make it 3-2.

An empty-netter would make it 4-2.

The Colts are back at it again Sunday afternoon with a tilt against the Memorial Cup hosts, Windsor Spitfires.