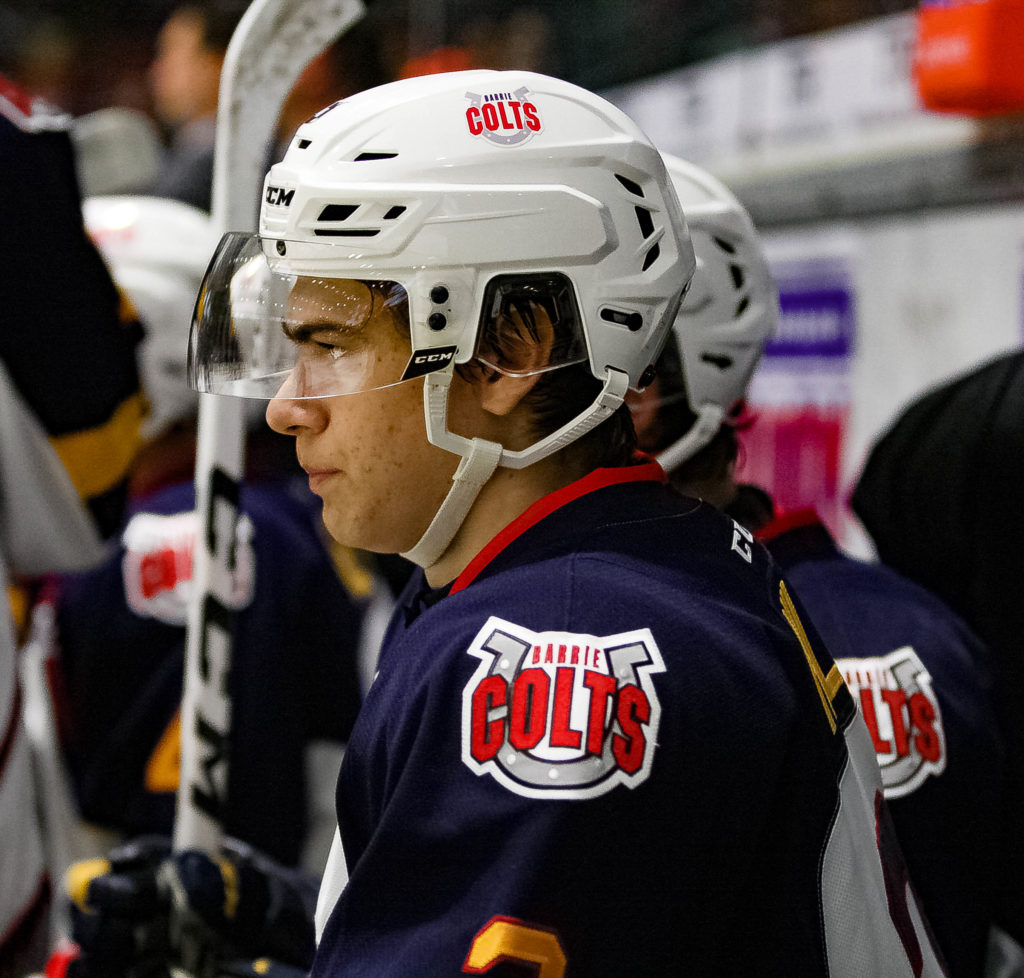 North Bay defends home ice in a 6-2 victory over Barrie to extend their lead on the 8th spot in the Eastern Conference to five points.

Tuesday had every cliche involved for the Barrie Colts as this was as close to a must win as possible, because a loss would just about eliminate them from a playoff spot.

Well things didn’t go as planned in the early goings for Barrie who were wearing their 3rd jerseys on the road. Just 1:22 into the contest it was Mason Primeau tucking one in past Kai Edmonds who got the nod from coach Dale Hawerchuk on this night.

It got worse before it got better as Justin Brazeau, who has had Barrie’s number all season long continued things.  With 9 goals coming into the game in the five meetings this season he would add two more to extend the North Bay lead.  His two goals came just a minute and twenty-three seconds apart to give the Troops a good grip on this game most of the way through the first period.

Barrie wouldn’t show any quit though.  With a little over two minutes to go in the period, Barrie’s defensemen Tyler Tucker snapped an innocent shot through a screen that found it’s way past Christian Propp to put Barrie on the board making it 3-1.  Tucker’s 13th of the season was assisted by Dalton Duhart and Riley Piercey.

In the second, North Bay came back with more.  First it was Brad Chenier making it 4-1 six minutes into the second period.  The Battalion would follow that with Primeau’s 2nd of the game and then before the horn could sound to end the frame it was Brazeau adding another one to complete the hat-trick and give them a commanding 6-1 lead heading into the final period.

The third period would serve as just more time to play before the final horn as Barrie put themselves too far behind to make a comeback.

One bright spot would be Tyson Foerster who continued his hot pace by scoring his 9th of the season on the power play with assists going to Ben Hawerchuk and Jason Willms.

That’s as close as Barrie would get, falling 6-2 to North Bay.

The loss puts Barrie five points behind North Bay in the standings for the final playoff spot, with just three games left.  At this point, the Colts will need to win out and have the Battalion lose out in order to make the playoffs.  Barrie will finish the season up with games against Owen Sound (Wednesday), Niagara (Saturday at home) and Mississauga (Sunday).