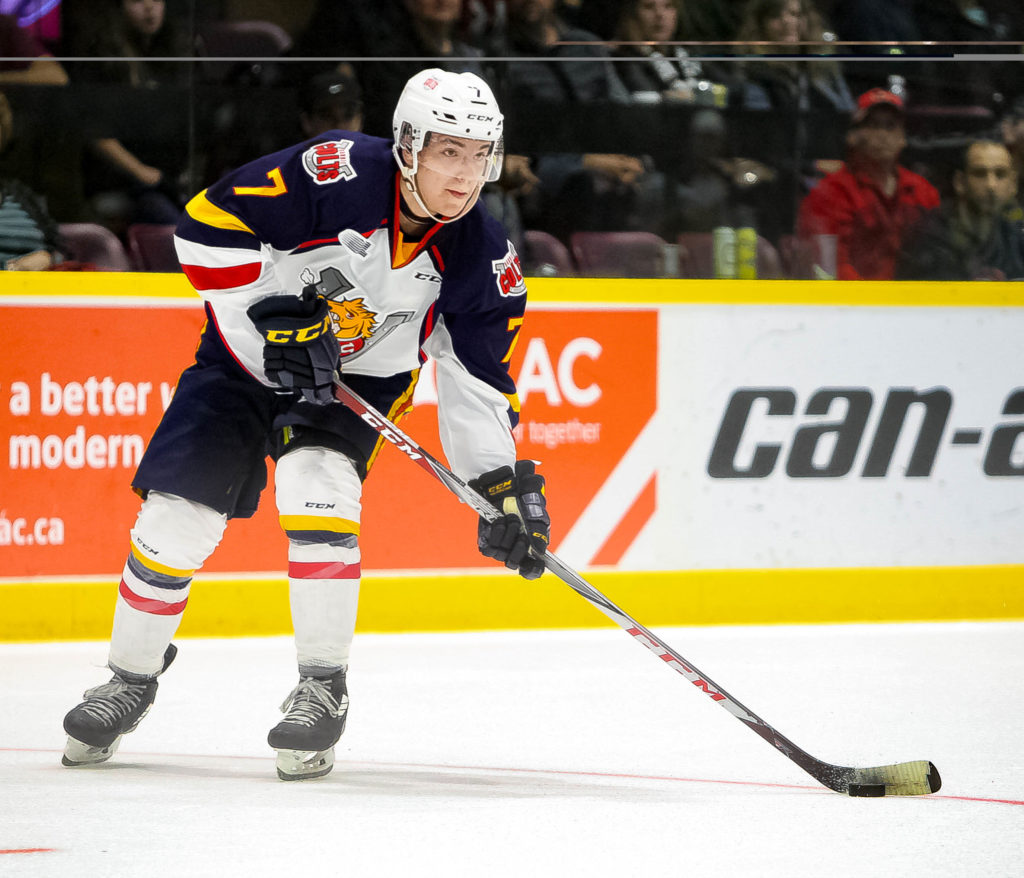 The Peterborough Petes’ Chris Pacquette would score the overtime winner to propel the Petes to a 5-4 victory over the Barrie Colts Saturday night.

The two top teams in the Eastern Conference were squaring off on Saturday night in Peterborough. Both teams leading their respective divisions holding down the one and two spots in the East.

It didn’t take long for the scoring to get started at the Peterborough Memorial Centre. On an early Barrie Colts powerplay the boys in blue would work the puck around late into the extra man. Jaden Peca would slide the puck to his captain Justin Murray at the point who one timed it between the legs of a screened Dylan Wells to open the scoring. Murray’s fellow defenseman Joey Keane would record the other assist.

Shortly after the Petes would get a powerplay of their own and would get a scoring chance very early into the man advantage but Leo Lazarev would make the big stop. Lazarev was back in between the pipes after taking the night off against his former team on Friday night, in search of his ninth win of the season.

Peterborough would take a penalty to bring it to four on four hockey which opened up a lot more skating room. One of the most dangerous guys on the Petes would make Barrie pay. Nikita Korostolev would step out of the corner and absolutely fire a shot over the shoulder of Lazarev to tie the game.

Sometime the best idea is to just put the puck on net. On another Barrie powerplay Joey Keane came down the wing looking for an open man in front and made the pass cross ice and it banked off a Petes defender and past Wells to restore Barrie’s one goal lead. Murray tallied his second point of the night with an assist on the go ahead goal.

Just past the midway point of the second period the Petes would tie the game. Chris Pacquette would be the beneficiary tying the game at two.

Later in the period Lazarev stopped Peterborough from taking their first lead of the game as he robbed Semyon Der Argunchinstev with the left pad.

Down the other end it was Lucas Chiodo ringing one off the bar as the game ended tied after forty minutes of play.

Barrie would begin the third period with three consecutive powerplays, but it was the Petes who would strike. Jonathan Ang would get sprung on a break and get behind the Barrie defense and Kade Landry was forced to haul him down which warranted a penalty shot.

On the attempt Ang showed off his moves sliding it past Lazarev to give Peterborough their first lead of the game at 3-2.

Time was ticking away inside the Peterborough Memorial Centre and looked like the Petes were going to go home with the two points. Then Barrie forced a turnover at the opponents blueline and Peca put on a show. Grabbed the puck just inside the blueline before pulling off a dandy move past a defender before sniping home the tying goal.

With less than three minutes to go Barrie would take a delay of game penalty giving the Petes a powerplay. Ang would score his second of the night with a shot from the point that beat a screened Leo Lazarev glove hand.

The boys in blue would not go away. Kade Landry fired a shot through a screen with a little over a minute remaining to tie the game. The goal was Landry’s third of the season sending this game to overtime at 4’s.

These two teams will not meet again until March 10th back in Barrie. The Colts will have nearly a week off before their next game as they head to Sudbury on November 10th before being back at home on Remembrance Day in front of the home crowd.