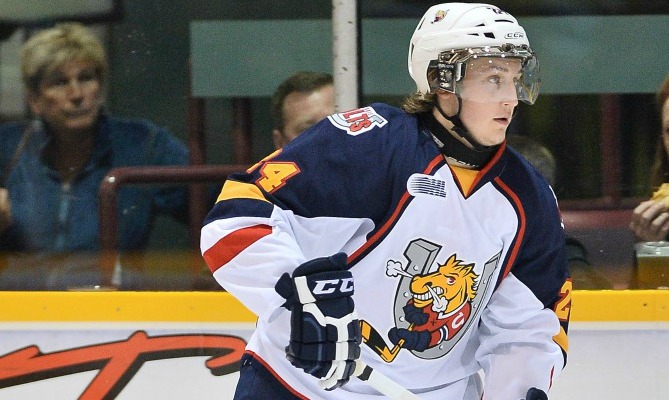 The Barrie Colts were back on the ice Saturday night after suffering a 3-2 shootout loss to the Steelheads on Friday, but did not fair much better. Wolves forward Nathan Pancel had a hat trick and Sudbury skated to the 6-3 victory at the Barrie Molson Centre.

Sudbury opened the scoring at 7:44 of the first period as rookie forward Stefan LeBlanc scored on the power play for his first career OHL goal. LeBlanc let a slap shot go from the point, which found it’s way through the five hole of netminder Alex Fotinos for the 1-0 lead.

Late in the frame it was Sudbury who would strike again as Nathan Pancel scored his first of the game on a wrist shot from the top of the circle. A scramble in the neutral zone led to the Wolves attack where Pancel would squeak the puck through the legs of Fotinos. Nicholas Baptiste registered the lone assist.

Shots were tied at 10 after the first period with the Wolves on top 2-0.

Goaltender Mackenzie Blackwood would take over the net to begin the second period but it was Sudbury who continued to push the pace. Just 12 seconds in, forward Stefan LeBlanc picked up his second of the game on the first shot of the period. Kevin Raine and Matthew Campagna collected the assists.

The game remained lop sided on the scoreboard and the Wolves eventually scored their fourth straight unanswered goal.

Midway through the second period with the man advantage, Nathan Pancel picked up a rebound at the top of the crease before sliding it home past Blackwood.

Before the end of the second period the Barrie Colts showed some signs of life and finally solved Sudbury goaltender Franky Palazzese.

At 11:18 on the power play, Colts defenceman Michael Webster blasted home a slap shot blocker side on Palazzese for his first career OHL goal. Rookies Matthew Kreis and Andrew Mangiapane picked up the assists.

At 16:06 of the second period Andreas Athanasiou would bring the Colts within two with a power play marker of his own. Athanasiou one timed a pass from captain Aaron Ekblad short side for his third of the season.

Barrie had the edge in shots 25-19 after forty minutes.

The third period saw the Colts’ pour it on but they could not claw their way back into the game.

Wolves forward Nathan Pancel completed the hat trick just over two minutes into the final period as Pancel received a cross crease pass from line mate Nicholas Baptiste before one timing it home at the side of the net. Matthew Campagna also picked up an assist.

A late tally from captain Aaron Ekblad brought the Colts back within two goals once again but it wasn’t enough, as the Wolves would add an empty netter for the 6-3 victory.

Franky Palazzese had a strong performance for Sudbury making 42 saves in the game and 19 of those came in the third period.

Nathan Pancel scored a hat trick and added an assist while teammate Nicholas Baptiste had 1 goal and 3 assists on the night for the Wolves.

The Colts will look to get back in the win column next Thursday October 10th as they host the Oshawa Generals for the first time this season. Click here for tickets.