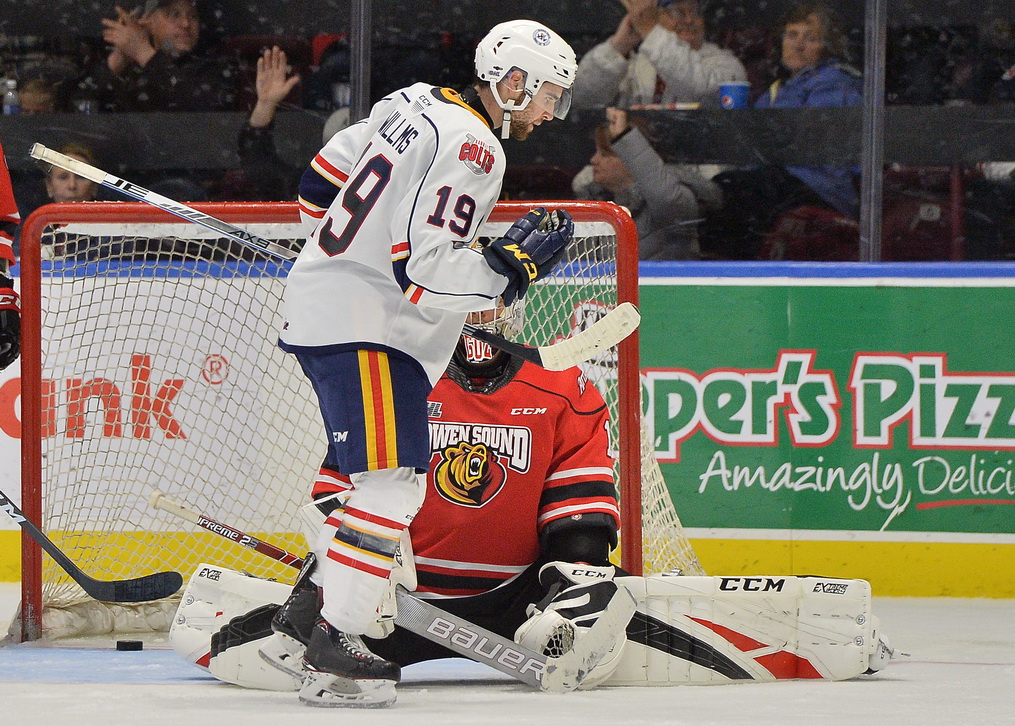 A pair of rookies and the Colts captain would all score a pair of goals leading the Barrie Colts to an 8-5 victory Thursday night at Colts Centre.

Entering the game Thursday night with four newly shuffled lines up front, the Colts coaching staff  gave the rookies an opportunity and did it ever pay off in a high scoring win for the home squad.

Coming off a narrow loss to the Otters one week ago, largely due in part to a flat start, the Colts were to ready to come out of the gates flying to start this one.

Matej Pekar would lead the way registering four points with a goal and three assists. Colts rookies Jacob Frasca and Ryan Del Monte would each score a pair, Del Monte’s first two of his OHL career and Captain Jason Willms scoring a pair of his own, while earning his 150th OHL point.

The Colts kicked off a three game weekend Thursday night. Already the third game of the season series between the two highway 26 rivals, each team having won a game.

Just under two minutes into the matchup the Colts would jump out to the early lead. Pekar winning the race for the puck drove the net from the corner. With the puck coming loose, Frasca followed it up banging in his 2nd of the year to make it 1-0.

30 seconds later Frasca would get sent to the box and put the Attack on their first powerplay of the game. It wouldn’t take long for Owen sound to convert as captain Aidan Dudas’ shot from the point would get through to even the game at 2:48 of the first.

Three minutes later the same Colts line would respond. A steal by Bignell would cause havoc in front for the Attack’s defense and Frasca would bury his 2nd of the game, with Pekar getting his 2nd assist on the goal.

Past the midway point of first, the Attack’s powerplay unit would make the Colts pay once again. Another shot coming off the left wing from Adam McMaster would fool Silovs evening the game at two apiece.

The spirited affair would carry into the second and see the Colts momentum continue as they would double up their lead.

Nathan Allensen would blast his 5th of the season at 3:23 and then with just under three minutes remaining Del Monte would pass off to Victor Hadfield on a two on one, he’d make the shot on net and Del Monte cleaned up the rebound notching his first career OHL goal.

On the powerplay into the third period, Willms would get the monkey off his back finishing off a quick passing play, his 5th of the season. Pekar and Brandt Clarke assisting on thegoal to make it 5-2. His very next shift Willms would dig the puck out himself and bank a shot off an Attack defender for his second of the night and his 150th point in his OHL career to make it 6-2 feeling like the game would be out of reach.

After the Attack replaced goaltender Mack Guzda for Nick Chenard, their offense seemed to spark as Barret Kirwin and Daylon Giroulx would strike quickly with two back to back pulling within two goals, but after the Colts would call a timeout Del Monte would crush any hope of a comeback potting his 2nd of the night to put Barrie back ahead by three.

Owen Sound would pull the goalie while on the powerplay with just over two minutes remaining, and add one more off the stick of Matthew Phillip, but Pekar would close this one out adding one more to make it an 8-5 final on his 14th of the season.

The Colts will look to build off the big win as they’ll welcome the Peterborough Petes Saturday night at Colts Centre before finishing off the weekend on the road in North Bay.