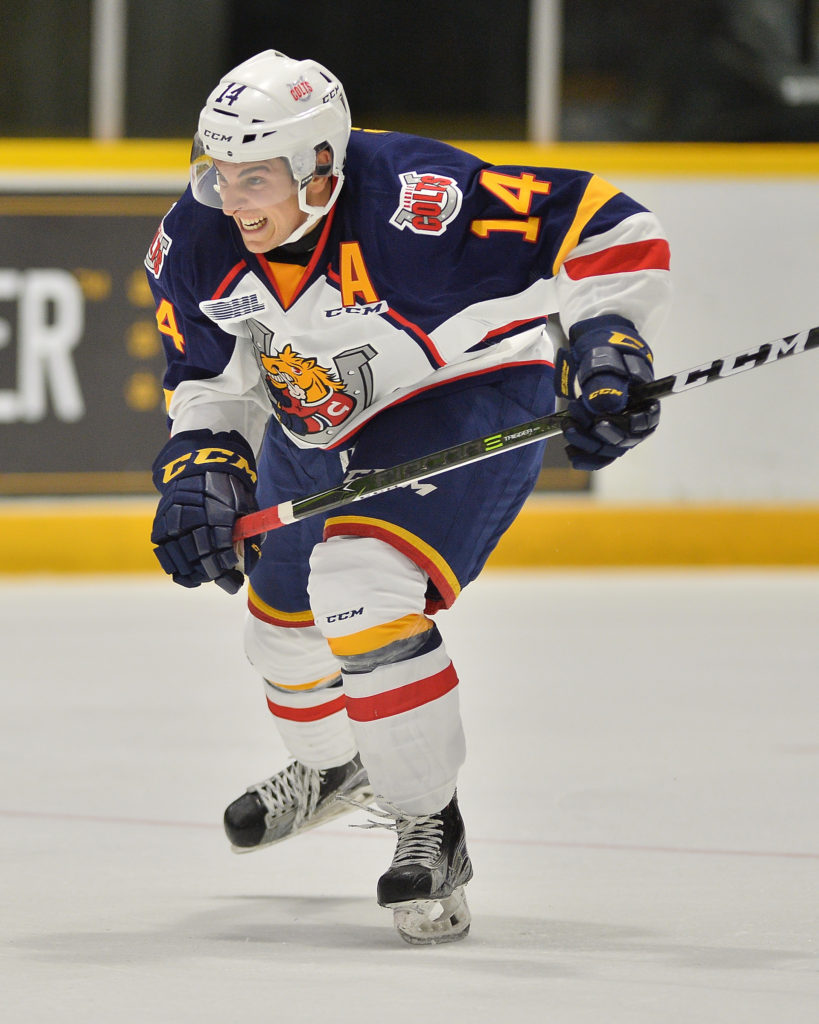 Despite Anthony Stefano’s power-play goal with roughly three minutes to play in regulation to tie the game 4-4, it was Noah Carroll who scored the winner 2:16 into overtime as the Guelph Storm beat the Barrie Colts 5-4 Saturday evening.

Carroll buried the puck into an empty net, after Givani Smith fought off Colts defenders to create space for the night’s hero.

A couple of former Toronto Jr. Canadiens teammates faced off for the first time this season when Kirill Nizhnikov’s Colts welcomed Ryan Merkley’s Storm to the BMC Saturday.

Nizhnikov snagged the early bragging rights six minutes into the game when his backhand lit the lamp for his second goal of the season.

The lead stood for a whole 47 seconds. Off the subsequent faceoff, the Storm countered with a goal of their own when Issac Ratcliffe buried his fourth goal of the season.

Captain Cordell James nearly broke the first-period tie with 10 seconds left in the period. He took the puck off the half wall, but couldn’t manage to get his wrist shot over Anthony Popovich’s glove.

Matt Brassard however, converted on the power play early in the second period after Lucas Chiodo sent a beautiful cross-ice pass to the Barrie, Ont. native for a one-timer and his third goal of year. The assist extended Chiodo’s point streak to three games, where he’s notched two goals and three assists.

Merkley also entered the game on a two-game point streak and extended his to three with an assist on Matt Hotchkiss’s fifth goal of the year. Merkely brought the puck into the zone, but after he was stopped up on a failed deke, a loose puck found its way to Hotchkiss, who placed his wrist shot over David Ovsjannikov’s glove.

Garret McFadden’s second goal of the year broke a 2-2 tie in the second period when he too beat Ovsjannikov with a high wrist shot.

Once the puck dropped for the third period, the Colts cued their comeback.

After being denied point blank in front of the net seconds earlier, James managed to tip a Tom Hedberg point shot at 15:36 to tie the game 3-3.

With all the momentum on the Colts’ side, the Storm came crashing on their parade when Ratcliffe’s second of the game gave the Storm another brief lead before Stefano’s late marker would send the game to overtime.

The Colts head out on a two-game road trip starting in Erie Thursday against the Otters.