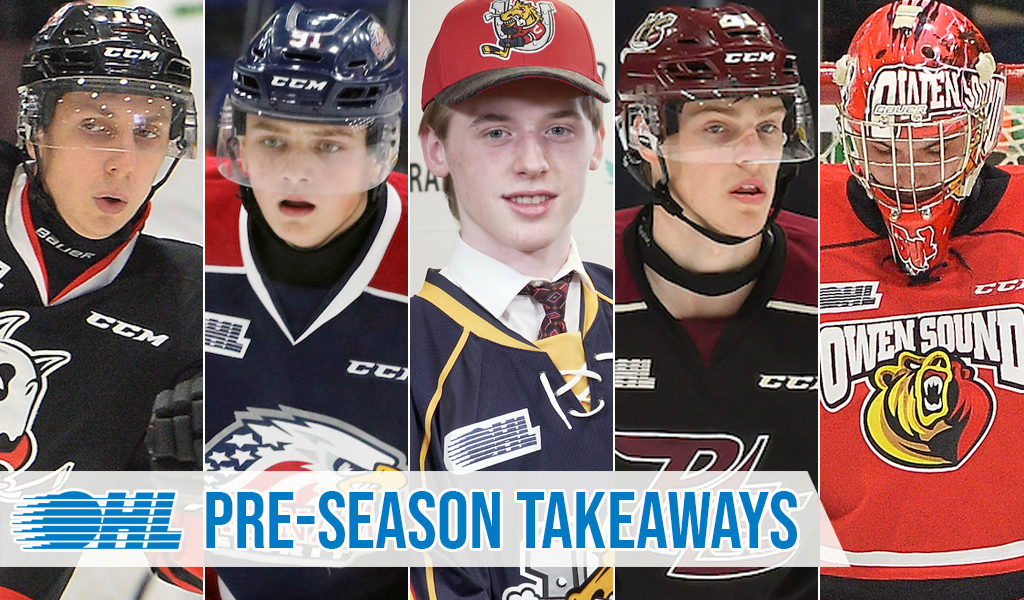 The 2019 OHL Pre-Season is all wrapped up, providing an opportunity to look back at the leaders and some of the players who made an early impression heading into #OHLOpeningWeek.

Attack finish strong with three straight wins
The Owen Sound Attack were among the league’s pre-season leaders, playing to a 3-1 record with three consecutive wins to finish things off. The Bears were led offensively by sophomore forward Kaleb Pearson (3-2–5) and newly added winger Kirill Nizhnikov (2-2–4) who makes his return from playing the second half of last season in his native Russia. Third-year netminder Mack Guzda turned in a solid pre-season, going 2-0 while capping things off with a 36-save shutout effort in North Bay on Sunday.

Firebirds, Spirit split closely-matched home-and-home
If the pre-season is any indication, the Flint Firebirds and Saginaw Spirit are in for a battle of the birds in the West Division. Both teams won three exhibition games, with Flint taking a 7-5 road win in Saginaw on Friday before the Spirit struck back, defeating the Firebirds 6-5 at Iceland Arena on Saturday.

Saginaw was led offensively by top 2020 NHL Draft prospect Cole Perfetti (3-6–9) throughout the pre-season while rookie defenceman Mitchell Smith (1-6–7) was among the league’s offensive leaders from the blue line. Jake Goldowski (4-1–5) led Saginaw in the goal-scoring department while Philadelphia Flyers prospect Mason Millman (1-4–5) picked up five points over two games before departing for NHL camp.

Clarke makes his mark
Fourth overall OHL Priority Selection choice Brandt Clarke (5-5–10) busted out for 10 pre-season points, finishing in a tie for the league lead. The 6-foot-1 defenceman recorded a hat-trick in his second exhibition contest, helping the Barrie Colts take a 6-3 win in Owen Sound. Clarke proceeded to record points in the next four consecutive contests, picking up where he left off as a member of the OHL Cup champion Don Mills Flyers last season when he put up 113 points.

De Simone breaks out for 10 points
While the Niagara IceDogs are in good hands offensively once Akil Thomas and Phil Tomasino return from NHL camps, some younger talent emerged in the pre-season, with somoophomore winger Jonah De Simone (7-3–10) finishing in a tie for the league scoring lead. The 17-year-old former fourth round pick had points in all five of Niagara’s pre-season contests including back-to-back two-goal efforts in a home-and-home with Peterborough last weekend. Niagara went 1-2-0-2 but gave a number of their young players a chance to show what they can do.

Butler in for a big season
Peterborough Petes winger Cameron Butler (5-3–8) scored five times in as many games and led the league with 23 shots on goal. The 6-foot-4, 197Ib. former second round pick netted 18 goals in his rookie season, a total he’ll build off of this season as he approaches the 2020 NHL Draft. The Petes played to a 3-1-0-1 pre-season mark.

Otters shut the door defensively
Erie Otters netminders Daniel Murphy and Aidan Campbell combined to surrender a league-low eight goals over their four exhibition games as the returning veteran Murphy included an 18-save shutout in the process. Sophomore winger Brendan Sellan (4-4–8) set the pace for Erie offensively while newcomer Austen Swankler (1-3–4) showed early signs of being an offensive contributor. The Otters finished with a 2-1-0-1 pre-season record.

Spitfires show well with 3-1 record
The Windsor Spitfires rounded out their pre-season with a nine goal explosion against the Sarnia Sting on Sunday. The Spits were led in pre-season scoring by overage winger Cole Purboo (4-1–5) who has led the club offensively in each of the past two seasons. Newly added winger Matthew Maggio (2-3–5) registered five points in four games and 2020 NHL Draft prospect Will Cuylle (3-1–4) led the club with 20 shots on goal. Second round draft pick Pasquale Zito (2-2–4) made an early impression with four points in as many contests.

Storm’s new additions show their stuff
The defending champion Guelph Storm are losing a number of veterans to graduation, but new additions in Andrei Bakanov, Jacob Roach, Jacob Maillet and Danny Zhilkin stepped into the lineup and made a good first impression. Bakanov, the club’s first round CHL Import Draft selection, recorded four points (2-2–4) over five games as did Roach, an 18-year-old free agent signing who put up 93 points (29-64–93) in Junior B last season. Two of the Storm’s top selections in the 2019 OHL Priority Selection, Zhilkin and Maillet both saw plenty of ice and helped the young team skate to a 2-2-0-1 record.