OHL Announces Top Performers of the Month for December 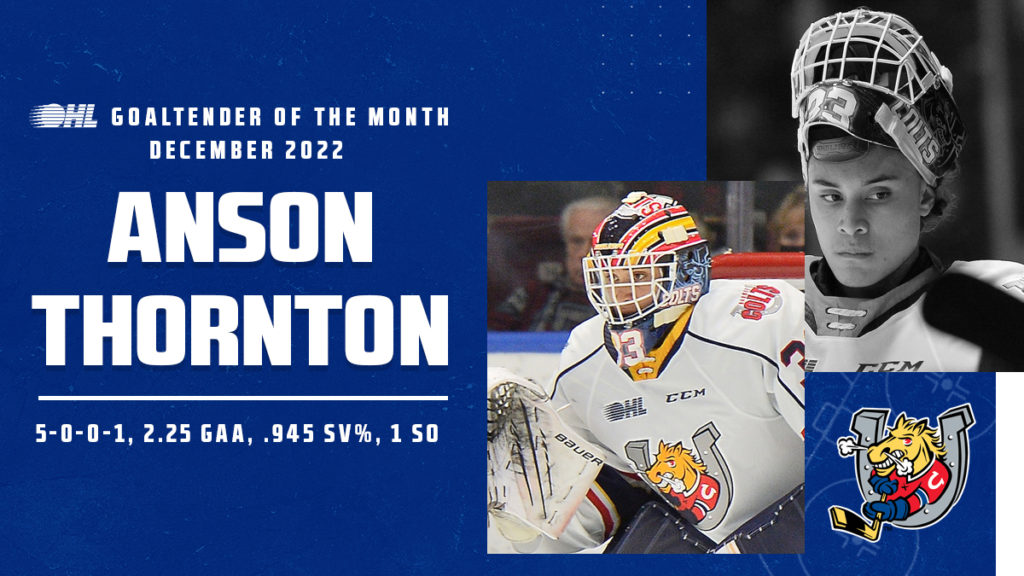 OHL Goaltender of the Month – Anson Thornton (Barrie Colts):
Arizona Coyotes prospect Anson Thornton of the Barrie Colts is the OHL Goaltender of the Month for December, playing to a 5-0-0-1 record with a 2.25 goals-against average, .945 save percentage and one shutout. Thornton was busy, making at least 36 saves in all six of his December outings. He stopped 38 of the 40 shots that came his way on Dec. 4th as the Colts defeated his former Sarnia Sting teammates 3-2 in overtime. He turned aside 45 shots the following week at home as the Colts defeated the Saginaw Spirit by a score of 5-2 on Dec. 8th. Thornton registered another 40-plus save showing on Dec. 17th as Barrie defeated the Central Division-leading North Bay Battalion 6-3. He closed out December with his first shoutout of the campaign on Dec. 31st, making 38 saves as the Colts defeated the Guelph Storm 8-0. Thornton earned star of the game recognition five times in December, three times being named first star while being named second star twice.

A 19-year-old Oshawa, Ont. native, Thornton owns a 10-6-1-2 record with a 3.40 goals-against average and .906 save percentage through 19 games in his second OHL season. The 6-foot-4, 187lb. goaltender has played to a career mark of 18-22-1-2 with a 3.77 goals-against average and .893 save percentage in 45 regular season games between Barrie and Sarnia. Thornton signed an entry-level NHL contract as a free agent with the Arizona Coyotes after attending the team’s training camp in October 2021. He was originally Sarnia’s first round (3rd overall) pick in the 2020 OHL U18 Priority Selection. Thornton won an OHL Cup championship with the Don Mills Flyers U16 program in 2019.