Milestone Evenings for the Colts in Sudbury 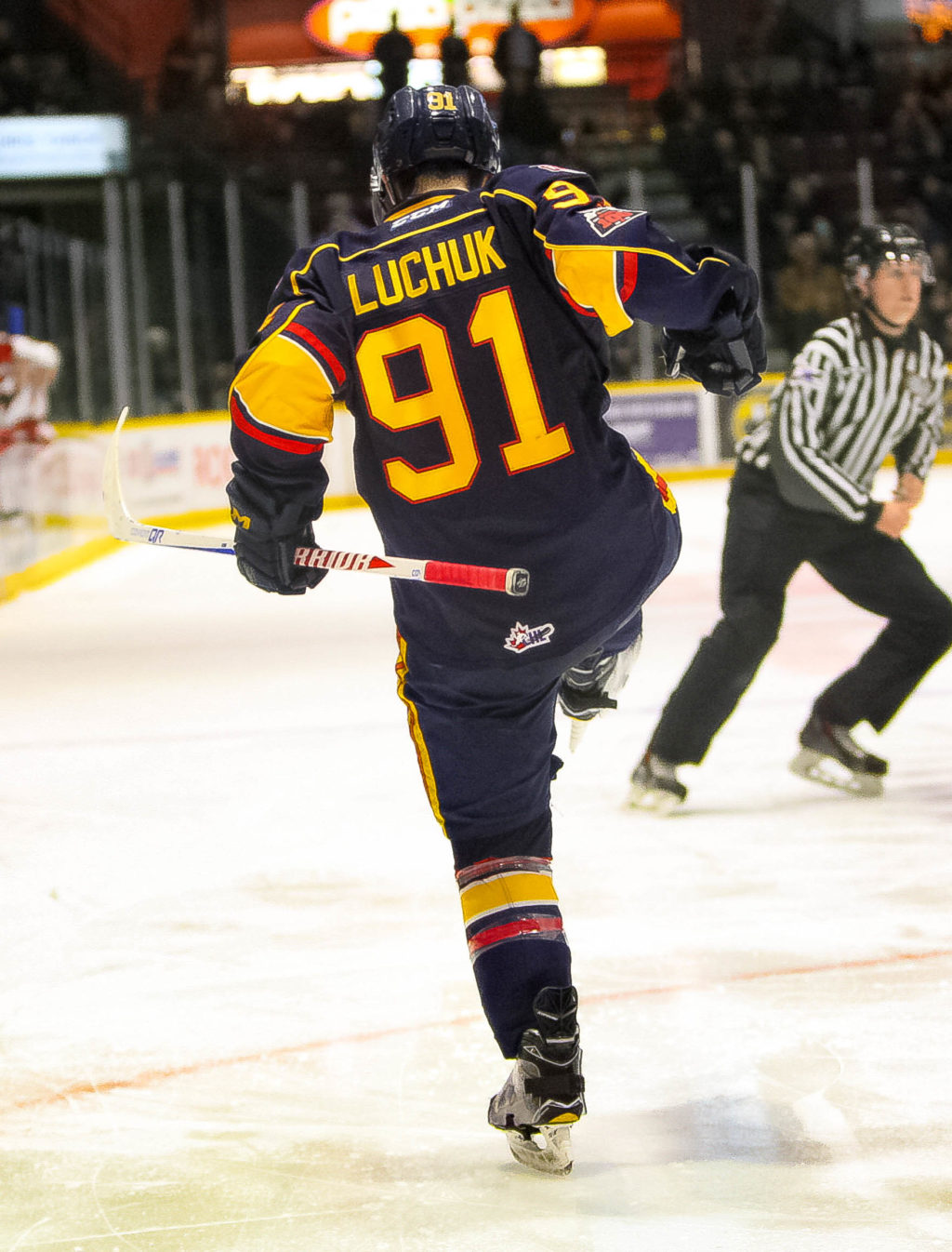 Barrie’s Aaron Luchuk and Dmitry Sokolov his the 50 goal milestone in Barrie’s 6-4 win over the Wolves on Friday night.

Friday night in Sudbury was a game that had little to no meaning for either team. For the Colts they saw themselves locked into the 2nd seed in the Eastern Conference no matter what the result was. As for the home team, Sudbury was playing out the games to see where they would be selecting in the upcoming OHL draft.

Before the game the Sudbury organization paid a tribute to former Wolves forward and current Colts forward Dmitry Sokolov for his time in a Sudbury uniform.

The scoring would get started early in the opening frame. Lucas Chiodo found himself all alone on a breakaway as he beat Jake McGrath blocker side to open the scoring. Zach Magwood and Mathew Hill assisted on Chiodo’s 29th goal of the season.

One of the biggest stories coming into the final two games of the season for Barrie was the fact that Aaron Luchuk and Sokolov were coming in with 49 goals each. One of those guys hit 50 very early in this one.

Dmitry Sokolov was sprung on a partial break and of course, in front of his former home club he did not disappoint and backhanded home number 50 on the season. The goal put him in lone spot for the OHL lead ahead of his teammate Luchuk for the time being.

Barrie wouldn’t stop. It was the top line again. This time on a 3 on 1 it was Andrei Svechnikov taking the pass from Sokolov and snapping it home for his 38th of the season. The point extended his point streak to 22 games, which is the longest streak in the OHL this season.

In the second period it took a while for Barrie to get their first shot, but the Wolves didn’t pose much of a threat during that time. Finally the Colts would get something going as a shot from the point by Tyler Tucker deflected off Jason Willms in front and into the back of the net. The goal was his 28th of the season. Jaden Peca drew the second assist on the goal.

The Wolves would finally find the scoreboard. It was MaCauley Carson getting the puck in the slot and beating Kai Edmonds who got the start for the Colts Friday night. The goal cut the lead to a 4-1 Barrie lead.

Just under a minute into the third period Darian Pilon would have the puck come out to him in the slot as he potted it past Edmonds to cut the lead in half.

It was more Sudbury, as the period would continue on. This time it was Darians twin brother Drake Pilon sliding home the wraparound to bring the game to 4-3.

The comeback would be complete, as the Wolves would tie it just past the midway point of the 3rd period. Kyle Rhodes hammered a shot from the blueline to tie things up at 4.

Not long after another Colts milestone was reached. This time it was Aaron Luchuk putting home his 50th goal of the season to restore the Barrie lead. Svechnikov and Lucas Chiodo added assists on the milestone

They would add some insurance. On a powerplay with just over four minutes to go it was Svechnikov putting one home. His 39th of the season was assisted by Luchuk and Sokolov to give Barrie the 6-4 lead.

The season wraps up tomorrow night as these two teams face off once again, this time in Barrie. Puck drops at 7:30pm as the Barrie Colts will host their annual St. Patricks Day game. Don’t forget your green!