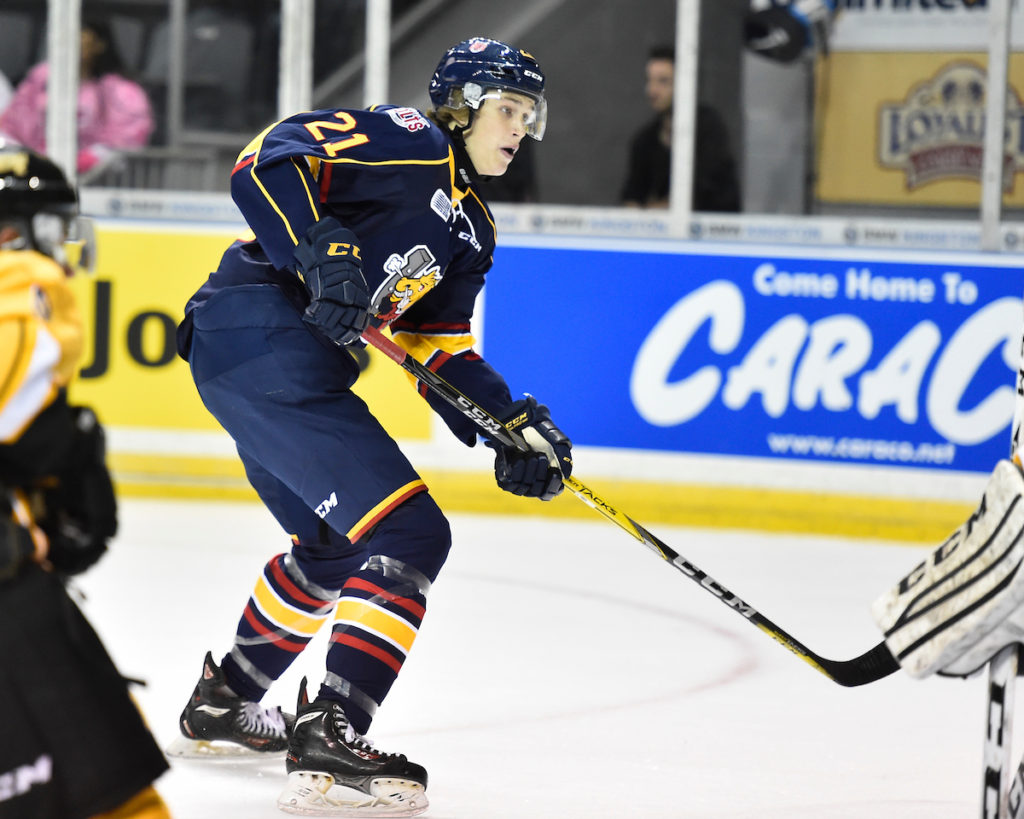 A three goal second period was the difference in a 4-2 victory for the Hamilton Bulldogs on Friday night.

The second period has been a struggle for Barrie as of late and tonight was no different. It all started early in the frame when Barrie failed to clear the puck a couple times which resulted in Will Bitten stepping out front to bury his 17th of the season past Christian Propp who made the start.

Later on a Hamilton power-play it was Bitten who was the setup man. He found Matthew Strome streaking in the slot who buried it past Propp for his 24th of the season.

Shortly after that it was Strome again, this time at the end of a penalty kill Hamilton was able to strike. Once again from the slot Strome put it home and gave the Dogs a 3-1 lead which held up to be enough for the victory.

Barrie was in Hamilton fresh off an overtime victory a night ago against the Saginaw Spirit. This weekend started off five of the next six with three in three’s for the club, so you know it’s not going to be an easy stretch.

Early in the first period Barrie would jump out to the quick 1-0 lead. It all started with Kirill Nizhnikov working his way down ice towards the Hamilton zone. He used his quick hands to juke a defender before sending it over to Jason Willms who had it go off of his skate and past Dawson Carty for his 10th of the season. The play would be reviewed but would stand as called. Joey Keane picked up the second assist on the opening goal of the game.

With less than six minutes to go in the opening period Jason Smith was sent in all alone but was denied by the right pad of Carty keeping the lead at 1-0.

Hamilton’s best chance came with just over three minutes remaining in the period as Luke Kutkevicius stepped into the slot and fired one glove hand on Christian Propp but was stopped. Propp got the nod on this night as the Milton, ON native calls this one as close to a hometown game as possible.

Barrie was awarded a five on three with two minutes to go in the opening period but weren’t able to capitalize finishing with the score 1-0 after twenty.

In the third Barrie would get the next marker which was crucial as one more and it seemed like things were going to get out of hand. After scoring his first career goal a night ago, Curtis Douglas didn’t take long to get his second. After Keane was able to keep the puck in at the blueline he fired it in off a stick and right to Douglas who put it home to cut the lead to one less than three minutes into the third.

Strome would finish off the hat-trick by putting home the empty netter to put a finish to this one.

Barrie will finish up a three in three tomorrow night at home against the Owen Sound Attack. This will be the first time since the trade deadline that former Captain Cordell James will be facing his old mates. Puck drop is 7:30pm at the Barrie Molson Centre.