Magwood Wins it in Overtime for the Colts 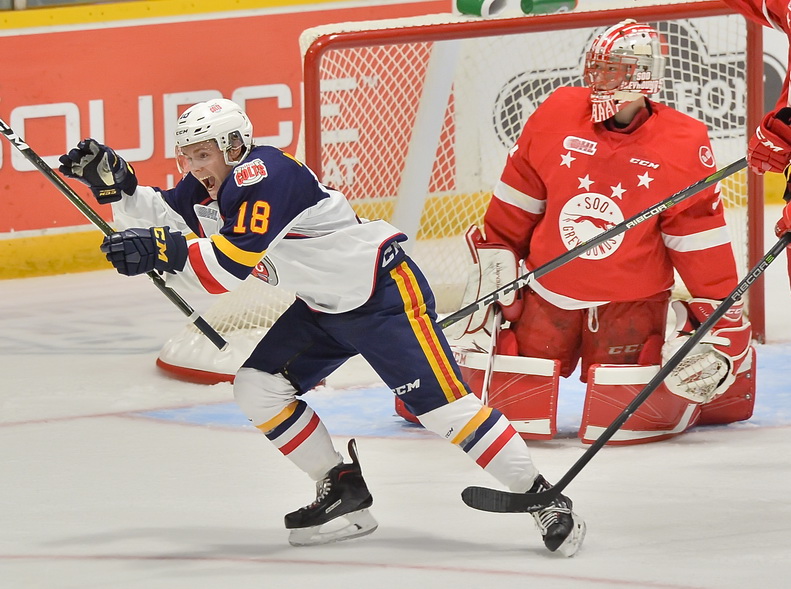 The Colts would comeback late to tie things up and Zach Magwood would be the hero in overtime as the Colts skated to a 4-3 victory over the Sault Ste. Marie Greyhounds.

Alexey Lipanov would have a three point with a goal and two assists and Joey Keane and Andrei Svechnikov would each add their own tallies for the win.

The Barrie Colts would welcome the Sault Ste. Marie Greyhounds to the Molson Centre Thursday night for the first of three games on the weekend.

Prior the opening face-off Barrie would present TSN 1050’s Overdrive crew of former Colt Bryan Hayes and fellow co-hosts and former NHLer’s Jamie McLennan and Jeff O’Neill with their very own Colts jerseys as they dropped the puck to kick off the game.

For much of the opening period things would remain fairly quiet, as neither team would generate much in the way of scoring chances. It wouldn’t be until the 11:52 mark of the 1st to see the Colts break through.

While shorthanded the Colts would take the first lead of the game. Andrei Svechnikov would break in attempting to feed newly appointed captain Justin Murray. With the puck coming back to him he’d find Alexei Lipanov alone in front to bury his 1st as a Barrie Colt to put the boys up 1-0.

With just over a minute remaining in the 1st the Colts would find themselves on the kill once again.

This time the Greyhounds would convert. Barrett Hayton would skate in from the right circle and bury a backhand up top to tie things at one after twenty minutes of play.

Five minutes into the second frame the Colts would get an opportunity on the powerplay but the biggest scoring chance would come at their own end.

After Leo Lazarev would make one save, the puck would shoot right out to Connor Timmins, he’d quickly fire it, the initial shot being blocked but with a second chance a diving Jason Wilms would save a sure goal to keep things knotted at one.

Just past the midway point of the period the Colts would jump on the man advantage once again. With 30 seconds remaining in the penalty Joey Keane skating down the right side would snap a perfect shot over the blocker of Soo goalie Matthew Villata for his 1st of the season to give the Colts the lead back.

The Greyhounds would outshoot the Colts 25-19 but Barrie would hold the 2-1 lead heading into the final frame.

Less than a minute into the third, some sloppy play in the Colts end would cost them and the puck would wind up in the back of their net. After an unfortunate bounce the puck would come right out to the slot, Ryan Roth would snap one by Lazarev to even things at two.

The Greyhounds would keep the pressure coming and at 12:59 take their first lead of the game. Tim Gettinger would jump on the puck in front of the Barrie goal firing a quick shot to make it 3-2.

With just over a minute to play Barrie would answer right back though. Getting another powerplay chance of their own and with the goalie pulled they wasted no time to get the equalizer.

Winning the draw the puck would quickly be sent on goal and Lucas Chiodo would jump on the rebound to even things at 3 and send things to overtime.

After the Greyhounds would take another late penalty in the final period the Colts would begin overtime with the four on three advantage.

The boys would go to work and just over a minute in, Zach Magwood would be the hero tipping home a point shot from Joey Keane for his second of the season. Also assisting on the winner was Murray.

The Colts are right back at it tomorrow night as they travel to Sudbury to take on the Wolves and return home Saturday night to host the Hamilton Bulldogs for a 7:30pm puck drop.