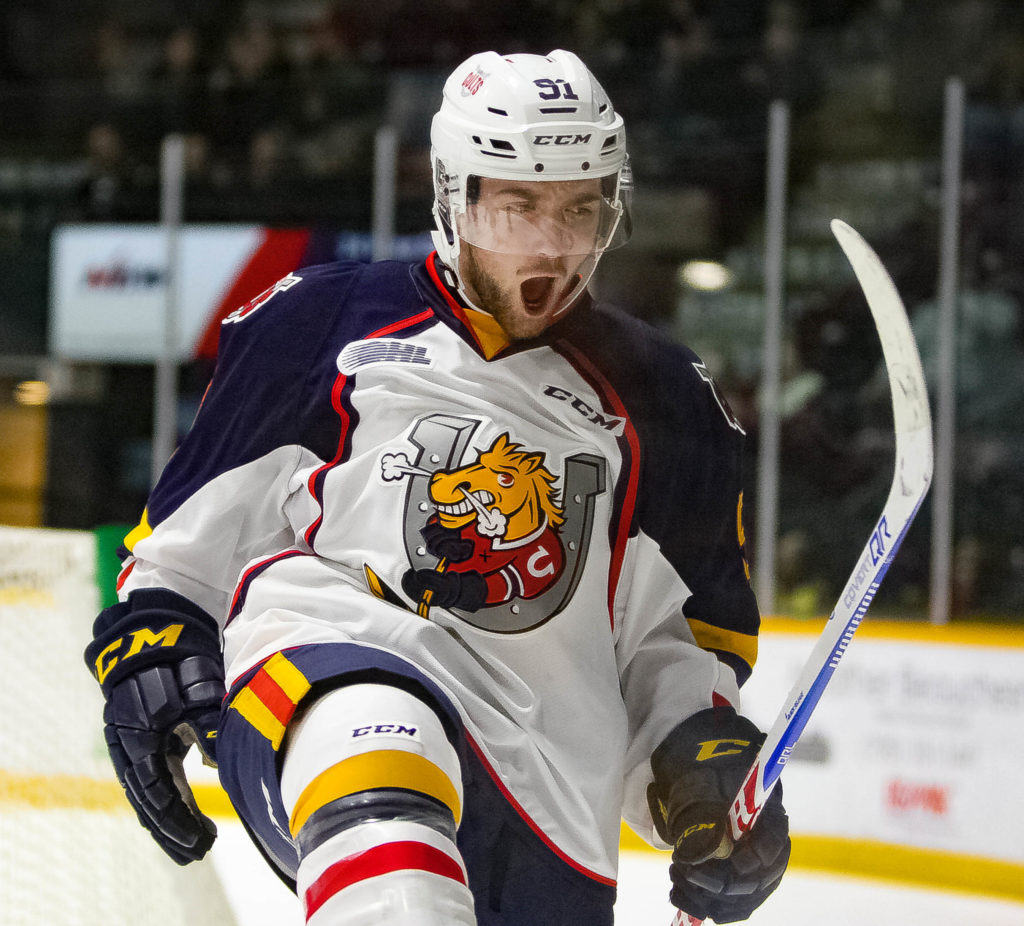 It would be a night of milestones for Aaron Luchuk. The Colts forward would score a goal and 3 assists earning his 100th  career OHL goal and 100th OHL assist on the same night while surpassing 200 career OHL points leading the Barrie Colts to a 6-2 victory over the Saginaw Spirit.

Once again the Colts would be kicking off another busy weekend beginning Thursday night with the first of three games in three nights hosting the Saginaw Spirit.

After a miserable finish to last weekend, the Colts would look to get back on track in the same fashion the previous week began with a huge first period potting four goals in the span of five minutes that would prove to be all the Colts would need on this night.

Luchuk would get things started at 12:21 of the first. Skating over the Spirit’s blue line he’d let a wrist shot go from the top of the circle. Saginaw starting goalie Evan Cormier would get a piece of it off the blocker but trickled behind him giving Barrie the first lead of the game. Tyler Tucker would pick up the lone assist on Luchuk’s 35th of the year.

Just two minutes later the same line would connect again. Andrei Svechnikov would feed Dmitry Sokolov going hard to the net to tap in his 23rd of the season. Luchuk would also pick up an assist on the play.

The offense would keep coming, this time it would be Svechnikov’s turn. With just under three minutes remaining in the opening period T.J. Fergus would find Svechnikov at the side of the net to roof his 17th goal on the campaign and Luchuk would get his second helper in the game.

Just a minute later, Ben Hawerchuck would finish Cormier’s night off. After winning the battle below the goal line Zach Magwood would find Hawerchuck alone in the slot to snipe his 9th of the season to give Barrie a huge 4-0 lead after twenty minutes of play.

With the physical play picking up in the second the Spirit would attempt to shift the momentum.

Nearing the midway point of the second Saginaw would break through on the powerplay. Jake Goldowski would find Blade Jenkins at the side of the net to sqeak one past Colts starter Leo Lazarev.

In the third, the Colts would continue to press with their own chances.

Just over five minutes into the final frame the Colts would regain the 4-goal lead. Off a turnover in the Spirit’s own end, Luchuk would feed Sokolov all alone in front of the Saginaw goal making a quick deke to the back of the net for his 2nd of the game and 24th of the season.

Nearing the midway point of the period the Spirit would answer right back with one of their own. Ryan Stepien would pickup the loose rebound in front of Lazarev backhanding a shot to reduce the lead to three.

Before the period was out the Colts would add one more. Jason Willms would send a backhand on goal. With the scramble resulting in front, Ryan Suzuki would find the loose puck to bang in his 9th goal of the season.

Next up, the Colts will play a pair of Central division rivals first heading down to the Hershey Centre to face the Mississauga Steelheads Friday night. Saturday night the Colts will return home for a 7:30pm puck drop versus the Niagara Icedogs.