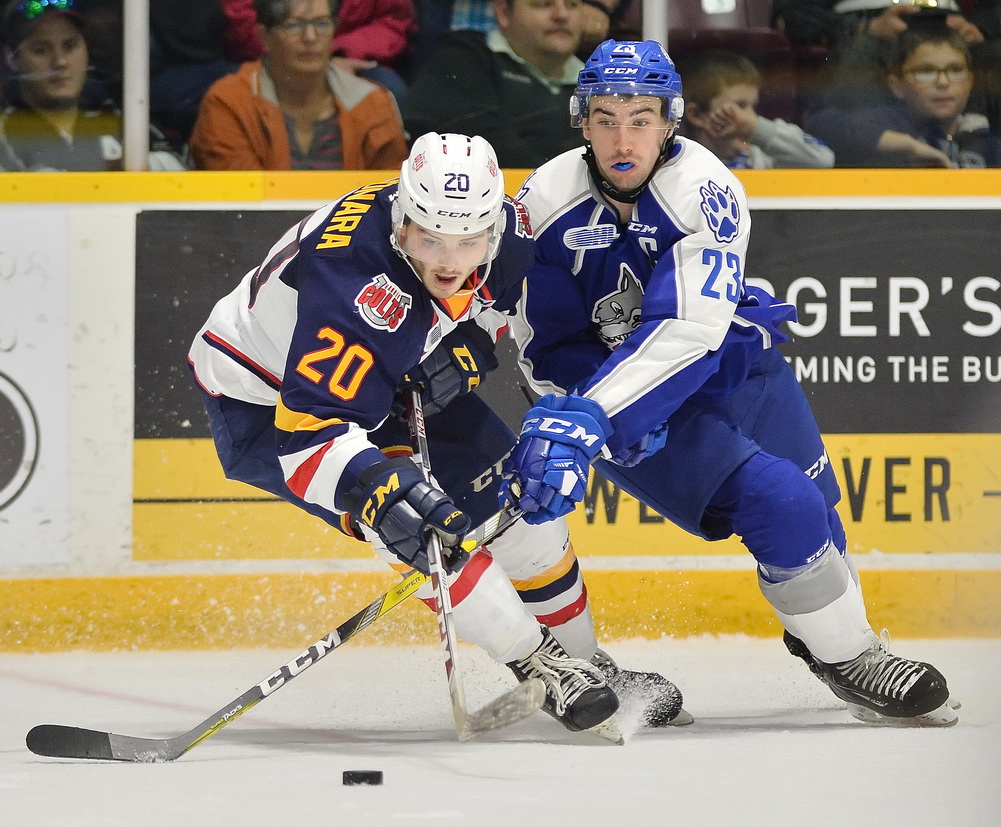 In Round Two of this Central Division battle, the goals were kept to the absolute minimum.

Macauley Carson converted a shorthanded goal 7:43 into the second period, as the Wolves beat the Barrie Colts 1-0 Thursday evening.

The visitor’s Owen Gilhula took a tripping penalty at 17:27 of the middle frame and for the second consecutive game the Colts gave up a shorthanded marker. Chandler Yakimowicz caused a turnover at the blueline and streaked down the right wing. He managed to center a bouncing puck over to Carson for his third goal of the season.

The second rendition of this matchup featured a much more balanced first period than the first one in Sudbury that saw the Wolves outshoot the Colts 20-3.

First-period action saw both teams fail to capitalize on key opportunities to strike first with respective 5-on-3 power plays. Shane Bulitka and Liam Dunda took minor penalties 37 seconds apart, but the Colts’ best chance came off the stick of rookie Kiril Nizhnikov who nearly converted a solo effort off the rush.

Penalty killing has surely been one the Colts best attribute early in the 2016-17 campaign. While still scoreless almost midway through the second, Jason Willms almost converted on a neutral-zone turnover when his wrister beat Wolves netminder Zach Bowman, but not the post. Dale Hawerchuck’s squad managed to stay perfect on the penalty kill, dealing with all six infractions called against them.

The Colts own Zachary nearly opened the scoring with roughly seven minutes to go in the second. Magwood blew by the Wolves rookie Owen Lalonde, but couldn’t get the shot over Bowman’s sprawling pad when in all alone.

Gilhula nearly managed to double the Wolves lead to 2-0 on a last-second two-on-one but the Colts veteran goalie, David Ovsjannikov, managed to slide across to deny the prime scoring chance with a blocker save. Ovsjannikov turned aside 32 saves, while his counterpart Bowman stopped all 20 for his first shutout of the season.

Shortly after, a nice toe-drag at the blue line allowed Adrian Carbonara enough room to let his own wrist shot go, but he too rang iron. The Maple, Ont. Native once again had another chance to tie the game after teammate Ben Hawerchuck took a hooking penalty midway through the final frame. Carbonara picked defenceman Kyle Capobianco’s pocket behind the net, only to have his backhand turned away.

The Colts’ final chances to tie the game came on late power plays, thanks to high sticking and cross-checking penalties to Alan Lysczarczyk and Dmitry Sokolov respectively. But to no avail.

The team’s three-game homestand wraps up Saturday night when the Colts welcome the Kitchener Rangers to BMC.