Kingston Evens the Series at Two 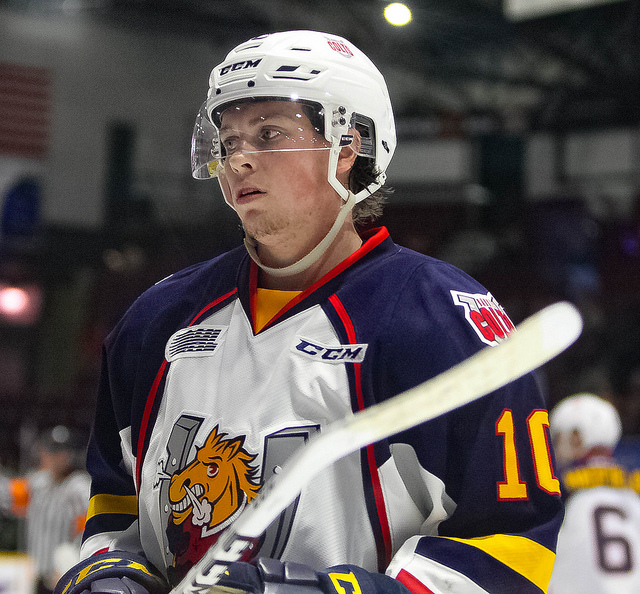 A shorthanded goal late in the second period would hold up to be the winner for the Kingston Frontenacs in a 4-2 victory, tying the series at two.

It was a physical start to this game as both teams came out throwing big hits to set the tempo for game four.  The two teams went back and forth with chances.  Firstly it was Zach Magwood set up in front of the goal, but was denied by Jeremy Helvig.  Down the other end it was Leo Lazarev with a massive save coming across his crease to deny the Fronts from getting on the board.

Later in the period, the scoring would get started.  On a Barrie powerplay it was the number one unit showing off some beautiful passing. First it was Dmitry Sokolov dropping it down to Andrei Svechnikov who went cross ice to Lucas Chiodo who one-timed it home for the games opening goal.  It was his 5thgoal of the playoffs.

Early in the 2ndperiod the Frontenacs would bounce back and tie the hockey game.  It was Gabriel Vilardi putting home the rebound at the side of the goal.

Just after the TV timeout in the second period it was Barrie regaining their one goal lead.  Right off the faceoff win by Aaron Luchuk, it was Svechnikov poking it back to Sokolov who slapped it home for his 8thof the playoffs.

The lead wouldn’t last long as Kingston came right back. It was Vilardi again grabbing the loose puck in the slot and showing off his great shot as it squeaked through Lazarev to square the game at two.

Minutes later Barrie would be rewarded with a powerplay but it was Kingston who would strike. After a turnover at the Frontenacs blueline the puck would work its way all the way down into the Barrie zone. Linus Nyman grabbed the puck and went top corner on Lazarev to give the home team their first lead of the game.

The Colts would go the entired third period firing many shots towards the Kingston net looking for the tying goal but couldn’t find it.

With the net empty the Frontenacs would pick it up and skate it into the Barrie net putting a seal on this one as they take both games in Kingston by a 4-2 final.

The series will now shift back to Barrie for game five on Thursday night, before heading home for game six which is now necessary as the series is now tied 2-2.