“It was my second home”: What Barrie Represents for Andrew Mangiapane 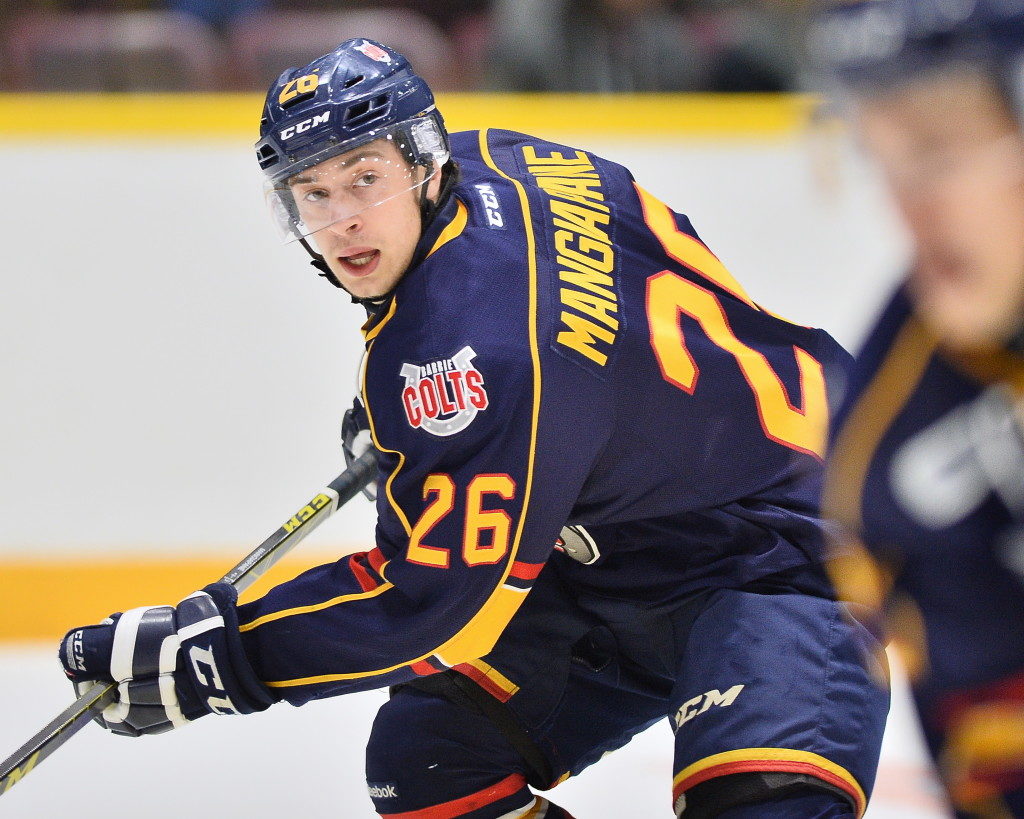 For many, the Ontario Hockey League represents a pit stop prior to a final destination. A building block before something greater. Another jersey to hang on the wall when the dust settles.

A fair bit of today’s NHL talent come from humble beginnings. Smaller markets in closer-knit cities that represent something more than the bustling environments of Toronto, Montreal or New York.

For the most part, those cities become afterthoughts when the NHL comes knocking. But for a select few, making the trip back to local communities and experiencing the grassroot connections once more is something they not only cherish, but look forward to.

Andrew Mangiapane is a prime example.

An Ontario-native, and a graduate of the Barrie Colts program, Mangiapane returned to Barrie earlier this summer to participate in the Boots and Hearts Barn Burner charity hockey game. Mangiapane, alongside other notable NHL names, made the trip to Barrie to kick off the annual Boots and Hearts music festival.

“Everything comes back. The rink name has changed since I was playing here last, but everything is more or less the same. New paint maybe,” laughs Mangiapane when asked about what comes to mind first upon his return to the city. “The dressing room looks the exact same as I’ve left it, so it brings back a lot of memories. Barrie was really my second home, so it’s awesome to come back just to see everything.”

Mangiapane spent parts of three seasons in a Colts uniform and quickly cemented himself as one of the league’s most prolific offensive talents, putting up back-to-back 100 point seasons in 2014-15 and 2015-16 respectively.

With Mangiapane and future San Jose Shark Kevin Labanc on the same line, the Colts had no shortage of offensive talent, something that Mangiapane was quick to comment on in his return to Sadlon Arena.

The rafters of Sadlon Arena is a familiar place to be for the Toronto Jr. Canadiens product, as Mangiapane currently ranks fourth in franchise history in goals, sixth in assists, and fifth in total points.

With a pair of stellar seasons under his belt, Mangiapane was drafted in the sixth round, 166th overall by the Calgary Flames in the 2015 NHL Entry Draft. And while he did return to the Colts for an additional season before making the jump to the professional level, Mangiapane credits Rasmus Andersson, one of his junior hockey teammates from Barrie, for playing a big role in his career.

“It’s crazy right? When Razzy first came here [to Barrie], he was a pretty quiet guy. His English wasn’t the best, it was a little hard to understand him,” Mangiapane laughs.

“But our friendship just kept on growing. I don’t know where I’d be without Razzy.”

Little did he know, Mangiapane’s relationship with Andersson would only evolve from Barrie. Andersson was also drafted by the Flames in 2015, albeit in the second round, and would later join Mangiapane through the ranks of the Flames organization.

“We started in Barrie together, we went down to Stockton together (the Flames American Hockey League affiliate at the time) and then we made Calgary together all at the same time. He’s a real close friend of mine and we just had the same path to the NHL.”

“The friendships you form through hockey are so crazy. Even guys I don’t play with now, we still keep in contact and we still talk about our memories from junior,” Mangiapane explained, looking around the dressing room.

“These friendships last a lifetime.”

But it’s not just the friendships that stand out to Mangiapane. The coaching staff, as he puts it, were instrumental in building the foundation of his NHL career.

In fact, he credited Barrie’s coaching staff and front office specifically for giving him a chance to continue playing hockey at a competitive level.

“Todd Miller, Dale Hawerchuk and obviously Howie Campbell, those guys brought me in when nobody else was giving me a chance. I really owe my career to those three guys.”

The late Dale Hawerchuk was at the helm of the Colts between 2010 and 2019, and Mangiapane played all three seasons of his junior hockey career under his development.

And there, as many of Mangiapane’s teammates have confirmed, is where the difference truly was. Hawerchuk was simply a player’s coach.

“Dale gave me the confidence just to play. Like I said, nobody else was even giving me a chance to try out for their team. Dale saw the type of player that I was and he just wanted me to go out there and play my game,” said Mangiapane, reflecting fondly on his interactions with Hawerchuk.

“He was definitely a player’s coach and he wanted the best for you.”

With a fresh three-year contract to his name, Mangiapane is already gearing up for what promises to be another productive season.

And while Barrie was, in essence, just a pit stop in Mangiapane’s eventual journey to the NHL, he hasn’t forgotten what the city, and the people within it, mean to him.