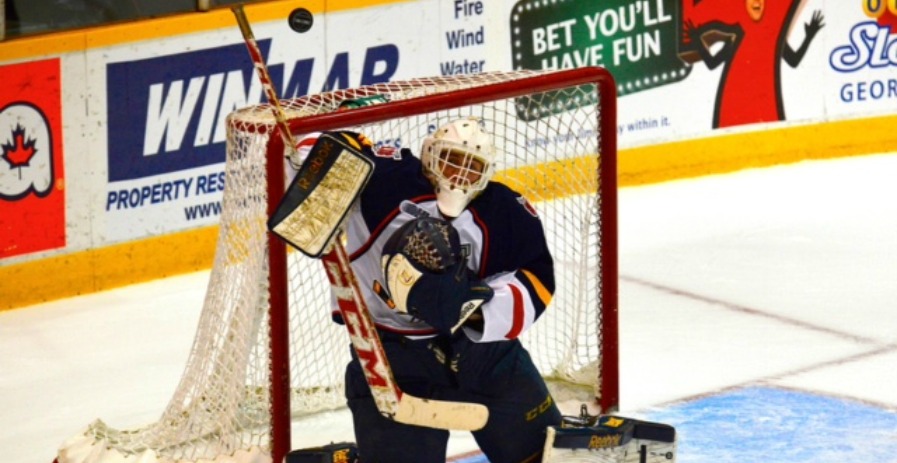 On Thursday night the Sault Ste. Marie Greyhounds were in town to face the Colts for the second and final time this season. Barrie’s offensive struggles continued as they suffered a 1-0 shutout loss despite a strong performance.

The Colts found themselves with a power play opportunity just minutes into the game but they could not capitalize to take the early lead against the OHL’s top penalty killing team.

Sault Ste. Marie would strike first at 13:22 of the first period when forward Blake Speers scored his third of the season on a delayed penalty call to Barrie. Sergey Tolchinsky drove wide to the Colts net before Speers found the loose puck to bang it home. Greyhounds captain Darnell Nurse was also credited with an assist.

Late in the first period the Hounds thought they jumped out to a 2-0 lead but after a short review the goal was disallowed due to a high stick by Andrew Fritsch.

Speers goal was the lone one of the hockey game and proved to be the difference despite the Barrie Colts outplaying Sault Ste. Marie throughout the night.

Shots were 22-19 for the Greyhounds after forty minutes.

The two Thunder Bay, ON natives Blackwood and Murray remained in the spotlight during the third period as they continued to frustrate shooters.

Colts captain Aaron Ekblad had Barrie’s best scoring chance early in the third as he beat netminder Matt Murray but rang the puck off the crossbar.

Greyhounds centre Tyler Gaudet also had a quality scoring chance as he found himself in all alone on a breakaway less than ten minutes remaining in the game, but Blackwood would again shut the door.

In the dieing stages of the hockey game the Barrie Colts pulled their netminder but were unable to put one past goaltender Matt Murray. Barrie heavily out shot the Hounds in the third period 19-7 but remained snake bitten on the score sheet.

Pittsburgh Penguins prospect Matt Murray has now recorded back-to-back shutouts as he made 38 saves on the night for the Greyhounds.

Mackenzie Blackwood had another stellar performance in the Barrie net making 28 saves but is still looking for his first career OHL victory.

The Barrie Colts (3-6-0-1) have now lost six games in a row and four straight but just one goal. The Colts will once again look to snap the losing streak against a Western Conference opponent as the Plymouth Whalers head to Barrie for a contest on Saturday October 19th at the Barrie Molson Centre. Click here for tickets.