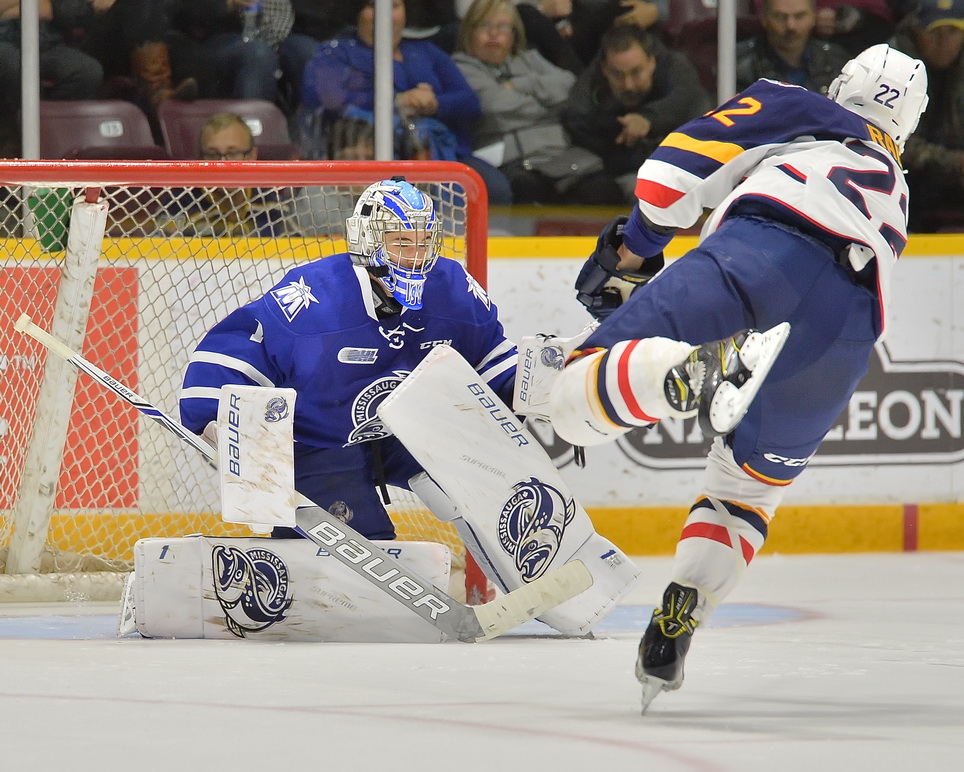 Roy Radke rattled the lone goal in the shootout off the post and in to give the Barrie Colts a 5-4 win over the Mississauga Steelheads Thursday evening.

The Colts looked to have the win all wrapped up after Tom Hedberg’s first OHL goal gave them the late lead, but Ryan McLeod would convert a back-door pass with a minute left in regulation to send the game to overtime tied 4-4.

The club hasn’t won two in a row since they opened the season with consecutive wins over the Kingston Frontenacs and Ottawa 67’s back in September.

Barrie native, Jacob Ingham made the start for the visiting Steelheads and the Colts made sure they welcomed him back to his hometown the best way they knew how: putting one by him.

Radke did the honours. As he cut to the net, his initial backhand was blocked but a with a second chance bouncing back to his stick, he managed to open the scoring with five minutes to go in the opening frame.

Even though the Steelheads had the slight shot advantage after one (11-10), they had their fair share of scoring chances. New Jersey Devils 2016 first-round pick Michael McLeod came down the left side on a two-on-one, only to have his wrist shot turned away by David Ovsjannikov.

Later, Giordano Finoro took away a glorious scoring opportunity while on the penalty kill. He managed to swipe a loose puck away from an open cage as he dove across the ice just below the hash marks.

As he’d been doing the whole game, McLeod continually created scoring chances. His explosive speed drew a Cameron Lizotte slashing penalty midway through the second. With 30 seconds left in the penalty, McLeod tried to cut to the middle off the half-wall, but couldn’t manage to get the shot off between four Colts penalty killers.

Minutes after killing off the infraction, a bouncing puck found its way out front to Scoley Dow, who scored his first career OHL goal at 13:38 to tie the game at one.

Despite trying to contain the Steelheads for most of the second, the tie game was short lived.

The Steelheads Austin Omanski took a tripping penalty roughly two minutes later. On the ensuing power play, Hedberg’s wrist shot from the point was stopped by Ingham but the puck bounced in the air and landed on Lucas Chiodo’s stick. He buried the rebound for this third goal of the season at 15:32.

For the second time, the Colts were unable to pull away and snag the much-needed insurance marker after failing to capitalize on an early third period five-on-three opportunity.

The Steelheads Owen Tippett, a 2017 NHL prospect, followed up on his own shot and jammed his second goal of the year past Ovsjannikov to tie the game 2-2, 4:42 into the third.

Midway through the third Cordell James took a high sticking penalty that saw both teams find the back of the net to even the score yet again to 3-3, with Anthony Stefano’s fifth originally breaking the deadlock.

The Colts look to win three in a row for the first time this season when the Guelph Storm visit the BMC Saturday evening. The puck drops at 7:30p.m.

Thursday Highlights: Night of firsts in Barrie
7 hours ago