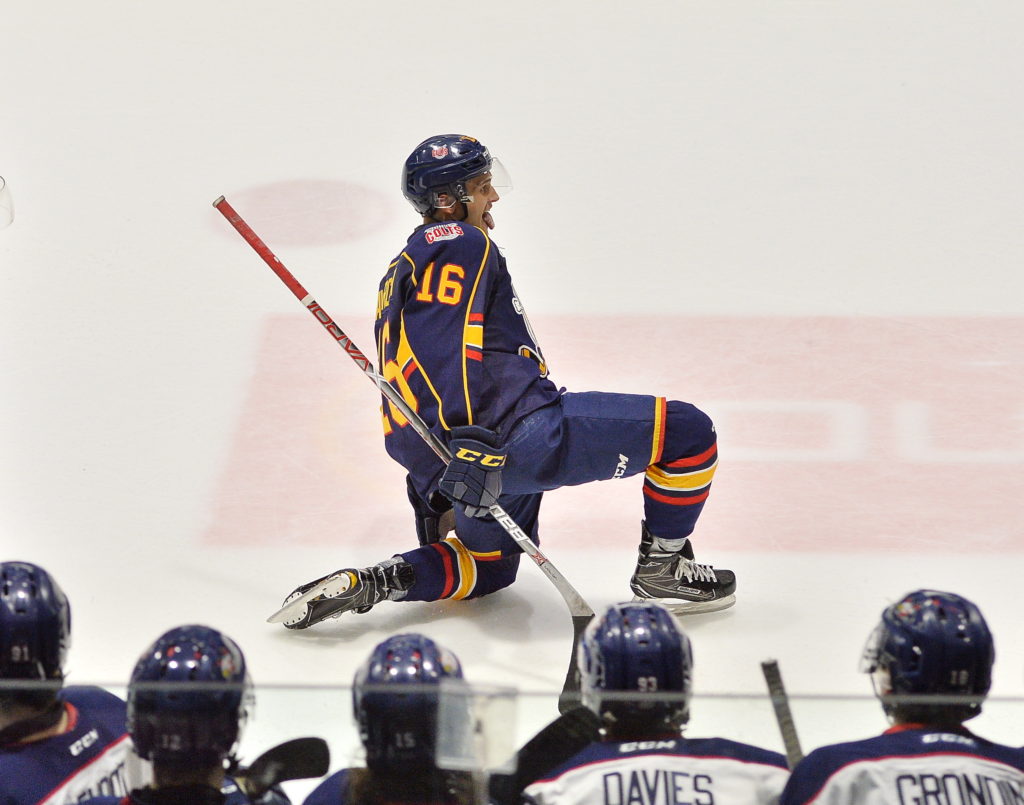 It seems all the Barrie Colts needed to snap a four-game winless streak was a little bit of ‘home-ice advantage’.

Just a minute and a half into overtime, it was Ben Hawerchuck playing the hero netting the game-winning goal in a 5-4 victory for Barrie.

After great passing circulating the Spirits zone, eventually one of Saginaw’s defenders would lose an edge opening the chance for Justin Murray to skate off the wall and feed Hawerchuck who rifled one home from just above the left circle for his second of the game. Lucas Chiodo also assisting on the play.

The Barrie Colts and Saginaw Spirit were meeting for the second and final time this season. Saginaw took the first matchup of the season by a score of 4-2. The Colts coming in winless in their last four looking to get back in the win column would see a great opportunity against a Saginaw team they had not lost to in 5 years at the Molson centre going 4-0-0-0.

It was Saginaw jumping on the board early just 29 seconds in when Marcus Crawford would drop one to Hayden Hodgson snapping one home on the first shot on goal.

Barrie quickly bounced back as Hawerchuck would carry it into the zone having the puck knocked off his stick but would go right to Zachary Magwood who would get the Colts on the board firing one home from the slot to tie it up at one goal a piece, his 10th of the season.

Moments later it was Curtis Douglas jumping on a loose puck in front of the net and scoring his first career Ontario Hockey League goal on the powerplay for the Colts to take a 2-1 lead.

Barrie would add to their lead, late in the first period it would be the reverse of Barrie’s first goal as Magwood dropped to Hawerchuck ripping one top shelf over the shoulder of the Saginaw netminder for his 6th of the year to give Barrie the 3-1 lead.

Three minutes into the second period, Saginaw would come in on a break getting two Spirit players behind the Colts defense but David Ovsjannikov would shut the door.

A minute later though Saginaw would get one back capitalizing on their first powerplay of the game, as Brady Gilmour would tip home a shot from the point to cut the Barrie lead back to one goal.

Midway through the second period the Colts would find themselves getting into more penalty trouble. Ovsjannikov would be up to the task though, being Barrie’s best penalty killer making several big saves to help the Colts kill off the two-man advantage. Many coming against the highly skilled Spirit and Detroit Redwings draft pick, defenseman Filip Hronek.

Three minutes into the final period, Barrie would regain their two-goal lead. Magwood, would collect a bouncing puck in the slot eventually batting his second of the game to the back of the net.

Saginaw didn’t quit and once again cut the Barrie lead in half. At 11:55, Chris Bennett would break into the Colts zone all alone after a perfect give and go to setup a breakaway and beat Ovsjannikov to the glove side on a nice backhand deke.

The Spirit’s momentum would continue. Ovsjannikov would continue to make a number of big saves, but with three minutes remaining in the third period Saginaw tied the game at four. Matthew Kreis would find Hodgson to the left side of the Colts net for the easy back door tap in goal that sent this one into overtime.

Barrie is next in action tomorrow night in Hamilton against the Bulldogs. Puck drop is 7:30pm.

Next Colts home game is this Saturday as we welcome the Owen Sound Attack to the Barrie Molson Centre. Puck drop is 7:30pm.