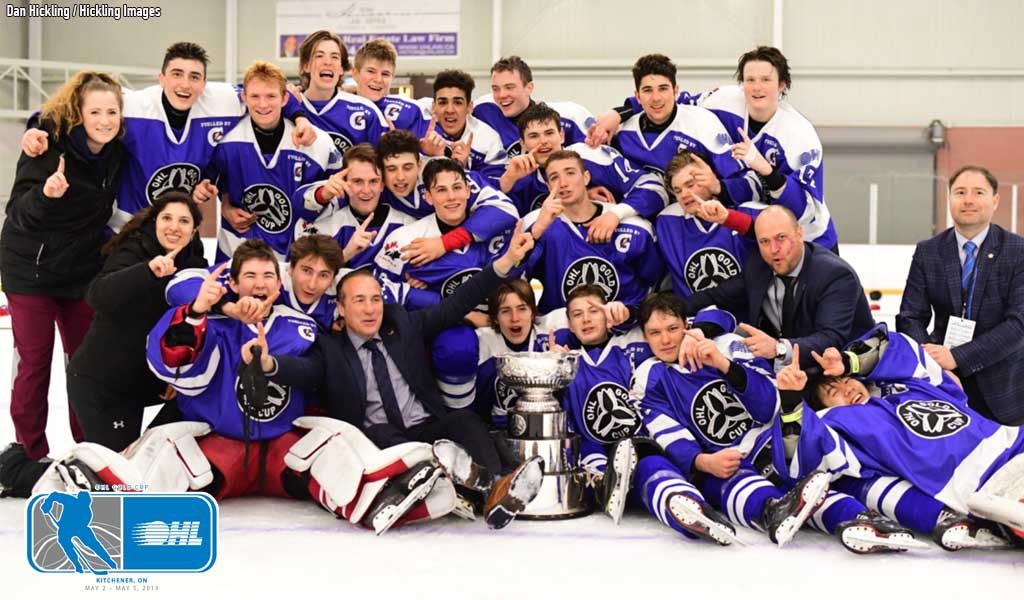 For the second straight year, GTHL Blue are OHL Gold Cup champions after defeating GTHL Red by a score of 5-4 on Sunday at the Activa Sportsplex in Kitchener, Ont.

The ALLIANCE skated to a bronze medal victory while the HEO and OMHA Black were also winners in the event finale.

In goal, HEO’s Patrick Leaver (OSH) led all netminders with a 1.53 goals-against average and .929 save percentage while NOHA netminder Jake Marois turned in a tournament-high 103 saves.

Here’s a closer look at Championship action from Sunday.

The 5-4 victory came in the event’s second consecutive all-GTHL Final as the Red squad thundered out to a 2-0 lead on first period goals from twin brothers Alex and Paul Christopoulos (NB).

Marc Boudreau (SSM) opened up the second period with a highlight reel goal from his knees to put GTHL Red in the driver’s seat 3-0 before GTHL Blue rallied for three goals in seven minutes, coming off the sticks of Oliver Smith (BAR), Tucker Robertson (PBO) and Aidan Shepard (NB).

Brandt Clarke (BAR) reinstated the GTHL Red lead, making the score 4-3 with 5:10 to go in the second before GTHL Blue mounted its comeback to capture the OHL Gold Cup title in the third.

Justin Wu (KIT) earned the win with a 21-save performance in goal opposed GTHL Red’s Josh Rosenzweig (NIAG) who turned aside 23.

? the bar, ? the celly, ? the win ?@SpitsHockey prospect @Pzito61 unleashes the perfect shot with just over a minute left to clinch the @OHLGoldCup title for @GTHLHockey ? pic.twitter.com/arBIygUTVc

Burke scored twice in a third period that saw the ALLIANCE strike five times unanswered to pull away in a lopsided victory. The Elgin-Middlesex Chiefs forward also picked up three assists in the victory.

Maddox Callens (KGN) opened the scoring 5:16 into action to give the ALLIANCE a 1-0 lead after one period. OMHA White’s Parker Hendsbee (OTT) drew things even at one 5:10 into the second but the ALLIANCE responded as first round picks Brett Harrison (OSH) and Deni Goure (OS) got help from Burke to put their team in the lead 3-1.

Ethan Burroughs (OS) got things started on a positive note for OMHA White 30 seconds into the third but that’s all the success they’d enjoy as Landon McCallum (SBY), Marko Sikic (GUE) and Cooper Way (OSH) joined Burke in pouring it on for the ALLIANCE in the final frame.

FINAL | @Ryanburkee9 lead Team @ALLIANCE_Hockey to an 8-2 victory over Team @HometownHockey in the ? game with two goals and three assists.

HEO got off to a strong start, outshooting NOHA 14-9 in the opening period as Stuart Rolofs (LDN) and Jake Coleman (KGN) fired up a 2-0 lead.

Hunter Brown (SSM) connected with Lockhart 3:34 into the second period to increase the HEO lead to 3-0 before NOHA responded with quick goals from Ethan Marois and Mitchell Martin (KIT). Lockhart got help from Coleman and Rolofs to send HEO into the second intermission up 4-2.

Nolan Moxam found the back of the net 3:03 into the third to cut the deficit to one but that’s as close as NOHA would come, falling 4-3 while being outshot 33-24.

Lockhart and Rolofs both finished with a goal and two assists for HEO while goaltender Jacob Osborne made 21 saves.

HNO fought from behind to come within one on goals from Shaymus Stevenson and Jack Michaelis. Alex Atwill (LDN) scored a third period goal but it was too little too late for HNO as they lost despite outshooting OMHA Black 31-30.

Gavin Bradt was the goaltender of record with a 28-save performance, helping OMHA Black hold HNO to an 0-for-11 mark on the man advantage.

For full coverage of the 2019 OHL Gold Cup, click here.