Greaves Shuts Out the Petes 2-0 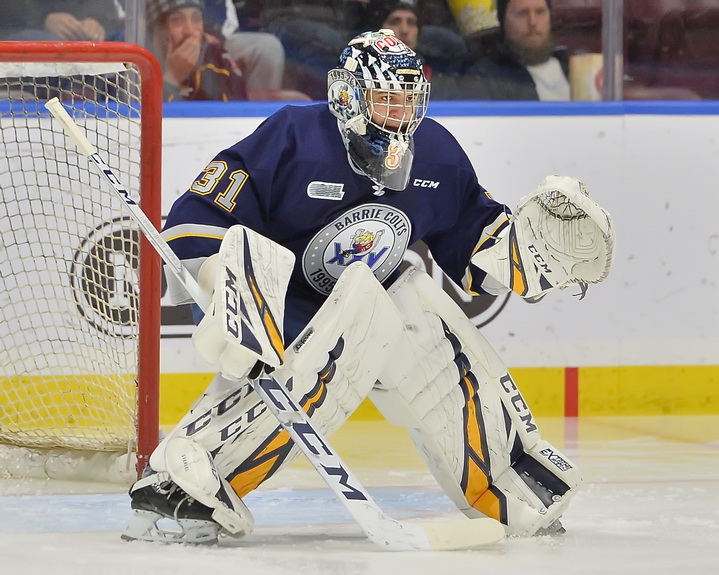 The opportunity to rise to the occasion for Colts net minder Jet Greaves was given to him and did he ever deliver. Greaves making his first start since the end of October, would turn aside 33 shots including a huge left pad save in the dying seconds of the game to preserve the shut out in a 2-0 victory over the OHL’s league leading Peterborough Petes Saturday night.

The Barrie Colts coming off a big win Thursday night which saw teams combine for 13 goals in an 8-5 offensive display would have the boys switch gears and provide an excellent defensive shut down over the league’s fourth best powerplay. The Colts penalty kill came up huge not giving Peterborough any opportunity to strike including a four minute span to end the second in which the Colts were down two men for part of it.

About the midway point of the opening frame, once again it would be Jacob Frasca getting the Colts on the board first. Victor Hadfield would send the puck towards the Petes net. A fortunate bounce would find Frasca while falling to the seat of his pants and tap in the opening goal. Luke Bignell also added an assist on the play.

The shots would remain even through twenty minutes at 10 apiece as Barrie held a 1-0 lead into the first intermission.

In the second period both teams would trade chance on the powerplay but it was the Colts kill that would be put to the test. Greaves facing a barrage of shots, made a number of big stops using every bit of his body to keep the Petes scoreless.

In the third, the Colts would quickly get one back in their favour. Just 11 seconds into the period Peterborough would get called for a slash and open the door for Barrie to add insurance to their lead.

It would only take 30 seconds of powerplay for Tyson Foerster to send it back to Tyler Tucker who blasted the one timer past Hunter Jones making it 2-0. Matej Pekar would get the second assist and the point for Foerster would extend his point streak to 12 games.

Peterborough would pull Jones with two minutes remaining, but it would be to no avail as the Colts shut things down and would skate to the 2-0 victory.

Final shots for the night were 29 for Barrie and 33 for Peterborough.

The Colts will look to finish out the weekend on another winning note as they head up highway 11 to take on the North Bay Battalion Sunday afternoon, puck drop scheduled for 3:00pm at the North Bay Memorial Gardens.