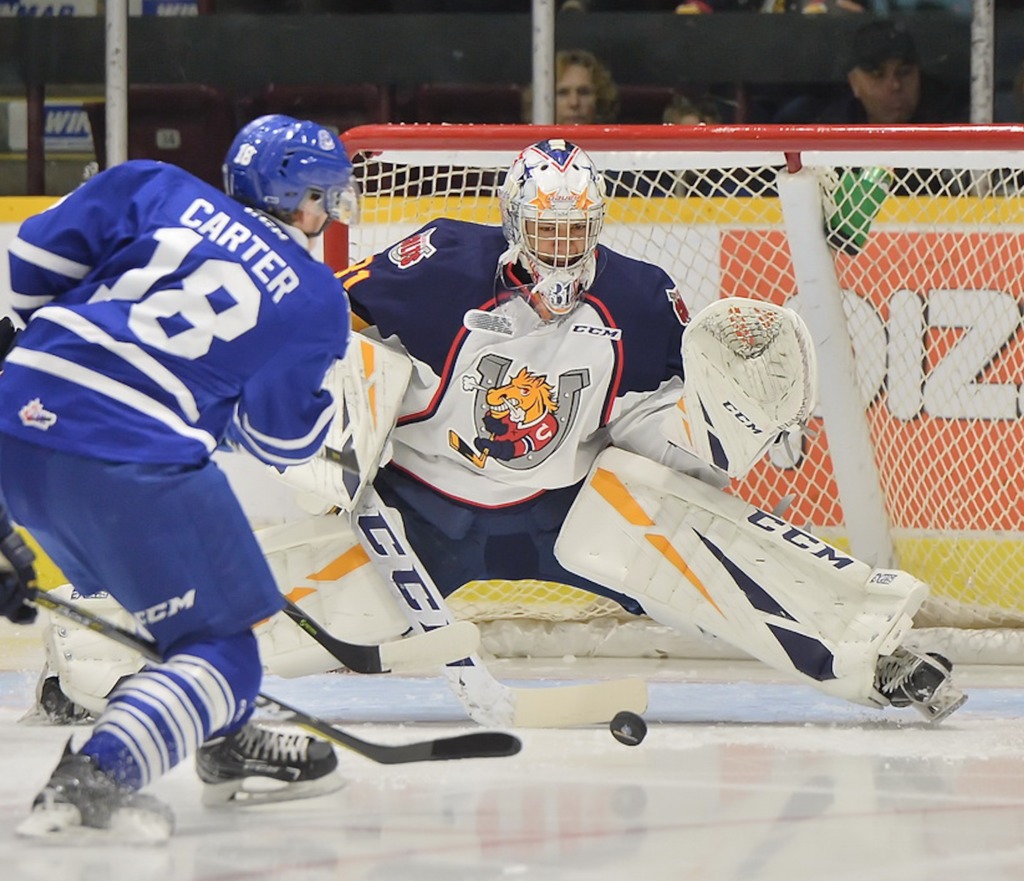 Another 50 save performance by Barrie Colts net minder, Jet Greaves in a 3-1 win over the Mississauga Steelheads Saturday night.

Barrie came into Saturday night playing their third game in three nights and were taking on a division rival, the Mississauga Steelheads, a team they are chasing in the standings.

After a hard fought effort a night before in London, the Colts came out flat with the Steelheads getting the first tan shots of the game, but just like the night before, Jet Greaves was standing tall.

Despite falling behind heavily in the shot category, Barrie struck first.  After a long stretch pass up the ice by Ryan Suzuki, Aidan Brown stayed onside and and was able to slip one by Jacob Ingham to open the scoring.  The goal was Brown’s 9th of the season.

At the end of a chippy first period the Colts found themselves down in the shot category 20-6, but up on the scoreboard 1-0.

Into the second period it was Barrie who would extend their lead.  After a long stretch pass from Dalton Duhart, Suzuki went in all alone and placed a perfect shot top corner to make it 2-0.  Nathan Allensen also assisted on his  17th of the season.

Barrie put out a much stronger effort in the period, but there would be no further scoring as the second frame would end with the home team up 2-0.

In the third, the fish wouldn’t let up.  They kept firing shot after shot towards the goal but Greaves was on his game once again.  Stopping everything he faced, until the end of a Mississauga power play they finally found a way to beat him.  A rebound was put in to cut the lead to 2-1.

Barrie wouldn’t waste much time to restore their two goal lead. After a beautiful centering pass by Suzuki, Sam Rhodes put his 7th of the season in the back of the net to make it 3-1.

It was all shutdown the rest of the way as Greaves continued to hold the fort and keep the Steelheads at bay, turning away the finals shots of the game to total yet another 50 save performance in a 3-1 win.

The Colts are back in action this coming Thursday as they play host to the Owen Sound Attack at 7:30pm.