Gio the Hero in Missy 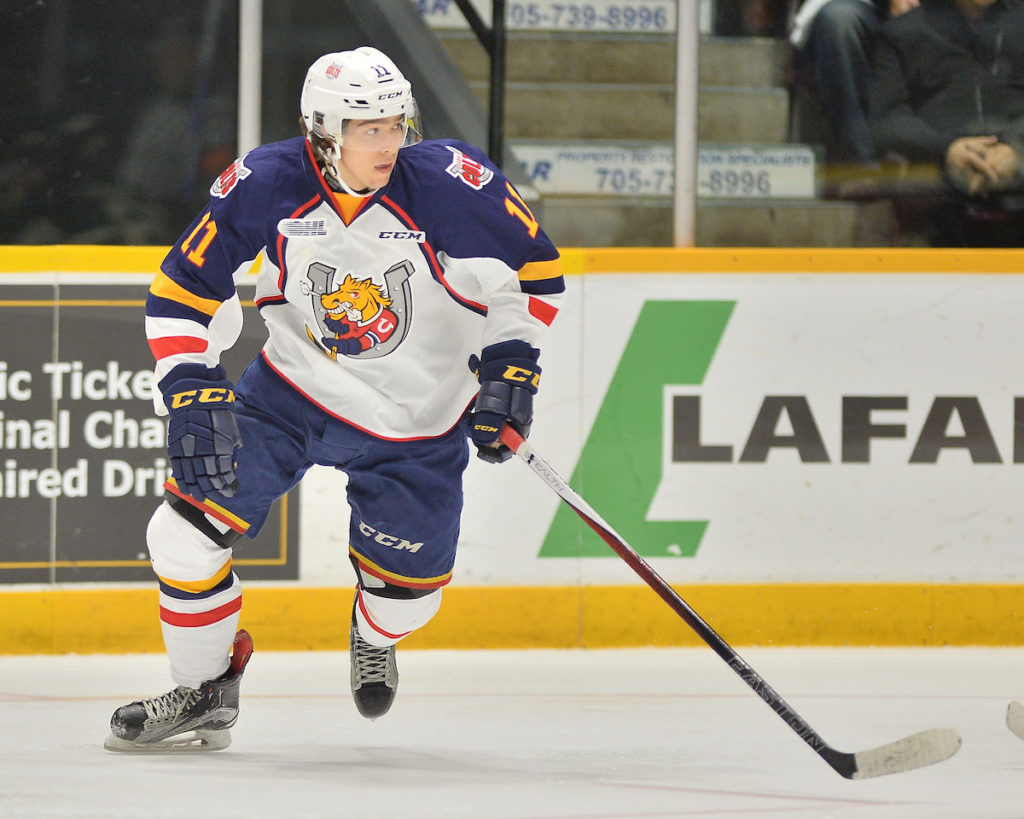 After a couple of great chances early in the overtime period for Mississauga it was Giordano Finoro putting home the game winning goal in extra time for Barrie’s second straight 3-2 overtime victory.

Barrie Colts and Mississauga Steelheads meeting for the second time this season. Barrie took the first matchup of the season 5-4 in a shootout. This one would also need extra time.

Barrie was riding a high, heading into this one defeating the Oshawa Generals in overtime on Thursday night.

Less than five minutes into the game Ryan McLeod broke down the wing and went wide on a Colts defender while cutting to the net and slid one towards the net that Christian Propp had to be careful with as he kept it out. The puck slid through his pads and onto the goal-line, but he was able to get a glove on it before it crossed the red paint.

Both teams were caught in an offensive struggle early on as neither team had any real good chances. Barrie did fire some shots at Steelheads net-minder and Barrie native Jacob Ingham but nothing that came close to opening the scoring.

Less than four minutes into the second period Mississauga was able to create a three on one break that set up a great opportunity in the slot but Propp came up huge. Flashing the leather and keeping the game scoreless.

Barrie would put some pressure on the Steelheads stopping a couple of clearing attempts was rookie defenseman Tyler Tucker who really battled on the blue-line. Tucker then had two shots, after the first was blocked he fired again and it was tipped in front by Colts’ leading scoring Anthony Stefano to get Barrie on the board to make it 1-0.

Just moment’s later Mississauga responded. Spencer Watson fired one from the slot that beat the glove hand of Propp tying things at one. The goal was originally ruled no goal before further review determined the puck did go in the net tying the game at one.

A couple minutes later the puck was bouncing all over the Barrie zone and would eventually find the stick of Owen Tippet who’s projected to go high in this years NHL entry draft, but he found the iron, coming so close to giving Missy their first lead of the game.

Later on a Barrie power-play Zach Magwood had a glorious chance at the side of the net. Joey Keane threw the puck towards the Mississauga goal, which left Magwood all alone with a wide-open cage but he missed keeping the game tied.

At the 2:00 mark of the period Propp had to be sharp again. Coming up with not one but two big stops before the horn could sound in the period. To say he was on his game this evening would be an understatement as he was the main reason the boys were in this one.

Shortly into the third period, fifty four seconds to be exact, Spencer Watson picked up his second goal of the game as he circled up and down the wing in the Barrie zone before dancing his way in front of the Colts net and he picked the top corner once again giving Missy their first lead of the game.

Barrie wasn’t able to get much going in the third but did create an opportunity as Jason Willms forced a turnover in the Mississauga zone and took a backhander on goal but that was stopped by Ingham to keep the lead for the Steelheads.

Less than two minutes to go it seemed like Barrie wasn’t going to be able to tie it up but they did. Anthony Stefano took the pass in front from Roy Radke for his second of the game and 13th of the year tied the game at two’s and sending this one to overtime.