Gens Stomp on the Colts 4-1 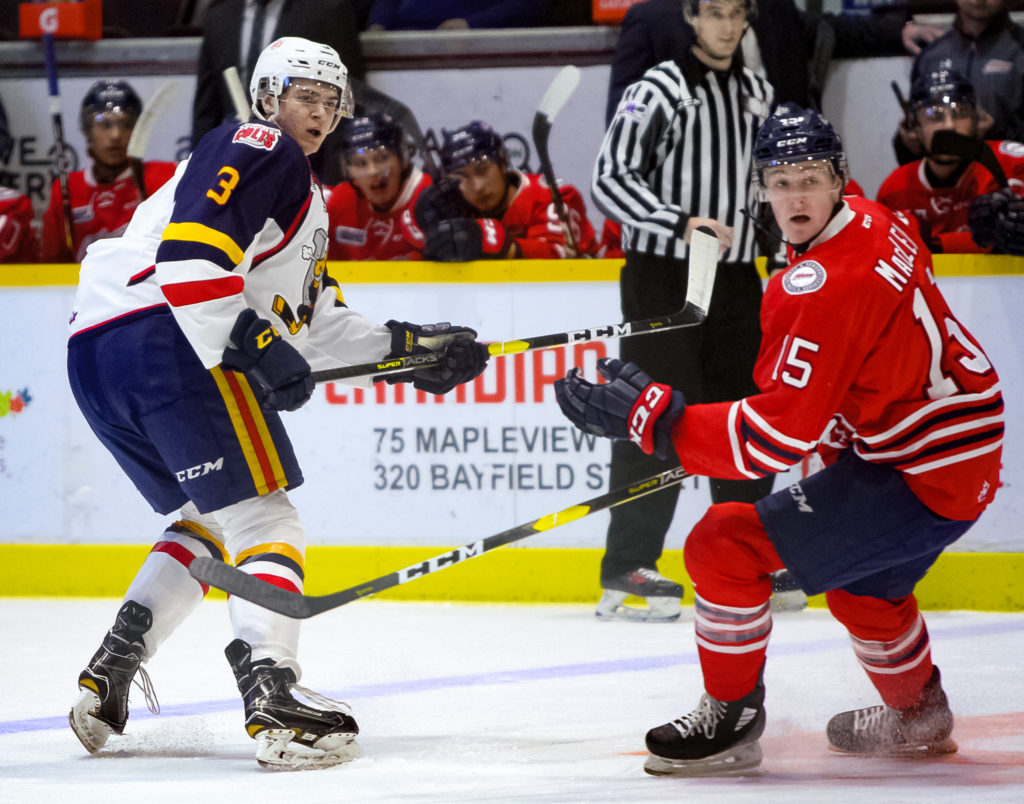 The Oshawa Generals marched into the Barrie Molson Centre Thursday night and secured a 4-1 victory over the Barrie Colts.

Jacob Tortora would score the lone goal for the Colts, netting his 7th goal of the season.

The puck drop marked the start of this redemption game for the Barrie Colts as they faced the Oshawa Generals.  The last time the two teams faced off against each other in November, Oshawa took home the win with a crushing 4-0 score over the Colts.

Both teams were coming off previous game losses and were hungry for the win.  Less than two minutes into the game, Oshawa opened up the scoring with a goal by Anthony Salinitri, assisted by Alan McShane and Giovani Vallati, that bounced off an unlucky Barrie defenceman and slipped past Edmonds.

Just under eight minutes remaining in the first period, the Colts would once again find the play caught in their end.  Oshawa forward Tyler Tullio slipped one past Edmonds, giving the Generals a 2-0 lead on the Colts.

The intensity and frustration between both teams was mounting as minor penalties were dished out to both teams.  By the end of the first period it was clear that the Colts were not horsing around.  The weather outside was frightful, but the heat of the game was enough to keep fans in the BMC warm.

The Colts were awarded their second powerplay six minutes into the second, and the boys took advantage.  Jacob Tortora cut Oshawa’s lead in half with a satisfying goal on Kyle Keyser, assisted by Ryan Suzuki and Lucas Chiodo.

The second was a period of powerplays for the Barrie Colts and they didn’t let it go to waste.  The boys creeped up behind the Generals’ 18 shots on net with 17 by the end.  Oshawa was beginning to feel the pressure with the Colts galloping on their heels going into the third period.

Unfortunately, the Barrie Colts saw a rough start to the third with Oshawa forward Kyle MacLean banging out a rebound goal on Edmonds for the Generals.  With less than five minutes left in the third period, it didn’t seem like the boys could get around Oshawa’s solid defence.

The Generals would seal the deal with two minutes left in third period, scoring on an defence-less net and securing their win over the Colts with a final score of 4-1.

The boys are now taking to the road this weekend to face off against the Sudbury Wolves Friday night, and the Sault Ste. Marie Greyhounds on Sunday.  Let’s hope our Barrie Colts have these teams howling in defeat by the end of the weekend.

Don’t forget to mark your calendars for Monte Carlo Inns Teddy Bear Toss on Thursday, December 13that the Barrie Molson Centre.  Be sure to bring your Teddy Bears or stuffed toys and send them flying to the ice when the Barrie Colts score their first goal of the game!