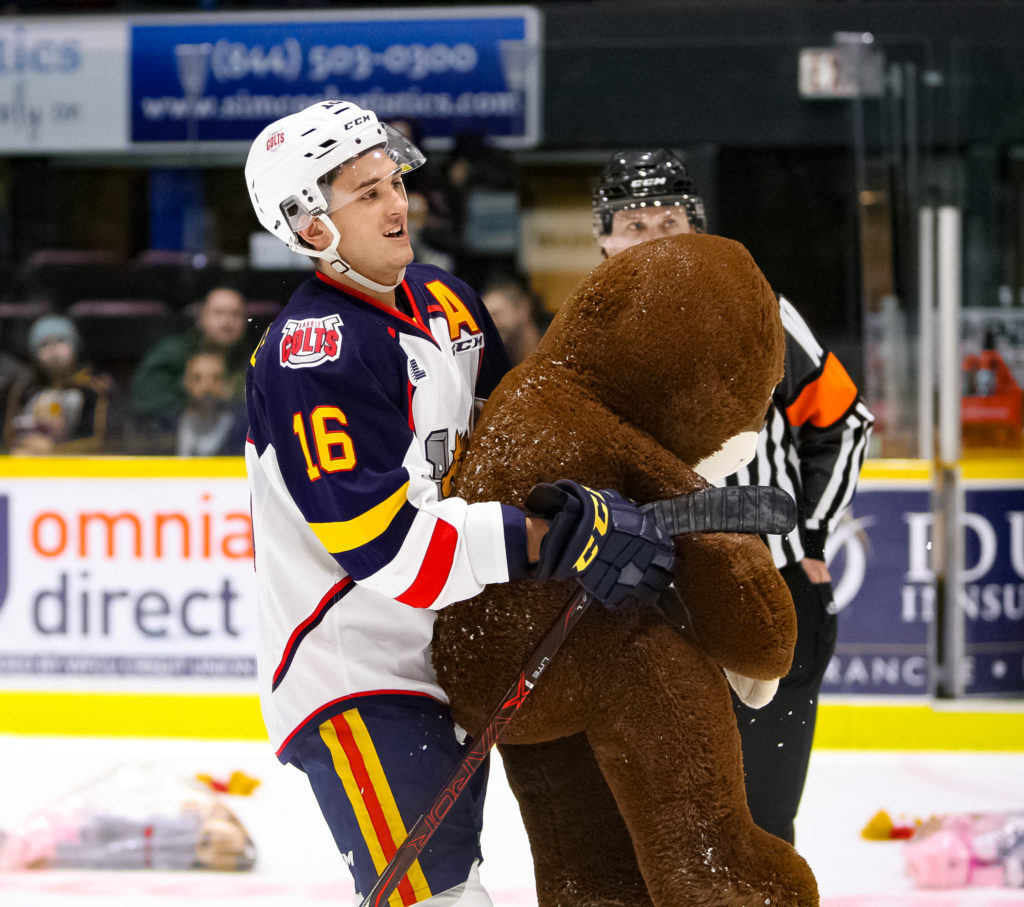 2018 OHL 1st overall selection Quinton Byfield would once again prove his prowess with a four point night to lead the  Sudbury Wolves to a 6-3 victory over the Barrie Colts Thursday night at the Barrie Molson Centre.

After the Colts took a 2-1 lead early into the second period, the Wolves would strike back quickly with a four goal frame that would prove to be the difference and never look back.

The Colts who were kicking off another three game weekend were coming in looking for redemption. After the Central Division leading Wolves handed them a convincing 5-1 loss last Friday night the two would go at it again for the fifth time already on the season.

Byfield would break open the scoring in this one nearing the 8 minute mark of the 1st. Kai Edmonds in his 13th start, would stop the initial save on the point shot, but Byfield would bury the loose puck to make it 1-0.

This was also the Colts annual Monte Carlo Inn Teddy Bear toss night and with just over a minute remaining in the 1st period the bears would fly. While on the powerplay Ryan Suzuki would hit the tape of Jake Tortora streaking through the slot for his 8th of the season. Jason Willms would also assist on the tying marker.

The Colts would get off to a great start in the second putting the Wolves back on their heels to gain their first lead of the game.

While circling the zone Willms would let a snap shot go on Ukko-Pekka Luukkenon, the first save made, but Matthew Hill would be right on the doorstep to bang in his 2nd of year.

That momentum would be short lived though as the Wolves would pounce all over the Colts, the costly errors would begin to add up as Sudbury struck for four straight unanswered.

The Wolves would respond on the powerplay as Peter Stratis wristed a shot over the glove of Edmonds.

Then Blake Murray, Byfield, and Ryan O’Bonsawin would follow him up all adding to the attrition in a span of seven minutes to go up 5-2 before the Colts could escape to the intermission.

The Colts would need a big third period to get back in this one and just over the four minute mark of the final frame Willms would continue his strong play to get one back.

Willms would get the pass out front from Jaden Peca to one time his 8th of the season past Luukkonen.

The Wolves would be quick to restore the three goal lead, with 11:15 to go in the third Owen Robinson would squeak one over the goal line to make the final 6-3.

Barrie now has a day off before a home and home matchup with the North Bay Battalion starting Saturday night as the puck will drop at the Molson Centre for a 7:30pm contest.