Foerster’s Two Goals Lifts the Colts Over the IceDogs 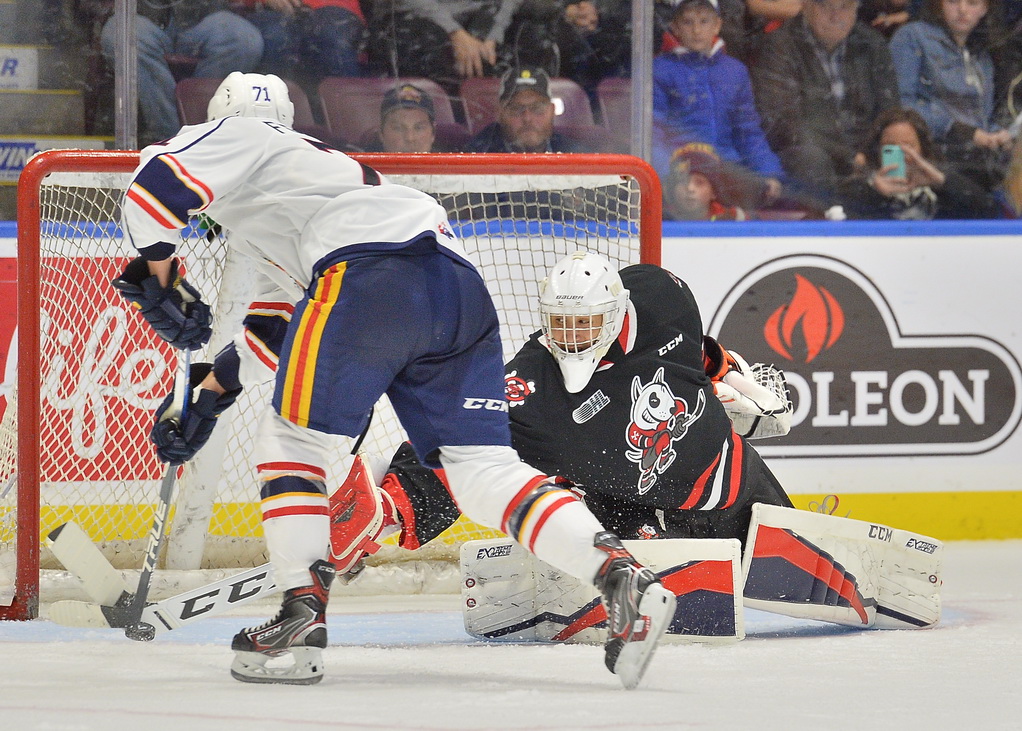 The Barrie Colts made it two for two on the weekend as they once again escaped a third period rally by the visitors skating to a 4-3 win over the Niagara IceDogs Saturday night.

In what was a dominating two periods by the Colts looking like they were easily skating to victory, the IceDogs clawed back with three unanswered goals to stun the Barrie faithful. But as the Colts got their momentum back, Foerster would save the day to earn the game winner on a late penalty shot taking the victory.

Foerster’s 10th and 11th goals of the season would see him already eclipse his goal total from a year ago and increase his point streak to 6 games for the 2020 NHL draft eligible forward.

Arturs Silovs would pick up his 5th win making back to back starts, turning aside 29 shots.

Coming off a successful start to the weekend with a nail biter win over the Owen Sound Attack Thursday night the Colts welcomed the IceDogs for the first time this season in their six game season series.

Barrie would once again strike first in the game. A deflected shot from the point would bounce right to the bottom right circle for Ryan Suzuki to quickly fire into the back of the net. Tyler Tucker and Matej Pekar would assist on Suzuki’s 3rd of the year.

With just under three minutes to play in the opening period the Icedogs would get called for a four minute check from behind penalty opening the door for the Colts to extend the lead, but that would carry into the intermission as the horn would sound with the Colts still up 1-0.

Silovs continued his stellar play throughout the first twenty minutes stopping all 14 shots as the Colts led on the shot clock as well 15-14.

At 6:19 of the second, the Colts added insurance to the lead. Tucker would let the shot fly from the point, but again a deflection in front would go right to another Barrie player, this time Foerster would snap it by Tuckerv Tynan for his 10th of the season. Suzuki would pickup his 2nd point of the night with an assist on the play.

Just two minutes later it looked as if the Icedogs had gotten a lucky bounce of their own to respond back, but the play would be called back offside keeping the lead at two.

Barrie would keep the pressure going and with just a minute passed the halfway mark of the period, Matthew Hill would blast his 1st of the year through a maze of players to make it 3-0.

Through a dominant first two periods the shots read 32-20 in favour of the Colts as Barrie outshot Niagara 17-6 in the middle frame.

But all would change nearing the midway point of the final frame. Silovs would get caught playing interference on a Niagara forward and put the boys shorthanded. The Icedogs Captain, Akil Thomas would make him pay breaking the shutout while on the powerplay to get Niagara on the board and make it 3-1.

Four minutes later the Dogs would bite back and in a span of 40 seconds even the game up at three. First Thomas would find Ivan Lodnia with a cross ice one timer to sneak by Silovs, then Phillip Tomasino would break through the Colts defense and slip one by making it a 3-3 game.

With Barrie turning the momentum back to the other end, the mounting pressure would lead to a breakaway for Foerster with just over two minutes remaining. He’d get hooked on the play and the referee would point to centre ice as a penalty shot would be awarded.

Making a couple fakes and eventually deking to the backhand, Foerster slid the puck over the goal line as Tynan’s stick would only get a piece of it, and the Colts would be back on top 4-3.

The IceDogs would pull Tynan in late stages to try for the equalizer but Barrie would hold them off and take the win.

Barrie finished the night throwing 52 shots on Tynan to Niagara’s 32.

The Colts will now hit the road for a trio of games next weekend with stops in Hamilton, Saginaw and Flint beginning Wednesday morning with a 10:30am school day game vs the Bulldogs.

Tickets for all upcoming Barrie Colts home games can be purchased online, by calling 1-888-655-9090, or in person at the Colts Store located inside the BMC.