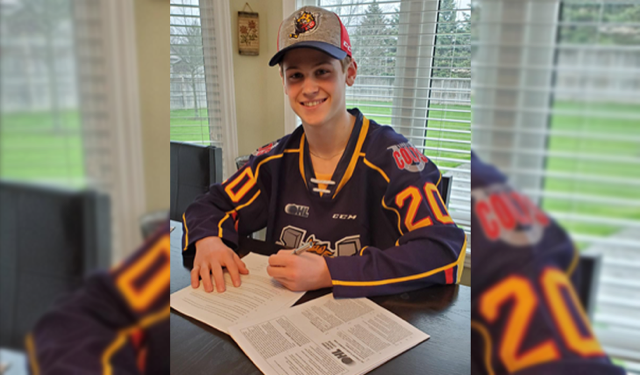 BARRIE, Ont. – The Barrie Colts are pleased to announce the club has signed centreman Hunter Haight to an Ontario Hockey League standard player agreement. The Colts selected the 2004-born Haight in the first round, ninth overall in the 2020 Ontario Hockey League Priority Selection earlier this month.
“The Barrie Colts are excited to welcome Hunter to the organization,” said Head Scout and General Manager Jason Ford. “We were extremely pleased to select Hunter at ninth overall and we are excited to see him suit up in a Colts uniform next season.”
“I’m very honoured and excited to become a Colt,” Haight said. “It has been a dream of mine to play in the OHL for as long as I can remember. Being able to start this journey with such an amazing organization like the Colts is a dream come true. I can’t wait to call Barrie home and bring my speed, skill and playmaking abilities to the team.”
Haight spent the 2019-20 season with the Minor Hockey Alliance of Ontario’s Elgin-Middlesex Chiefs where the 5’9”, 145 lbs centreman posted an impressive 32 goals and 26 assists for 58 points in 33 regular season games. The Strathroy, Ont. native followed up his strong regular season with 11 goals and 15 assists in 16 playoff games on the way to an Alliance championship. Haight was also an alternate captain for the Chiefs last season.
“He has excellent speed including a few different gears through the neutral zone and can really push defenders back on their heels,” Ford said. “He has very good hockey sense and can make plays at high speeds. Hunter is a well-rounded hockey player with the ability to finish. He competes at both ends of the ice and is a character kid.”
Haight will attend Innisdale Secondary School in Barrie when he joins the Colts.
Keep up with all the latest news in #ColtsCountry on the team’s Facebook, Twitter, Instagram and at BarrieColts.com.