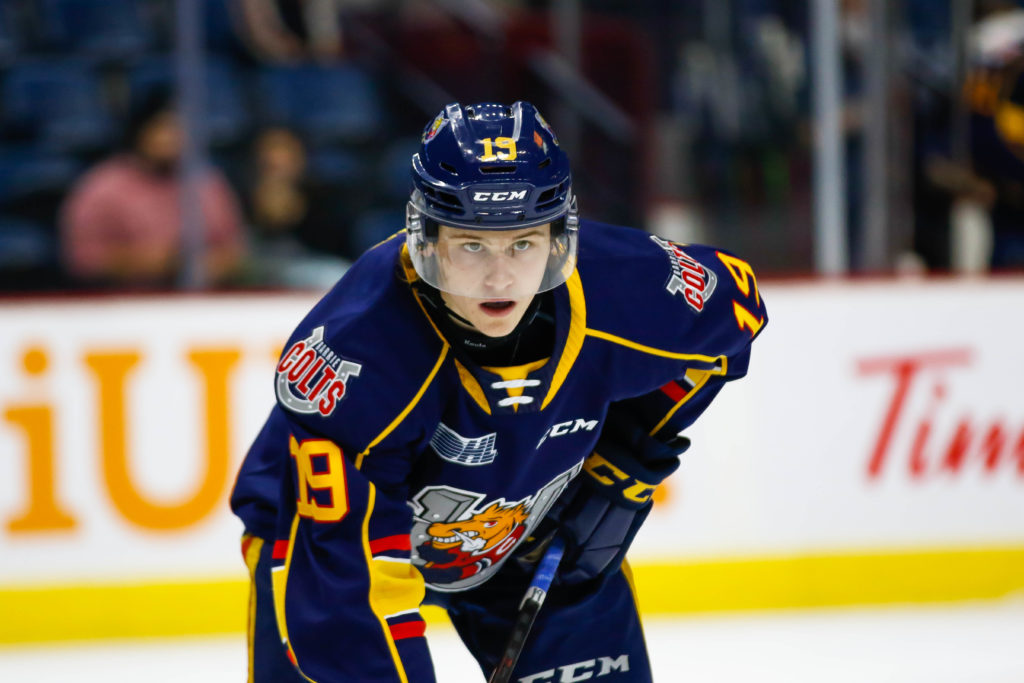 The Haight family is one of natural leaders. Hunter is no exception.

Growing up in Strathroy, Ontario – a rural town just a stone’s throw away from London – Hunter was similar, in a way, to many kids his age. Partaking in a wide range of sports, he eventually settled on hockey, and spent the majority of his childhood within the Elgin Middlesex Chiefs organization, one of the many elite AAA hockey programs in the province.

What set Hunter apart, however, was his unwavering ability to lead by example. Something that he gives his family a lot of credit for.

Hunter’s dad, Steve, is an Ontario Provincial Police officer, having led the tactical rescue team out of London for seven years before running the police detachment in Middlesex county.

“My dad has been a huge part of my development, both as a person and as a player. I will always be thankful for that,” Hunter says confidently. “He showed me the ropes, how to be a good teammate and a leader.”

Hunter’s brother, Griffin, is just beginning his basic training within the Canadian military.

“I have a great relationship with my brother, you don’t see us fighting much anymore compared to when we were kids,” he says with a laugh. “He’s someone I’ve always looked up to and he’s probably the nicest human being you’ll meet.”

Hunter’s mom, Amy, while not necessarily holding any prominent positions of leadership, still played an integral role in shaping Hunter into the person he’s become today.

“I’ll always give props to my mom,” he says with a smile, perhaps reflecting on just how impactful his family has been on him. “She’s huge in terms of who I am as a person.”

With a unique cast of role models surrounding him, it’s not surprising to see that Hunter has taken the leadership qualities he saw growing up and applied them to his hockey career. In fact, he attributes his childhood experiences as one of the main influences behind how he sees himself today.

“Growing up around policing, my dad taught me all the things about his job,” he recalls. “Being older now, he’s been able to tell me more about those things, and I’ve learned a lot about the military from my brother.”

He further emphasized that being able to see his dad’s job, from a more personal perspective, impacted his view on what he wanted to accomplish in life.

“Growing up around it, I’d go to the station all the time. I got to see the vehicles, the bomb robot, things like that. I loved that stuff,” he continues. “If I wasn’t a hockey player, I would most likely find myself in the military or policing fields for sure.”

Those experiences, one where a kid gets to see armoured vehicles up close or visit a police station on a regular basis, are experiences that shape you into the person you eventually become. For Hunter, this was no different, as the lives of his family members intertwined with his. And he loved it.

“For my dad and my brother, both being role models for me, they’ve really helped me become the person I am today and the player I want to be.”

As much as he had a natural passion for policing, Hunter also found himself fully immersed in sports ever since he was a kid. Playing soccer and baseball in the summer months while partaking in hockey during the winter season provided him with another avenue to pursue, one that would offer new perspectives and opportunities.

Like many Canadian kids, there was something about hockey that stood out. Being able to focus exclusively on one sport for half the year seemed to make all the difference for Hunter. It ignited a passion within him, and, as Hunter puts it, he was hooked.

With a new passion taking him to new heights, his family was never far behind, always lending a hand and taking a proactive approach to his hockey career. In fact, Hunter credits his family for not only getting him this far in his hockey career, but also teaching him the fundamentals to find success at the higher levels of the sport.

“My dad, being my first coach, taught me that defense is really important. He always told me that good defense will always lead to offensive opportunities, and that’s something I took to heart,” Hunter remembers. “Playing a 200-foot game is huge, especially as a centerman, and it’s definitely helped me get to the next level.”

Priding himself on his versatility, it’s Hunter’s ability to play in a wide range of situations that has continued to bring him success as he’s graduated through the higher levels of hockey. “You need to fit into certain roles,” he explains, thinking back to how he’s been able to elevate his game in all areas of the ice. “Being versatile, it’s more tools in the toolbox that you can use to your advantage. You’ll be able to fit into different systems and it gives you the best ability to be successful.”

On top of the on-ice knowledge that his dad brought to the table, Hunter was quick to credit how impactful he continues to be off the ice.

“My dad is a phenomenal leader, a great speaker and he knows how to motivate people. He’s also compassionate, though, and he understands who he’s working with,” he says as he continues to describe his dad’s career path. “For me, I think those characteristics have transitioned into my character. I have to understand how to build relationships when it comes to teammates.”

While not necessarily being the most vocal in the locker room, Hunter still sees his own leadership qualities as an important asset to his game, often “leading by example” as opposed to speaking and bringing a positive mindset to the rink.

Hunter Haight (@Haight_Hunter) finds the back of the net for his 7th of the season, as the @OHLBarrieColts lead 6-2 heading into the third period 📽️ pic.twitter.com/1ksJld6rZ2

Drafted ninth overall by the Colts in 2020, Hunter was one of many players that were hindered by the impacts of the current pandemic.

“When you get drafted into the OHL, that’s the year that guys come in at 16 and they find where they’re at in terms of the pacing. They get comfortable that year and meet all the guys,” he explains thinking back to the uncertainty that surrounded 2020. “This year, being the draft year, this is the year where you’ve solidified yourself on the team and develop from there so that in itself has been a challenge to overcome.”

A challenge would be an understatement.

During the initial height of the pandemic, Hunter found himself at home back in London, forced into using whatever resources he could in order to not fall behind.

“I found myself in my basement a lot, my dad set up a gym down there and a little shooting room. I was either there or in school, right after class I’d go down there,” he says. “I was lucky enough to have facilities in London open to me, including a rink where I could skate and still work on skills. So even though I wasn’t playing games that year, I still had a chance to develop.”

Eventually, that development would pay off in a big way. During the summer of 2021, Hunter was invited to Hockey Canada’s U18 Summer Showcase, an annual training camp held on the national stage that features some of the best young talent that the sport has to offer.

“The U18 showcase, it was unbelievable. Hockey Canada is top notch and it’s an amazing program,” he recalls, reflecting fondly on his time wearing the maple leaf. “Being invited was an awesome experience for me, I haven’t really been on many planes so I got to experience that, but just the professionalism and how much pride and care they put into development, it was just an unforgettable experience.”

What made his first Hockey Canada experience even more unforgettable was the intriguing twist that the National Team decided to implement. The showcase, which divided some of the best 2004-born talent into three different teams, were soon joined by that year’s World Junior squad, complete with some prominent names who are currently making an impact at the NHL, AHL and CHL level.

One of those names happened to be Hunter’s future teammate, none other than Los Angeles Kings prospect Brandt Clarke.

“I think the first time I saw Brandt was at the hotel, they had just gotten there,” Hunter recalls with a smile. “We said hi, we didn’t really know each other at that point but it was fun to play with him. I was just glad we were on the same team for that World Junior mix.”

Having been training on his own for the large part of the 2020 season, Hunter’s Hockey Canada experience couldn’t have come at a better time. Getting to meet and play with a future teammate is one thing, but as Hunter recalls, he was surrounded by superstars everywhere he looked.

“I was on a line with Luke Evangelista and Cole Sillinger. I had power play opportunities and played with guys like Brandt and Olen Zellweger so it was just really cool.”

Seeing where those players are today continues to make Hunter’s U18 experience all the more unique. Luke Evangelista, a 2nd round pick to the Nashville Predators back in 2020, is currently serving as the captain of the London Knights.

Cole Sillinger, after being drafted 12th overall by the Columbus Blue Jackets in 2021, is currently still with the team.

Olen Zellweger is dominating the Western Hockey League with the Everett Silvertips and Brandt Clarke is, of course, wearing the ‘C’ in Barrie.

Now back in Barrie with Brandt and fully immersed in his first full season with the Colts, Hunter continues to focus on the road ahead. He knows that he’s lost a year of playing competitively, but he hasn’t let that influence his work ethic or attitude, especially with so much on the line.

With the 2021 season being his draft year, Hunter’s name has jumped up and down various boards and rankings all year long. And while he admits that it can be distracting, he’s made it a priority to drown out the noise.

“It’s nice to hear that you’re up there on rankings and known by people,” Hunter says, acknowledging the added pressure that comes with the draft being less than six months away. “But I think the most important thing is to finish the season strong and develop my game further. If I do that and stick to getting better every single day, you’re going to develop as a player and you’re going to get talked about even more.”

At the end of the day, Hunter sees the NHL Draft as an opportunity for not only him, but his family as well. A testament to the lessons taught, the experiences lived, and the sacrifices they’ve all had to make in order for him to be where he is today.

“The draft is what I’ve been working towards, with everything my parents and my brother have done for me,” he says. “It would mean the world to me, it’s my goal in life to play professionally, and hearing my name called on that day would be pretty special for my family.”