Edmonds shuts out the Frontenacs 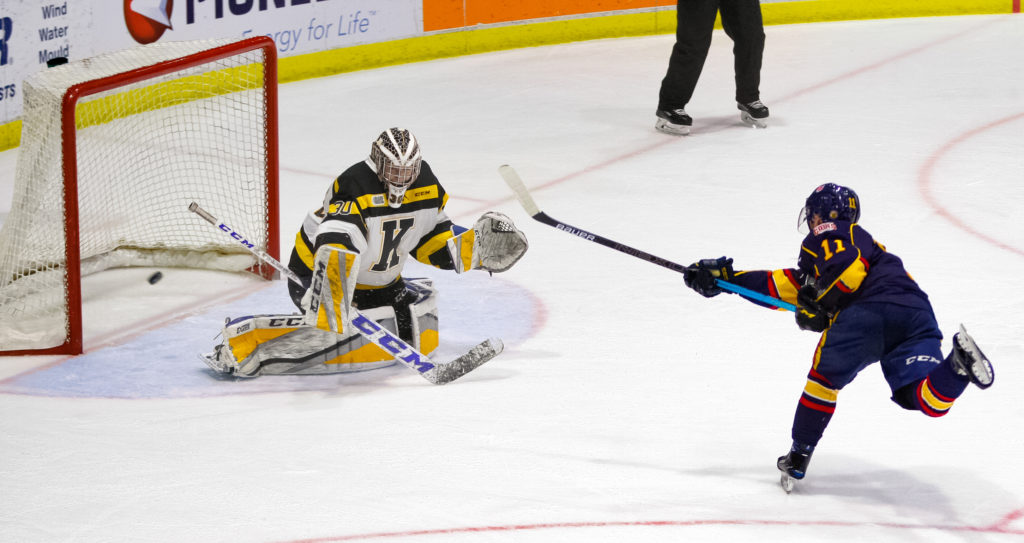 Coming off back to back one goal losses earlier in the weekend the Colts battled back to finish out the weekend on a high note.

In an impressive display in the Colts net, Kai Edmonds earned his 1st shutout of the year and 8th win turning aside all 35 shots in a 4-0 victory. Luke Bignell, Dalton Duhart, Jacob Tortora and Aidan Brown would all find the back of the net as the boys would get back in the win column over the Eastern Conference’s last place Kingston Frontenacs.

Being the Colts third game in three nights the Colts continued to get stronger as the weekend went on and with a solid first period the Colts never left off the pedal.

With both teams taking turns in the penalty box in the early going of the period, Barrie would capitalize on their second powerplay opportunity of the night.

Bignell on the doorstep would snag the rebound and put his 8th of the year past Marshall Frappier at 13:13 of the first. Assists going to Jack York and Duhart.

The boys would keep the pressure on, and just like the first goal a shot coming from the point would double up the lead. Just two minutes later, Duhart would put Matthew Hill’s initial attempt home for his 10th.

After the opening twenty minutes the Colts were up 2-0 and lead on the shot clock 12-9.

An eventful second would see the Colts come out with plenty of fire in them. With Matthew Hill getting things going first with a scrap and Nathan Allensen, playing in his 100th career OHL game dropping the gloves later, the Colts controlled the play.

Holding down their lead midway through the period Jacob Tortora would be issued a penalty shot after getting tripped up on a breakaway. The speedy Colts forward would make no mistake converting for his 12th of the season past Frappier.

The action wasn’t only at the opposing end. Kingston would end up outshooting the Colts in the second but remain down by three thanks in large part to the dazzling effort of Edmonds including a huge stretched out pad save with three minutes to go in frame.

In the third, Barrie would continue to hold the fort, but come within mere inches of giving up Kingston’s first goal. Edmonds would make the save coming off the left wing, but the puck trickled loose across the goal line before Tyson Foerster would knock it aside to keep them scoreless.

Aidan Brown capped the night off for the Colts and added another before the period was out for his 8th. Chris Cameron and Jason Willms would collect the assists as the Colts skated to the 4-0 final.