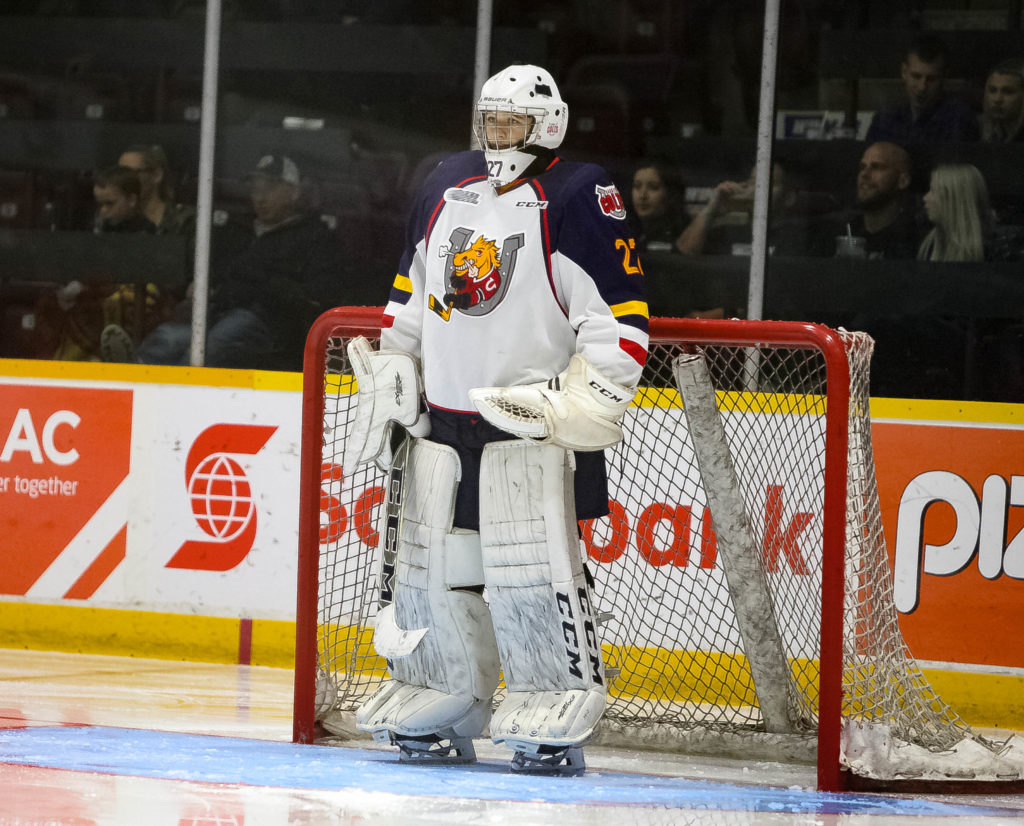 A power outage in the Hershey Centre, swung momentum to the visiting side as the Barrie Colts struck late in the game to earn a 3-2 victory Friday night.

After about a five-minute delay that saw all the power in the building go out, Barrie was able to steal the momentum from the Mississauga Steelheads and score quickly. Right off the faceoff in the Barrie zone, Zach Magwood would take a breakaway but miss the net. The puck would bounce out to Jason Willms who had it bounce off his body and into the net for the game winning goal and his 15th of the season.

Friday night presented a Central division battle between the Mississauga Steelheads and the Barrie Colts. Both teams came in riding losing streaks. Barrie came in dropping their last two games of the weekend last week, while the fish were losers of their past seven contests.

The scoring would get started a little less than five minutes into the opening period. Ben Hawerchuk would skate the puck into the Steelheads zone before dropping it to Justin Murray who didn’t get all of the shot, but it was enough to bear Jacob Ingham to put the boys in blue on the board. Magwood would tally the second assist.

Not long after, it was the Colts striking again. This time it was Magwood using his elite speed to fly down the wing before sniping home his 15th goal of the season overt he glove hand of Ingham. Hawerchuk and T.J. Fergus would grab the assists on the insurance marker.

It wasn’t until a Barrie penalty before the fish could find a scoring chance, and with that would capitalize to get on the board. It was Owen Tippet moving it into the Barrie zone before feeding a streaking Michael Mcleod who’d angle himself to the front of the net and sliding the puck between the legs of Kai Edmonds who got his third start of the season.

The second period would start a little bit quieter when it came to goals being scored, but it didn’t mean the scoring chances weren’t there. Mostly for the Steelheads though, forcing the Colts rookie net-minder to come up with big stops multiple times early in the frame to keep Barrie in the lead.

Barrie would eventually get a quality scoring chance midway through the second. It was Barrie’s first overall pick in the 2017 OHL Import draft Andrei Svechnikov playing in his first game in two months who sent Lucas Chiodo on a break but he was stopped by the blocker hand of Ingham to keep the game at 2-1 Colts.

As the period was ticking away Edmonds was forced to come up big a number of times once again as the fish started throwing everything towards the Barrie goal. The 17 year old made 24 saves through the first forty minutes of play.

Just like they did in the first period, the Steelheads took advantage of a powerplay and did it quickly. A shot from the point by Thomas Harley that got through a screen and past a screened Edmonds to tie the game at two.

After Barrie was able to grab the lead, the fish couldn’t find another way to beat the Colts’ Edmonds who picked up his second win of the season as the Steelheads drop their 8th straight game. Edmonds made 29 saves in the victory.

Barrie is back in action tomorrow afternoon on Sportsnet as they play host to the Oshawa Generals at 3:45pm. Tickets still available at www.barriecolts.com. The Colts will wrap up the weekend with a trip to North Bay to take on another Central Division opponent.