Dellandrea and Silovs named to Vaughn CHL Team of the Week for Jan. 20-26 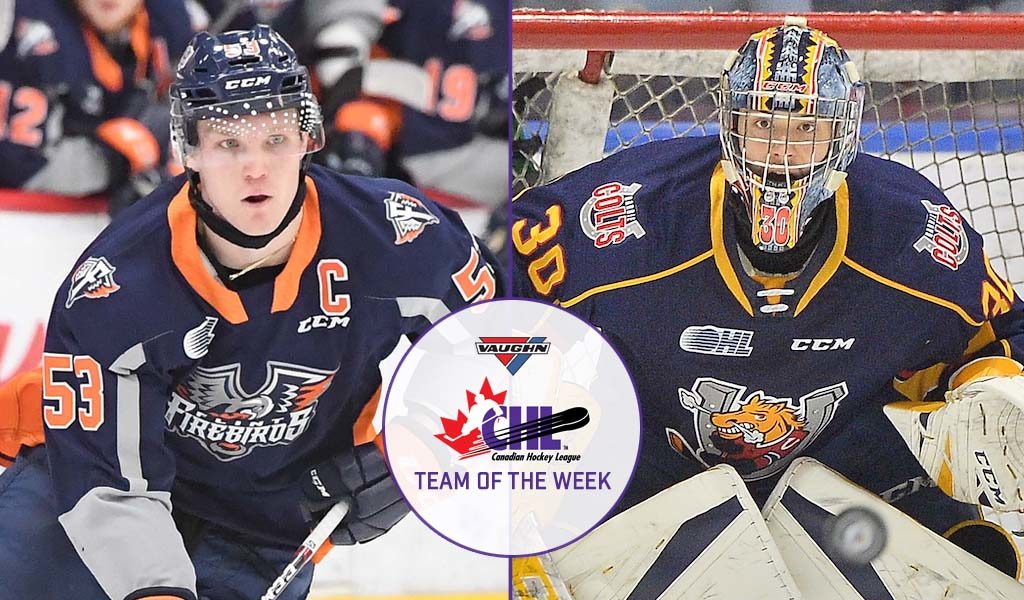 The Canadian Hockey League today announced the 18th edition of the Vaughn CHL Team of the Week for the 2019-20 season based on individual performances from Jan. 20-26.

Leading the way is Flint Firebirds captain and Dallas Stars first-round pick Ty Dellandrea who wrapped up the week with 10 points counting six goals and four assists over three games. Dellandrea began the week on a high note putting up two goals and two assists for four points in Wednesday’s 7-4 road win over the Soo Greyhounds in which he also claimed second-star honours. For his efforts, Dellandrea was recognized as the OHL ‘On the Run’ Player of the Week.

Also up front is Portland Winterhawks centre and 2020 NHL Draft prospect Seth Jarvis who recorded four goals and five assists for nine points over a pair of appearances. Against the Tri-City Americans on Friday, Jarvis matched a season-high of five points as he finished with two goals and three assists to help his club to an 8-2 victory in which he was also recognized as the game’s first star. Given his successful showing, Jarvis was honoured as the WHL ‘On the Run’ Player of the Week.

Rounding out the forward ranks is Sherbrooke Phoenix captain and Pittsburgh Penguins first-round pick Samuel Poulin who registered eight points counting five goals and three assists over a pair of contests. Poulin’s best showing came against the Acadie-Bathurst Titan on Friday as he put up five points and tied a franchise-record with four goals while adding one assist to help claim a 10-1 victory and first-star honours. For his efforts, Poulin was recognized as the Ultramar QMJHL Player of the Week.

Leading the blue line is Lethbridge Hurricanes defenceman and Penguins prospect Calen Addison who impressed with nine assists over a trio of appearances. Addison’s top showing came against the Regina Pats on Friday as he finished with a season-high of five points – all coming as helpers – en route to a 7-2 road victory and first-star recognition.

Partnering on the back end is Addison’s teammate in Hurricanes blue liner Alex Cotton who wrapped up the week with two goals and five assists for seven points over three games. The stretch included back-to-back three-point efforts versus the Moose Jaw Warriors and Regina Pats with the former counting a trio of assists in a 7-1 road victory in which Cotton was recognized as the game’s third star.

Between the pipes, Barrie Colts netminder and Vancouver Canucks draft pick Arturs Silovs shined over a pair of appearances and 123 minutes of ice time in which he came away with a pair of victories. Against the Oshawa Generals on Thursday, Silovs turned aside 19 shots en route to a 5-0 victory and his first career shutout to earn second-star honours. In all, Silovs wrapped up the week with a miniscule 0.98 goals-against average coupled with an outstanding .964 save percentage. 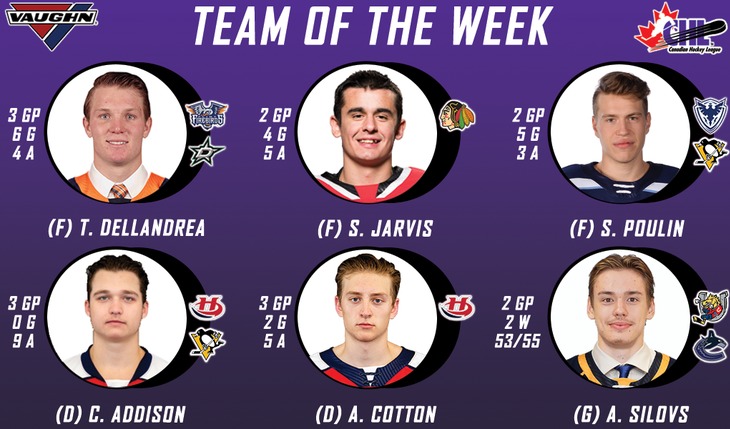