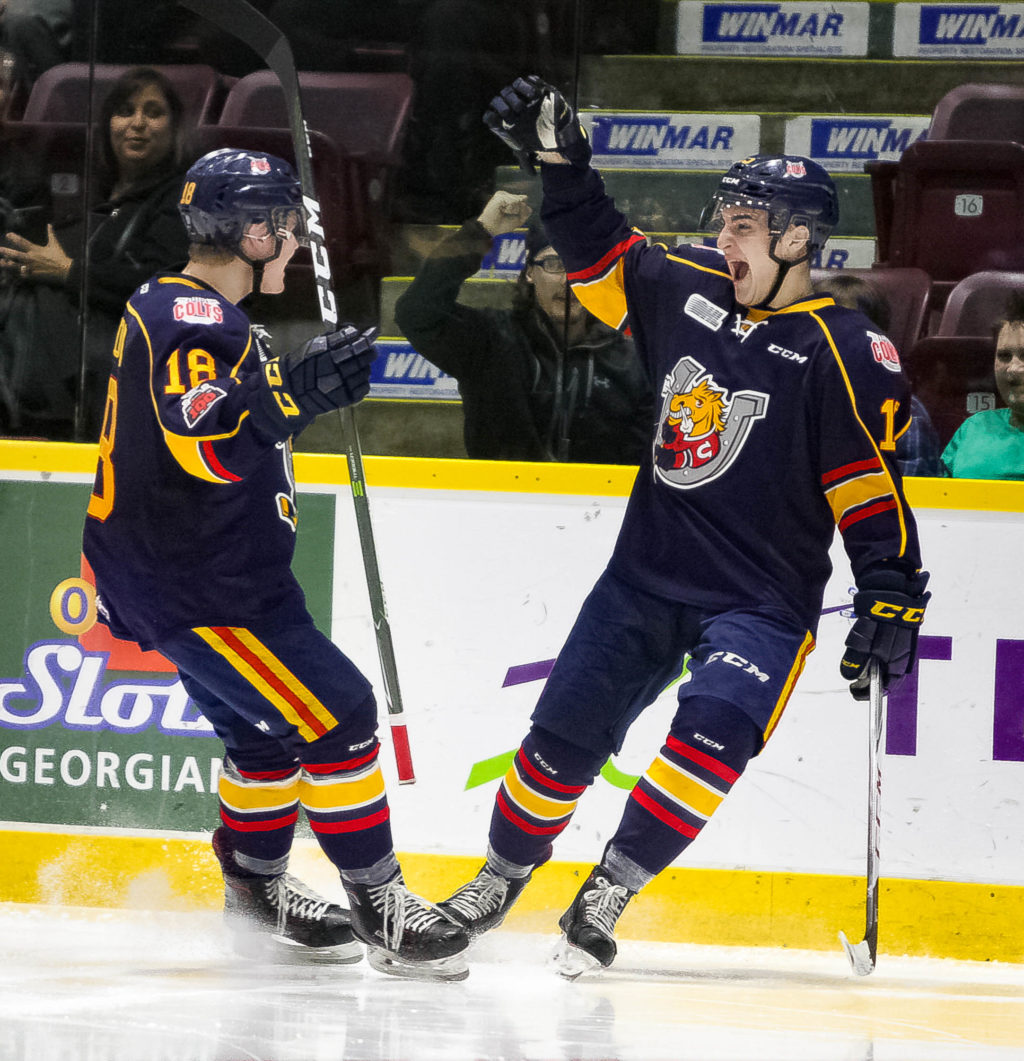 A wild 60 minutes were played in Flint on Wednesday night with the two teams combining for thirteen goals in Barrie’s 8-5 victory.

Despite missing Andrei Svechnikov at the Five Nations Tournament, Barrie showed no signs of a lack of offence on this evening.

On February 14th, a day signified with love it was a battle between two out of conference enemies the Barrie Colts and Flint Firebirds that were up against one another for the second straight game in a matter of four days. There would definitely be no love lost for these two foes.

It was the home team that would open the scoring. It was a Firebirds forward attempting a wrap around attempt on the Barrie goal, he wasn’t able to execute it and it sent the puck out to the slot right onto the stick of Jake Wismer who powered it home past Leo Lazarev.

Nearing the end of the period it was Flint striking again. Off a point shot a big rebound came back to the opposite side of the ice at the blueline for Fedor Gordeev who pulled a little toe drag around a Colts defender before snapping it home for the 2-0 Firebirds lead.

The second period would be much more generous to the Barrie Colts as they would finally get the offense going. First it was a goal that literally trickled across the line. Ben Hawerchuk was set up with a gaping cage by Zach Magwood, Hawerchuk would fan on it but it was able to make its way over the goalline for his 11th of the year.

The game would be tied just forty four seconds later. It was a strong defensive effort by Aaron Luchuk as he stripped a defender of the puck before getting back to his feet and sliding one across the ice for Lucas Chiodo for him to bang home his 20th goal of the season. With his 20th goal he becomes the 6th Barrie Colt to hit the mark this year.

The scoring wouldn’t stop. Just past the midway point of the period it was an unlikely goal scorer Tyler Tucker giving Barrie their first lead of the game. Tucker put home his 2nd of the season with a slapshot from the point that made its way past Garrett Forrest and gave Barrie the 3-2 lead.

They would not stop. More defensemen got into the scoring on another blast from the point. It was a nice little exchange by T.J. Fergus who used his body to protect the puck before leaving it for Joey Keane. He would then fake a shot to get around a defender and then fired home his 8th goal of the season to give Barrie the 4-2 lead.

Just when you thought the period would end with the Colts doubling up the Firebirds, Barrie had different plans. On a two on one, Aidan Brown fed a nice pass across for Jaden Peca who became the fifth different Colts scorer in the game as he put his 13th of the season home for the 5-2 lead.

Before the buzzer could sound though the Firebirds were able to get one back as Connor Roberts put one in with just over eight seconds to go in the period to bring the score to 5-3.

The third didn’t start the way Barrie had hoped for. A bad turnover was put right on the stick of Max Kislinger who wasted no time hammering it home to cut the lead to 5-4 Barrie.

This wild game would continue with more scoring. Once again it was Flint scoring to tie the game at 5. On a one on one C.J. Clarke would spin and fire a shot along the ice that would get between the pads of Lazarev, and the Barrie three goal lead would be gone in the matter of just over a minutes worth of gameplay spanning over two periods.

A Barrie powerplay past the halfway point of the third would prove costly for Flint. The Colts didn’t waste any time as Dmitry Sokolov put home his 35th goal of the season (4th in the last two games against Flint) to give them the 6-5 lead. The goal was set up by Luchuk, who continues to climb towards the OHL’s leading point scorer. That assist gave him 87 points on the season, leaving him one shy of the OHL leader Morgan Frost of the Sault Ste. Marie Greyhounds.

It wouldn’t take him long to tie the league in points as he would get his 88th point and 41st goal on a wrist shot with just under five minutes to go in the 3rd period. Sokolov and Chiodo tallied assists on the insurance marker.

Tucker would add an empty netter for his 2nd of the game and third of the season to give Barrie the 8-5 victory.

Barrie is back in action tomorrow night as they take on Aaron Luchuk’s former club in the Windsor Spitfires. The Colts will then head home to take on the Niagara IceDogs on home ice on Saturday evening.