Colts Win the War Against Battalion 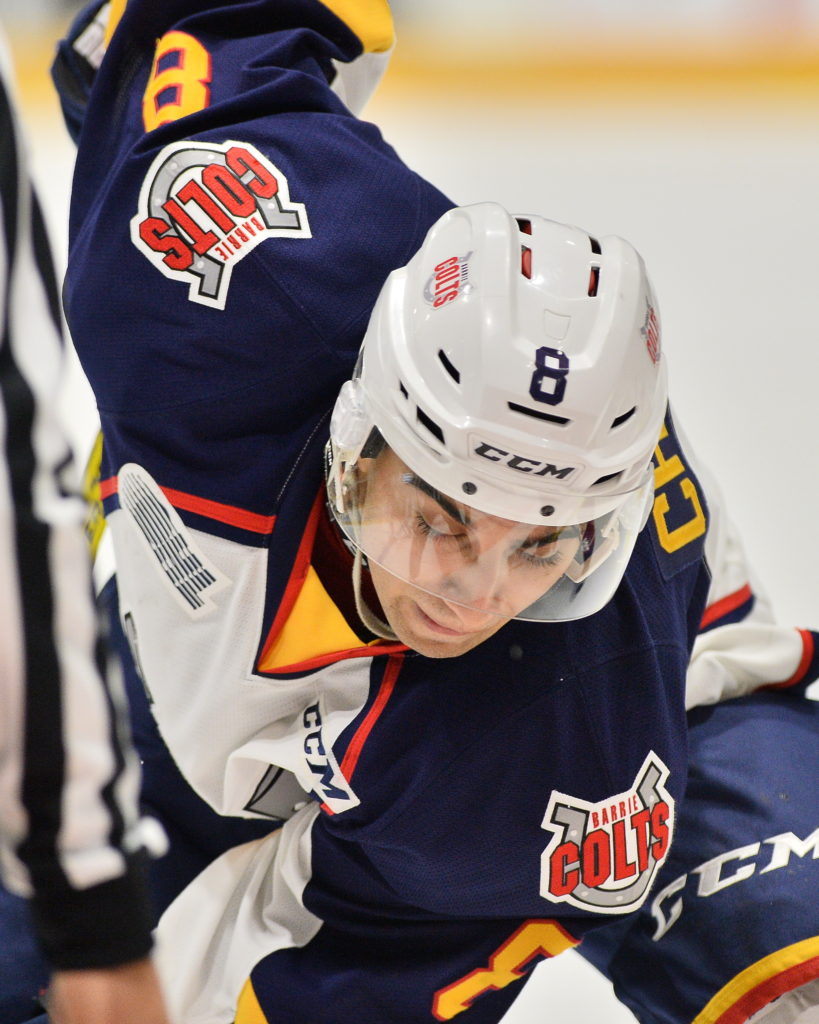 The Barrie Colts turned in a solid sixty-minute performance to bury the North Bay Batallion taking a 6-1 victory.

Lucas Chiodo would score two goals, and Anthony Stefano, Kirill Nizhnikov and Joey Keane would collect a pair of assists each.

David Ovsjannikov who had just celebrated his 20th birthday two days prior was named the game’s Third Star for his steady performance making 20 saves.

On this night, The Colts teamed up with the Canadian Mental Health Association to spread awareness of mental health issues. The awareness campaign is part of the ongoing commitment by the Colts and CMHA to implement Talk Today. The program provides mental health support to players and raises awareness about mental health and suicide prevention in Ontario Hockey League communities. A pregame ceremony would take part prior to the opening puck drop as part of the initiative.

The Colts would come out playing a strong opening period. For Barrie this was another opportunity to play spoiler against a beatable opponent and get a win of their own.

Five minutes into the first period some great hand eye coordination would get the offense going.

The Colts would break into the Batallion zone off a couple pucks batted up ice. Kirill Nizhnikov would skate the puck over the blue line and send a high shot off the glass bouncing right back out front. Giordano Finoro would bat it out of the air past Batallion starting goaltender Brent Moran for his 12th of the season.

The Colts would keep the pressure coming. Anthony Stefano would find Lucas Chiodo in the slot streaking in from the blue line; He’d rifle a shot over the glove of Moran for his 18th of the year to put the Colts up by 2. Joey Keane also assisting on the play.

Ovsjannikov making his 30th start of the season would save all 10 shots he faced to take the 2-0 lead into the intermission.

The Batallion would come out playing an aggressive style of play looking to respond in the second, but Ovsjannikov would continue to stand his ground allowing the Colts to keep the offense coming.

Midway through the second, the Colts would add another to increase their lead.

Stefano would send a beautiful saucer pass right on the tape for Chiodo to one time his second of the game short side, registering his 19th of the season.

With just under four minutes remaining in the second, the Colts would benefit from another bounce off the Molson Centre’s end boards. This time it would be Kyle Heitzner finding the loose puck beside the Battalion net, making a quick move to end Moran’s night in goal. Keane and Curtis Douglas would collect assists.

Julian Sime would come in relief for the Battalion, but wouldn’t fair much better.

With 34 seconds remaining in the second, Tom Hedberg would slide a pass over to Roy Radke skating into the zone. Radke would snipe his 15th top shelf to take a 5-0 lead into the final twenty minutes.

The third period was much of the same with the Colts dominating the play finishing with a shot total 30-21.

Jason Wilms would get his 12th goal of the year to make it 6-0 at 3:36 of the third, coming off a nice feed from Nizhnikov for his second assist on the night.

With just over three minutes remaining, North Bay’s leading scorer Brent Mackenzie would spoil the shutout bid for Ovsjannikov to end the score at 6-1.

The Colts will finish off their weekend with a Monday afternoon Family Day matinee in Kingston to battle the Frontenacs at 2pm.