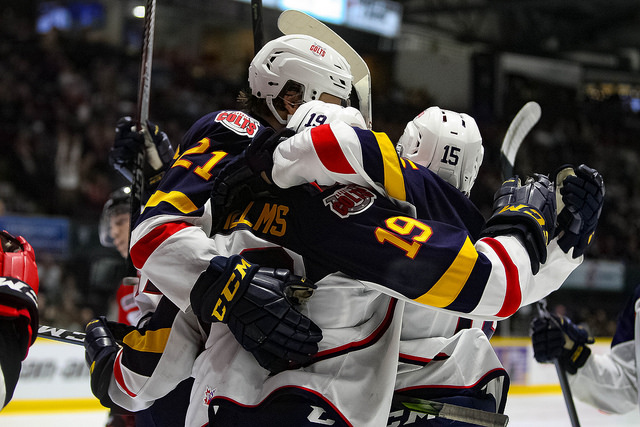 Two third period goals by Jason Willms propels the Barrie Colts to a 4-1 victory over the Sudbury Wolves on Friday night.

The game was tied heading into the third period in a penalty filled affair as the two division rivals had no love lost. At this point in the third period the Wolves were 0/8 on the powerplay. Their ninth powerplay wouldn’t get much better. Barrie would be the ones capitalizing. Zach Magwood would fight for the puck in the corner before finding Jason Willms all alone in front as he slipped it past McGrath to give Barrie their first lead of the game 2-1.

Shortly after on a two-man advantage Willms would add another to seal the victory for the boys. Alexey Lipanov would record the lone assist.

On a cool Friday evening the Barrie Colts found themselves making the trip north to take on their division rivals Sudbury Wolves for the first time this season.

Barrie came in riding a high from a 4-3 overtime victory a night ago at home against the Soo Greyhounds.

The extra period looked like it may have taken a bit of their legs in the first of this one as it was almost all Sudbury chances. Barrie was held to just four shots in the period while the Wolves put nine on Leo Lazarev who made his second consecutive start and third of the season.

The first period was full of penalties as both teams made multiple trips to the box. Sudbury generated some chances but the Colts overage net-minder was able to make the saves to keep it scoreless.

Barrie started the second period shorthanded after a penalty was called to end the first. A second after the penalty was over it was Owen Gihula forcing a bad Barrie turnover. Lazarev made the initial save, but the Wolves forward found the rebound to open the scoring.

Late in the second the Colts would finally get something going. It took a powerplay to open the scoring. A broken play resulted in the puck falling onto Lucas Chiodo’s stick, he then slid a weak backhander on Jake McGrath that he wasn’t able to save as he was falling backwards. After a brief couple of seconds went by, the officials saw the puck behind the line to tie the score at 1.

With just over a minute left in the period Ryan Suzuki was sprung on a breakaway looking to give Barrie their first lead of the game but was stopped, sending the game to the third tied at one.

Kade Landry would add the empty netter for the fourth goal of the game.

The boys are back in action tomorrow night as they wrap up a three in three with a date against the Hamilton Bulldogs back at the Molson Centre. Tickets still available for the 7:30pm puck drop.