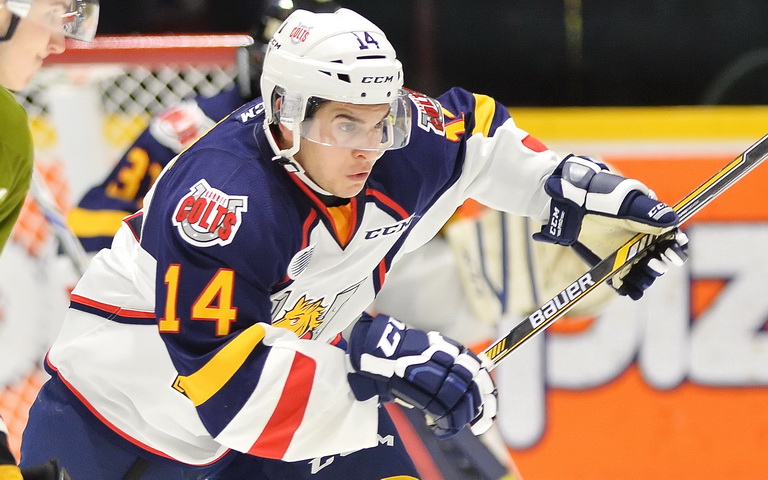 After winning Monday night at home, the Colts traveled to North Bay for Game 3 of the best-of-seven series in the Eastern Conference Semi Finals. The Colts looked to extend their series lead to 3-0 traveling into the Battalion’s home ice, knowing that in previous years it has been a battle.

Tuesday night though, the Colts would once again come out victorious, earning a 4-2 victory in North Bay to solidify a 3-0 series lead.

The Colts would get on the board first early in the opening period. After Cordell James was penalized for hooking, the Colts penalty kill, who had the most short-handed goals for in the regular season among all OHL teams with 28 goals, went to work. The Battalion were trying to keep the puck in the Colts zone, but Justin Murray intercepted the pass and fed a breaking Kevin Labanc up ice. Labanc made no mistake on the breakaway, beating Jake Smith for his 5th goal of the playoffs.

Less than five minutes later, the Colts would extend their lead to 2-0 when Michael Webster would net his first goal of the post season. Labanc initially brought the puck into the Battalion zone, before pulling up below the half circle and feeding Webster on the point. Webster went D to D with Rasmus Andersson before getting the puck back and firing a shot home through traffic.

Despite holding a 2-0 lead heading into the second period, the Colts were outshot 10-7 in the first period.

The Battalion wouldn’t back down in the second period. It would only take them 29 seconds in the middle frame to cut the Colts lead to 1. The Battalion would hem the Colts is after numerous clearing attempts, and it would be Mathew Santos who would bury the first goal for the Battalion on the wrap around. Mike Amadio and Maurizio Colella who would register the assists.

Near the midway point of the game, the Colts would regain their two-goal lead. Mackenzie Blackwood initially made a kick save in the Colts zone, allowing Cordell James to get the puck out of the Colts zone. James then fed Anthony Stefano breaking up the ice, and Stefano would drop the puck for Justin Murray. Murray made no mistake and beat Smith glove side for his first of the playoffs, making it 3-1.

The Colts wouldn’t be able to escape the second period though without giving up one more goal to the Battalion. With less than three minutes to play in the period, Mike Amadio would score his team leading 12th goal of the post season, while Kyle Wood and Daniil Vertiy picked up the assists.

Although North Bay put up two goals in the middle frame, the Colts outshot the Battalion 13-5 and led 3-2.

The third period would see the Colts hold off a North Bay attack that was looking to tie the game. Despite North Bay’s efforts, it would be the Colts who would seal the deal and add a fourth goal midway through the period.

Continuing his excellent playoff run, it would be none other than Justin Scott who would net his 14th of the playoffs with a slick deke to beat Smith. Andrew Mangiapane and Webster had the assists on the Colts insurance goal, making it a 4-2 game.

The Battalion would pull Smith with less than two minutes to play, but Blackwood and the Colts would stop all attempts to earn the win. Both teams had 26 shots on goal through 60 minutes.

Wednesday the teams will have a break before returning to action Thursday night in North Bay for Game 4 of the series. If needed, Game 5 is scheduled for Saturday, April 16th, and tickets are available now online at www.ticketbreak.com or by calling 1-866-943-8849.