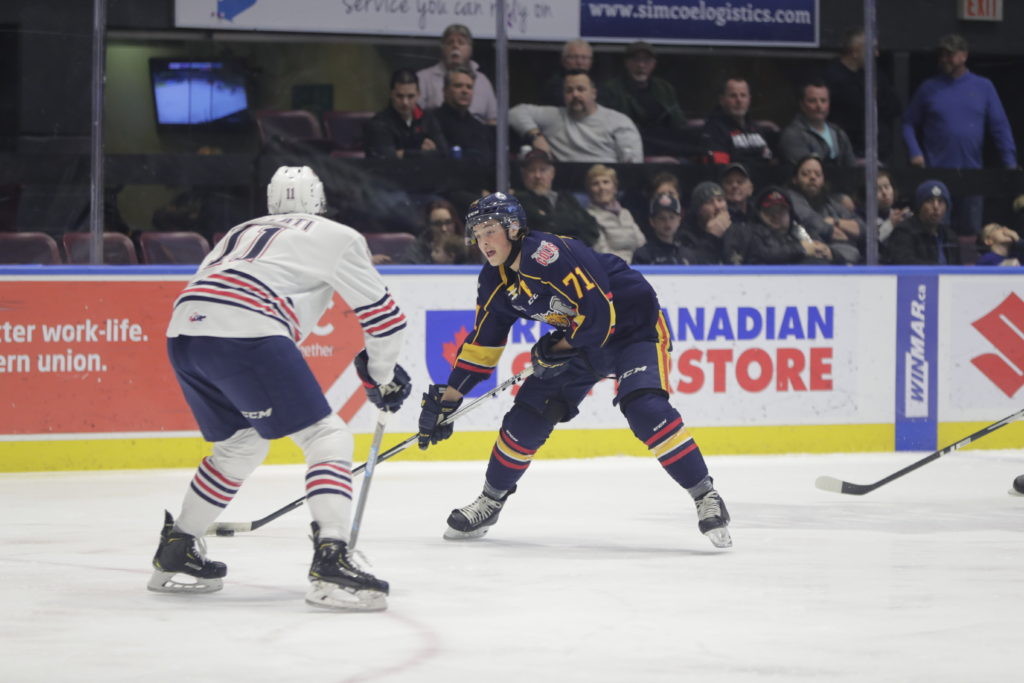 The Barrie Colts were at home tonight against the Oshawa Generals in the first of three games this weekend. Tonight marked Todd Miller’s debut as Interim Head Coach of the Colts, after the news earlier this week that Warren Rychel had been let go by the team.

Arturs Silovs got the start in net.

The Colts got the better of Oshawa in the first period in shots, 17-8, but Jordan Kooy stood tall and kept the game scoreless through the first 20 minutes.

In the second period it was Tyson Foerster opening the scoring on a hard wrist shot that went five-hole from the low slot. Ethan Cardwell added the assist. After that, on the powerplay, it was Luke Bignell finishing a nice passing play to put the Colts up by two. Aidan Brown and Tyson Foerster got the assists.

It was Tyson Foerster striking again early in the third period with another five-hole wrist shot. Evan Vierling and Luke Bignell got the assists. Less than a minute later it was Josh Nelson scoring unassisted on a breakaway, earning him his first goal as a member of the Barrie Colts. The Colts continued to pile on the pressure, and eventually it was Brandt Clarke scoring from the low slot, earning him his first OHL goal.

The Colts are back in action Saturday night against the Hamilton Bulldogs. Saturday will be a special night at the Colts Centre as Bryan Little will be in town for his iconic number 18 being retired to the rafters. Tickets for Saturday’s game can be purchased here: https://barriecoltscalendar.ticketpro.ca/