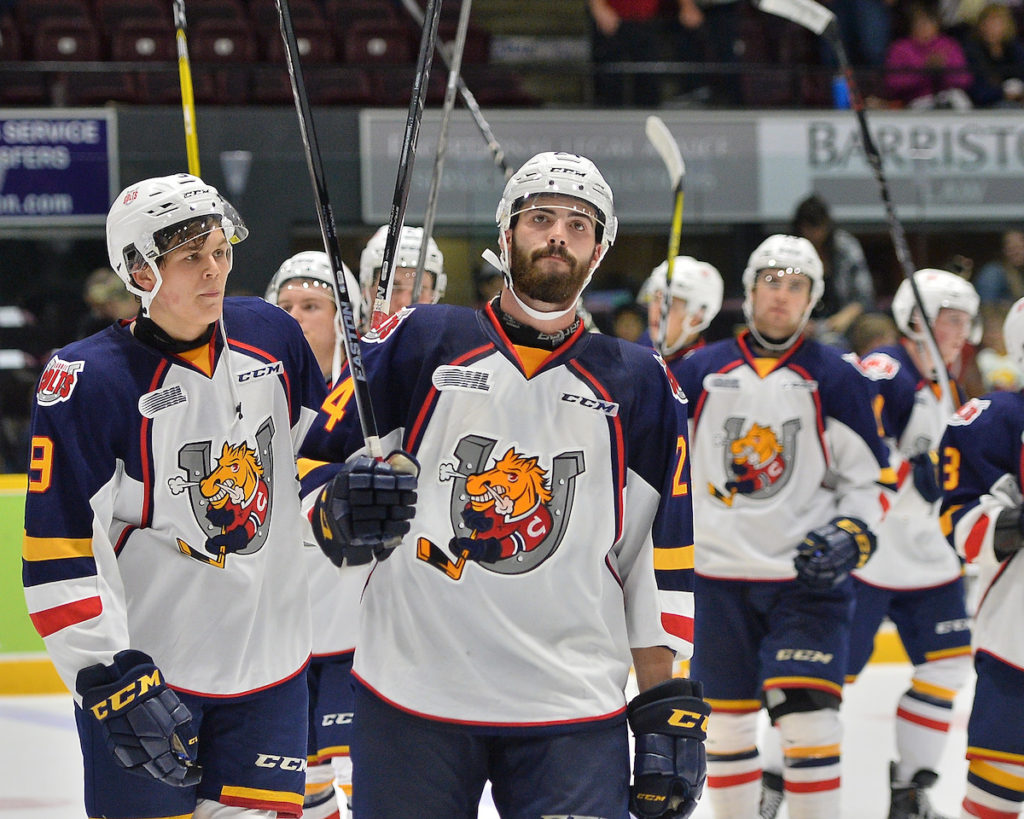 A five-goal first period would set the tone for the rest of the evening as the Barrie Colts ended their six-game losing streak with a dominating 8-2 win over the Sudbury Wolves Thursday.

Christopher Cameron got the party started, 1:41 into the game, with his first career OHL goal. His wrist shot from the point managed to squeak its way through Zach Bowman’s pads. The Wolves have now lost four in a row.

The Wolves responded quickly less than a minute later. Lucas Chiodo was the only Colt back when Ryan Valentini came down the ice on a two-on-one and roofed his shot over Christian Propp to tie the game 1-1.

The Mississauga, Ont. native nearly gave the visitors the lead when he toe-dragged a defender and fired his shot off the crossbar.

That’s as close as the Wolves would get.

Zachary Magwood’s four-point night began when his first goal of the game kick-started the first-period offensive explosion midway through the opening frame. Streaking down the right wing, he made a little deke of his own before putting his shot past Bowman’s blocker, far side, to make it 2-1.

Minutes later Chiodo put his eighth goal of the season into the roof to increase the lead to 3-1, after Bowman made the original pad save while sprawling across the crease.

Another rebound led to another goal in the top shelf. Giordano Finoro snagged a turnover at the offensive blue line and pushed it ahead to Magwood for the partial break, who eventually buried his own rebound.

Thomas Hedberg capped the period’s scoring and a Colts 5-1 lead on the power play, when his seeing-eye wrist shot found the back of the net with less five minutes to go in the period.

Fans at the BMC got to hear the goal horn two more times in the second period.

After a Dmitry Sokolov marker early in the period made it 5-2, the Colts continued to wreak havoc on the twine.

Kiril Nizhnikov put one through Jake McGrath’s five-hole, who started the period in place of Bowman, to make it 6-2.

While the offence was getting all the attention Thursday, Propp also made some big saves throughout the game as well.

While the Wolves were on their first power play of the game, Propp stopped the initial shot, but with the puck trickling to the goal line, he swung his stick back to swipe it off the line at the last second.

Kyle Heitzner also joined the goal parade with less than four minutes to go in the second, when he took a cross-ice feed and buried a half-slapper into the top of the net to make it 7-2.

Finoro would ensure Colts fans would have the opportunity to stand up and cheer at least once in the third when his fourth of the season made it 8-2.

The Colts will take this new-found confidence into the weekend when the Ottawa 67’s visit Barrie Saturday.