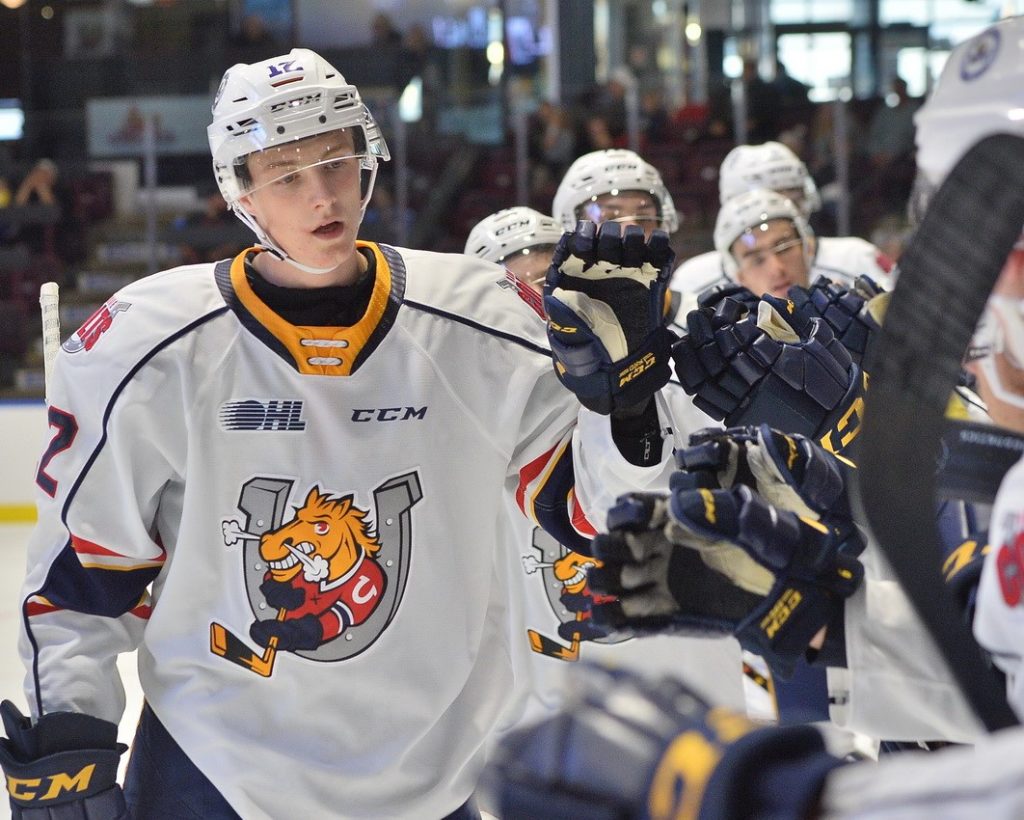 A huge four-goal third period surge and five unanswered goals would make it two for two on the weekend for the Barrie Colts as they took down the CHL’s top ranked London Knights in a 6-2 win Saturday night.

Matej Pekar continued his weekend tear leading the offense with three goals and an assist while Arturs Silovs earned his 1st OHL victory stopping 37 saves in his Colts debut.

Coming off a convincing shutout win the night prior in North Bay to open the season, the Colts were looking to continue the win streak welcoming the London Knights into Colts Centre.

While the Knights had their own home opener spoiled one night earlier, they were poised to start strong and get the early lead.

The Knights would strike first at the 2:44 mark. Max McCue would sneak behind the Barrie defense, Silovs making the initial stop, but Antonio Stranges would bury the rebound to give London the opening lead.

With the Colts on a powerplay midway through the first they’d get the equalizer. Off a mad scramble in front of the Knights net, Colts captain Jason Willms would bang in his 1st of the season. Assists going to Tyler Tucker and Pekar.

Minutes later the Knights would come right back to retake the lead. With numerous bodies tied up in front of Silovs, Connor McMichael was left alone in the slot to make it 2-1.

Barrie would put the pressure on throughout the middle frame and while a sure a goal off the stick of Dalton Duhart from his knees was in sight for the former Knight, the glove hand of Jordan Kooy robbed him of the chance holding the lead.

Eventually the Colts persistence paid off. Duhart would find Colts rookie Brandt Clarke driving hard to the net and Pekar would bury the rebound to knot things up at two. The goal would earn Clarke his first OHL point and Pekar would tally his 3rd of the year.

At 7:50 of the third, the Colts top line connection would strike again to give the boys their first lead of the game. Willms won the battle in the corner to feed Tyson Foerster who ripped it by Kooy for his 1st of the year to make it 3-2.

That wouldn’t be it for the top line combination as just a few minutes later the grind work by Willms down low would have the boys ahead by two. After Willms wrap around chance would be denied, Pekar banged home his 2nd of the night to double up the Colts lead.

The offense continued as Bignell making a cross crease deke made it 5-2 and just moments later Pekar would complete the hat trick on a beautiful individual effort. While driving it hard to the net, falling to the seats of his pants he’d manage to slide it to the back of the net.

The Colts are off for the rest of the weekend now, but will return to action Thursday September 26th as they host the Owen Sound Attack at Colts Centre.