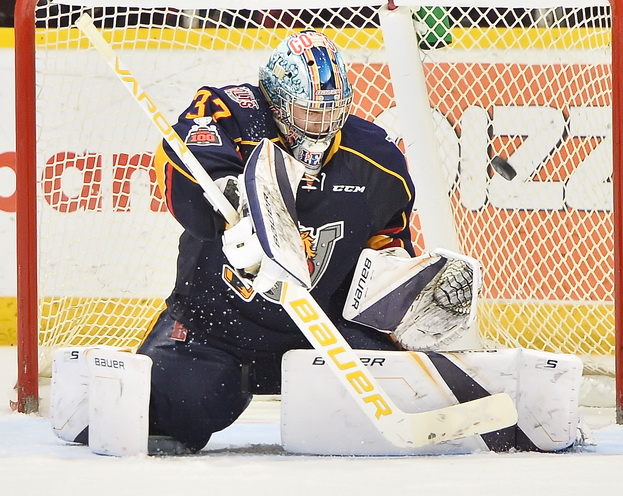 Zach Magwood would rifle a shot past Jeremy Helvig just five minutes into the third period Friday night eventually proving to be the game winner as the Barrie Colts would take a 4-1 victory and head back to Kingston with a 2-0 series lead.

Andrei Svechnikov would seal the victory adding two goals in the final minute of play giving the Colts the 4-1 victory.

One of the biggest highlights of the night would be the play of Colts netminder Leo Lazarev who would make a tremendous stick save while falling to his back to preserve the Colts lead, just one of his 40 saves on the night.

If the series opener were any indication, the two teams proved it would be much of what was expected being a seesaw battle throughout game one for the evenly matched clubs, and for most of Friday night Barrie and Kingston would neck and neck again.

The Colts would kick things off early, keeping the momentum going from Wednesday night.

Less than three minutes in Kingston would go down a man opening the door for the Colts to capitalize. Playing a give and go from the point Zach Magwood would put it back on the tape of Justin Murray to wrist a shot squeaking under the glove of Jeremy Helvig. Joey Keane would also pick up an assist on Murray’s 2nd of the playoffs.

The physical play would definitely pick up throughout the period and both teams would trade numerous scoring chances but the shots would remain even at 11 apiece and Lazarev would keep the boys up by one heading into the intermission.

In the second it would be all Frontenacs for much of the opening minutes of the frame building a 13-0 shot advantage. Lazarev would do all he could to keep the visitors off the board, but at 6:58 a shot from Brett Neumann would deflect off Lazarev ricocheting in the crease for Jason Robertson to bury the tying goal.

The Colts would hold off the stern offensive attack from the Kingston forwards the rest of period and mount a late push back with Svechnikov coming within inches of putting the Colts back in front, but Helvig would snag the loose puck as it bounced on the goal line with seconds remaining.

In the third it would be the Colts grabbing the lead just under five minutes into the final frame. Lucas Chiodo would drop to Magwood who’d snipe a shot to the top right corner past Helvig for his 6th of the playoffs. Tyler Tucker would also on the go ahead goal.

Kingston would do all they could to try and get the equalizer but the Colts shut the door and eventually force the Frontenacs to turn the puck over and Svechnikov would seal the game for the Colts.

With just 1:01 left Svechnikov would steal the puck finishing off a beauty deke past Helvig to give the Colts the insurance and with just seconds remaining he would do it again with an empty netter to make it 4-1.

The colts will now travel to Kingston for games 3 and 4, beginning Sunday with a 6pm puckdrop from the K-Rock centre.