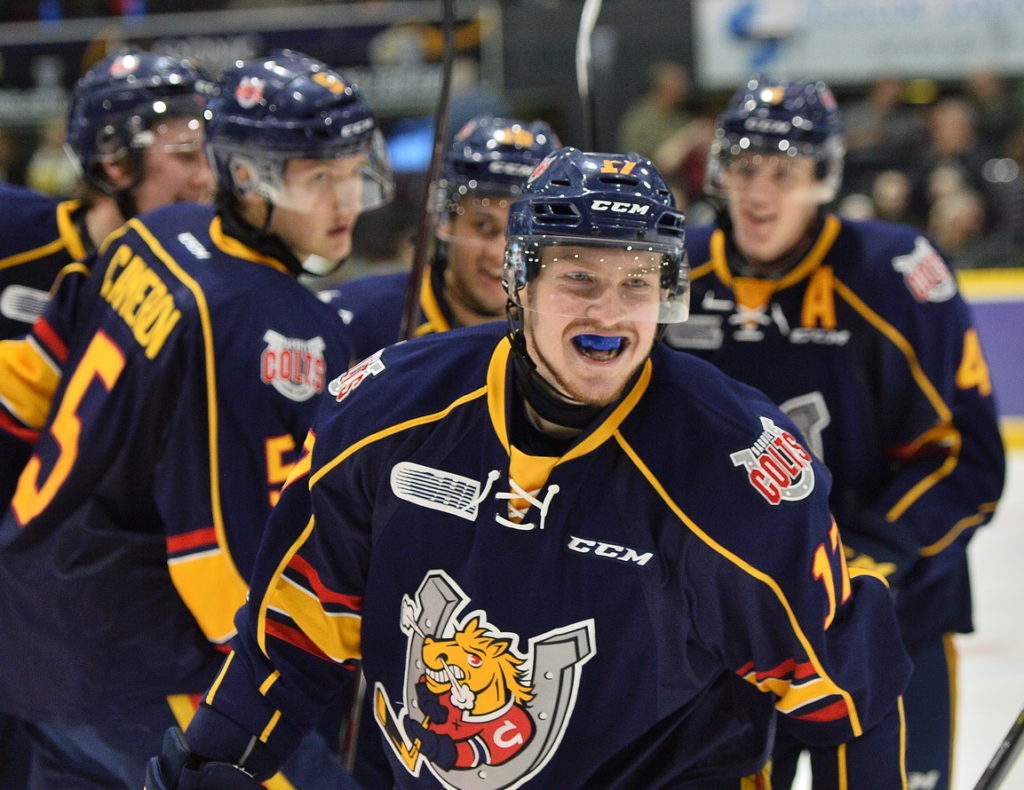 The last time these two teams met it was all Barrie in the first period. Tonight was no different as the boys in blue got off to a great start in front of the home fans.

They would be rewarded with their strong start as Joey Keane snapped one past Stephen Dhillon on the IceDogs to open the scoring just over three minutes into the opening period. Andrei Svechnikov and Aaron Luchuk picked up assists on the games opening goal.

The Colts would keep up the relentless pressure as the shot category heavily favoured the home team. Barrie was going after the glove hand on many occasions in the first period and went to it again. It was Kyle Heitzner who went glove side and a little on the inside, one Dhillon couldn’t handle as it bounced up and by the Niagara goaltender to give Barrie the 2-0 lead. Luke Bignell would tally the only assist on his 5th goal of the season.

That’s how the period would end as the Colts would be up 2-0 and leading on the shot clock 18-5 after twenty minutes of play.

In the second it was more Colts. Less than a minute into the period on a Barrie powerplay it was Dmitry Sokolov getting set up in the slot before being denied on his first opportunity but pounced on the rebound and banged it home quickly to give Barrie the 3-0 lead. T.J. Fergus and Svechnikov tallied assists on Sokolov’s 25th of the season.

The two teams would skate to four on four action and Barrie would get a glorious opportunity to extend their lead to four but they were denied on an odd man rush. Back the other way went the puck and the IceDogs as they were able to find the back of the net. It was Jonathan Schaefer finishing off the perfect pass to him all alone in front to get the visiting Dogs on the board and cut the lead to 3-1.

Niagara would use that energy to keep things up and execute on a powerplay there shortly after. It was Akil Thomas absolutely burying one on the man advantage and just like that the IceDogs were back in the game cutting the lead to 3-2 and putting Barrie back on their heels despite being outshot 2:1.

After having numerous amounts of chances to extend the lead Barrie was denied on many occasions, but they wouldn’t let up. It would pay off very late in the period as Lucas Chiodo had the puck somehow bank in front and he would jam away at it and it would be chipped into the back of the net for his 14th of the year. Jason Willms and Justin Murray would pick up assists on the late marker.

Barrie would carry the 4-2 lead into the intermission.

Nearing the midway point of the third period the home team would tally another one. Just minutes after getting a goal disallowed Sokolov would help set up one that would stand. He came along the wing before firing a pass across the ice to a wide open Aaron Luchuk on a two on one and he made no mistake netting his 36th of the season.

Barrie wasn’t done there as Lucas Chiodo and Dmitry Sokolov teamed up for one that you’ll be seeing on the highlight reels all weekend long. Those two moved the puck back and forth to complete the Colts’ sicth goal of the game that Sokolov banged home for his second of the game. Luchuk was credited with the second assist.

The Colts are back in action next Friday night in Sudbury before heading to Sault Ste. Marie the following night.  Barrie won’t be back at home until February 3rd where they will take on the Windsor Spitfires.