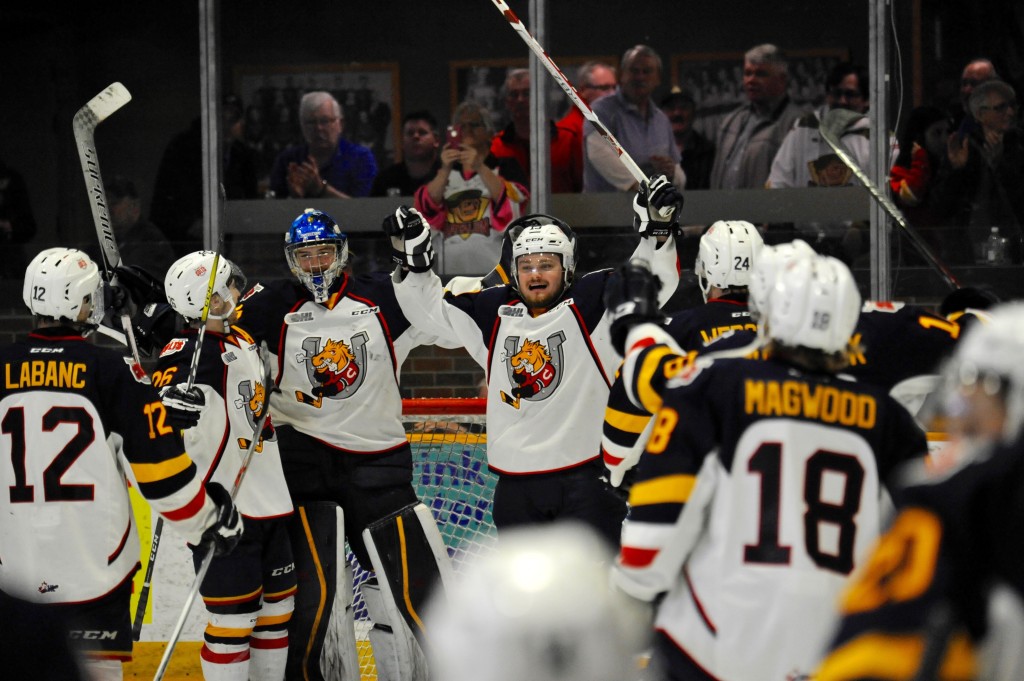 In a do or die game for the Battalion, the Colts traveled to North Bay for game four in the Eastern Conference Semi Finals. After taking a 3-0 series lead, the Colts looked to finish the job Thursday night to sweep the series, already knowing that the Niagara IceDog would be the opponent in the finals.

Both teams would dress the same line ups coming in to the night, with Mackenzie Blackwood between the pipes for the Colts, and Jake Smith in goal for the Battalion.

The Colts would get on the board first midway through the opening frame. After Andrew Mangiapane and Kevin Labanc got the puck on net and drove hard, the puck came loose to Giordano Finoro who was on the doorstep. Finoro tapped it home to notch his first goal of the post-season, giving the Colts a 1-0 lead.

Late in the period, after Ben Hawerchuk and Max Kislinger were penalized for charging and high sticking respectively, Labanc put a clean shot past Jake Smith to score his sixth goal of the play offs. Greg DiTomaso and Mangiapane were credited with the assists on the 2-0 goal.

Through the first twenty minutes, although the Colts held a 2-0 lead, they were outshot 11 to 6.

Four minutes in to the second period, the Troops saw a great chance going in on a 3 on 2, but Blackwood denied them, shutting the door. Moments later, the Colts transitioned up ice and Rasmus Andersson made a great play, making a slick pass through the slot to Mangiapane. Mangiapane was in perfect position and beat Smith with a low shot to net his seventh of the playoffs, extending the Colts lead to 3-0 early in the second period.

With less than two minutes to play, Mathew Santos had a great chance in the slot as he pulled up before firing a shot on net. Blackwood however wasn’t letting anything past him as he stopped his 19th shot of the game on that Troops chance and the 8th of the second period. Smith faced 7 shots in the second period.

Only 16 seconds into the third period, Andersson would be penalized with an unsportsmanlike misconduct after Daniil Vertiy was sent to the box for slashing. Neither team would make good on any chances during that 4 on 4 span, but the Colts drew another penalty and had a flurry of chances waiting for the delayed penalty to be called.

The Colts would extend their lead just over six and a half minutes into the third period when Mangiapane sniped his second goal of the game. After Labanc got the puck up into the Battalion zone, he fed Justin Scott breaking through the slot. Scott corralled the puck then dished it to Mangiapane who ripped a shot past Smith to make it 4-0.

The Troops wouldn’t be able to come back from that, and the Colts would seal the deal with two goals from Cordell James in the last five minutes of the game. Keigan Goetz and Anthony Stefano assisted on James’ first goal, while Webster and Andersson assisted on the sixth and final goal.

With the win, the Colts move to the Eastern Conference Finals against the Niagara IceDogs. Ticket information and game times will be provided soon.