Colts swarmed by the Sting 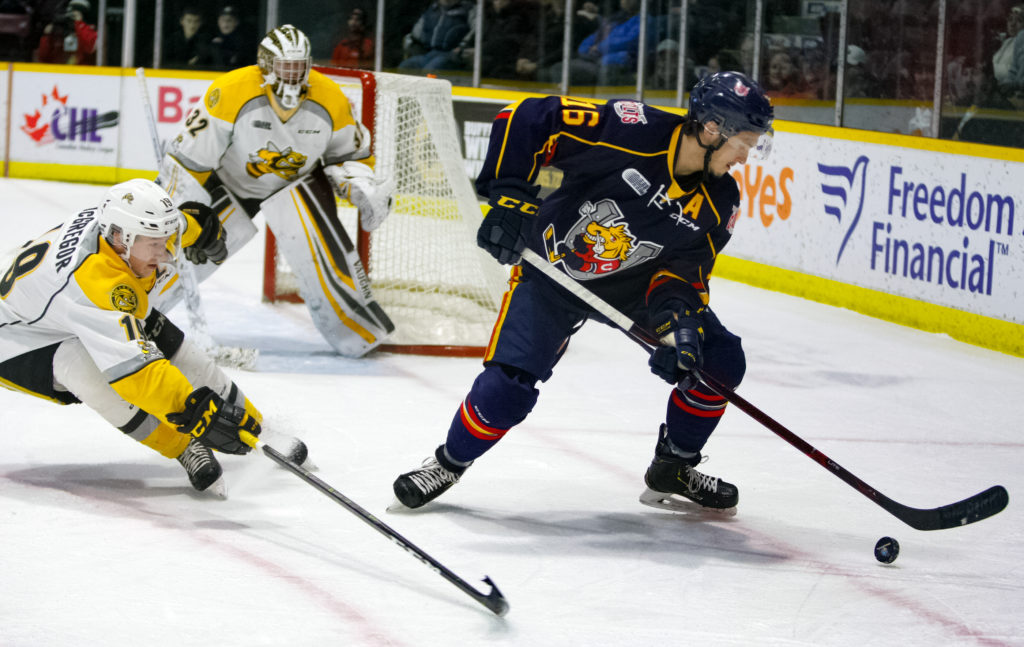 Coming off an impressive 4-0 victory over the Kingston Frontenacs on Saturday, the boys were back in action Thursday night in their second game against the Western Conference’s Sarnia Sting this season.

The last time the Colts went head-to-head with the Sting in November, the boys galloped right past to secure a 3-2 win, but this Thursday night would be a different story as six different Sting players would find the back of the net as the Colts suffered a 7-2 loss.

In an unfortunate start to the first period, Sarnia left wing Brayden Guy gingerly slipped the puck past Colts starter Kai Edmonds to begin the scoring. Despite leading in shots on goal, as the period continued the Colts just couldn’t seem to line anything up. With less than 10 seconds left in the first period, the Sting’s Ryan McGregor slapped a pass across to  Mitch Eliot, who fired it past Edmonds to secure their lead over the Colts and conclude a disappointing first period. No matter how hard they tried, the boys just couldn’t swat Sarnia away.

Arctic winds weren’t the only thing blowing past Barrie tonight. As the second period progressed, Sarnia continued to dominate the Colts at every turn. Jacob Perreault solidified Sarnia’s lead with a goal seven minutes in to the period.

However, it seemed like the boys still had some fight left in them. The puck was knocked loose and maneuvered by Aidan Brown to Jacob Tortora, who fired it to Ryan Suzuki. Suzuki took advantage and snapped the puck past Cameron Lamour, for his 16th goal of the season and restoring some hope for the Colts. Sadly, Sarnia wasn’t just buzzing around. An unlucky deflection snuck past Edmonds with eight minutes left in the second period, putting the Sting back ahead by three.

The beginning of the third period marked a stronger start for the Colts as Riley Piercey led the attempt to close the gap with a goal just over three minutes in. His 2nd of the season assisted by Chris Cameron and Victor Hadfield. But the Colts still had a long way to go, and the boys were saddled with the difficult task of catching up to the Sting.

However, in the last five minutes of the third, it was time to wash the wound and apply the cold pack because the Colts were stung. To secure their victory, Sarnia knocked 3 more goals past Edmonds. The first two by Sean Josling, followed up by a goal by Franco Sproviero. The Sting left the BMC with a win as sweet as honey.

Itching to catch a game? The Colts will hit the road to face the Western Conference leading London Knights Friday night before returning home to the BMC Saturday, for a date with the Mississauga Steelheads.

You can purchase tickets online through the Barrie Colts website, by calling 1-888-655-9090, or in person at the Colts Store, located inside the Barrie Molson Centre. See you at the next puck drop!