Colts Storm Back to Bury the Troops 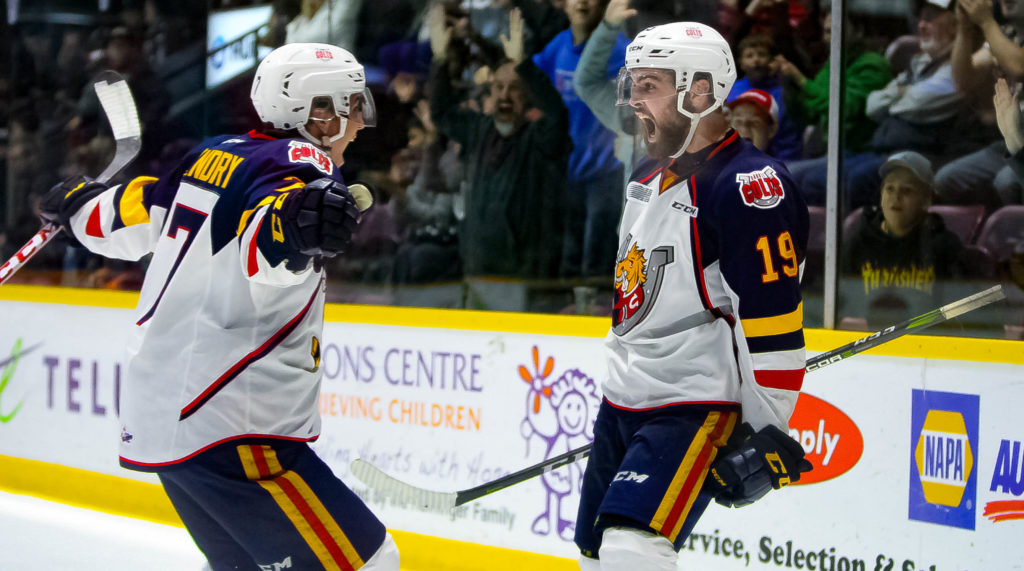 Jason Willms would score the game winner with just under two minutes remaining and the Barrie Colts would storm back scoring four third period goals enroute to a 5-3 victory Saturday night at the Barrie Molson Centre.

In what started out as a penalty filled affair and defensive minded game from the North Bay Batallion, the relentless Colts would come roaring back lead by the charge of Zach Magwood and Jason Willms each registering three point nights in the comeback.

Your Central division leading Barrie Colts were back at it again Saturday night to take on the North Bay Battalion for the 3rd meeting in just four weeks of the season between the two clubs.

The Colts coming off a big home ice victory Thursday night versus the defending OHL Champion Erie Otters were looking to continue the flurry of offense and momentum against the division rival.

The Troops began the night having other ideas, as the Colts would be held scoreless in the 1st but plenty of penalties would fill the score sheet becoming a recurring theme throughout the contest.

Just one minute into the action North Bay would strike. Adam McMaster would attempt the cross-ice feed but deflect directly off the leg of a Barrie defender straight on to the stick of Luke Moncada, he snapped one by Leo Lazarev on their first shot of the game to go ahead early.

The Colts would kill off a trio of penalties of their own but with just under 6 minutes remaining, with the Colts still down a man the Battalion would increase the lead to two. Andy Baker would skate the puck out front of the Barrie goal wiring one past Lazarev to carry a 2-0 lead into the intermission.

The Colts would come out flying in the second, just 11 seconds in they would cut the lead in half.

Off the opening faceoff the Colts would gain possession. Magwood skating across the blue line would feed Lucas Chiodo. He’d quickly snap a shot, with the troops goaltender Julian Sime getting a piece of it with the blocker but would trickle over the line to make it 2-1 and his 5th of the season. Willms would also register an assist on the play.

Much like the first period of play, shortly after the goal the parade to the penalty box would continue.

At 6:15, the Troops would regain their two-goal lead once again. Barrie would get caught trying to make a line change on the penalty kill, and Cam Dineen would race down the right side firing one to the back of the net to make it 3-1 for North Bay.

The Colts would need a big third period, as they would begin the final frame down by two goals as well as killing off another two-man advantage.

The boys in white would get one of their best chances at the midway point of the third period as Magwood would get a clear shot from the right circle, it would beat Sime but ring the goal post and out as the score remain the same.

The Colts would keep up the pressure and eventually get the comeback started. Ryan Suzuki would fire a quick low shot that was redirected by Kirill Nizhnikov to the back of the net to make it a one goal game and mark his 2nd goal of the campaign.

Just moments later after a point shot from Tyler Tucker would be blocked by a North Bay defender, the puck would drop right to Magwood and he would make sure on this one tying the game at 3 for his 6th of the season. Willms getting his second helper of the game.

With just under two minutes remaining in the third the Colts would seal the victory. While shorthanded Kade Landry and Willms would find themselves breaking in on a two on one. Landry would feed Willms, he’d make no mistake taking the victory and getting his 4th goal of the season.

Magwood would add the insurance marker on the empty net for his 2nd of the game.

The Colts are next in action Saturday October 21st as they will host the Sarnia Sting for a 7:30pm puckdrop at the Molson Centre.