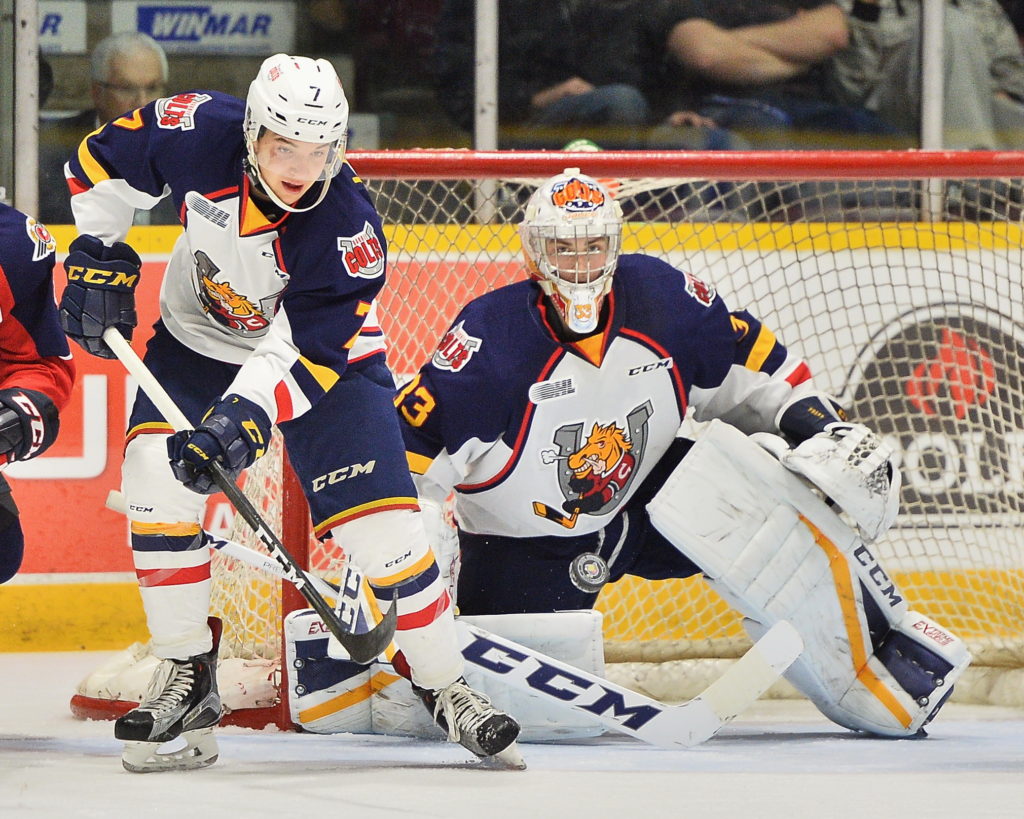 Much like the Battalions previous visit to the BMC, the Colts would squander the Troops offense.

From start to finish the Colts squad would dominate the North Bay Battalion including a huge second period giving the boys an insurmountable lead.

Ben Hawerchuck would lead the charge offensively with a four-point night (2 goals, 2 assists) and Kirill Nizhinikov would score two of his own.

The Battalion marching into the Molson Centre Saturday night for the final meeting between the central division rivals were sitting just two points back of the final playoff position in the Eastern Conference.

Barrie returning home after a tough loss the night before on the road in Sudbury would see a great opportunity to get back in the win column and play spoiler.

Christian Propp making his 30th start of the season would lead the Colts to a strong opening period.

Early on the boys would make a mental mistake early getting caught with too many men. Barrie would kill off the penalty and get an opportunity of their own with the man advantage.

With the Colts on the powerplay they would open up the scoring by some pretty passing. Joey Keane sending one low to Lucas Chiodo, he would find Nizhnikov wide open on the right side and rip one under the bar for his 11th goal of the season.

With just under four minutes remaining in the first the Troops looked to even things up. Brett McKenzie would slip one into the Barrie net, but after a lengthy review the goal was disallowed, as the play prior was deemed offside.

The Colts would get called on numerous penalties to finish out the period testing Propp on several occasions but the Colts net minder would shut the door making 12 saves to give the Colts the one goal lead into the intermission.

Early on in the second period the Colts would add to their lead. Hawerchuck would cut to the middle and slide one under the pads of Batallion starter Brent Moran. Kade Landry would draw the lone assist.

Just thirty seconds later the Colts would strike again. Anthony Stefano would throw one in front deflecting off a defender. Lucas Chiodo would be right there on the doorstep to fire home his 22nd goal of the season.

The Colts would keep the pressure coming. At 4:52, off another odd bounce Chiodo would feed Giordano Finoro beating the Troops goaltender for his 13th low blocker side leading to Barrie’s third goal of the period and spelling the end to Moran’s night.

Julian Sime would come on in relief but Barrie wasn’t done yet. At 6:28, Stefano would find Hawerchuck alone in the slot blasting home a one timer for his second of the period and 14th of the season.

It seemed as if Barrie could do no wrong throughout the middle frame and before you knew it the Colts offense would score again.

With just under five minutes remaining Nizhnikov would also get his second of the game tucking one around Sime as Hawerchuck would find him cutting to the front of the Battalion goal.

At the end of two periods, despite being outshot 24-21 the Colts would hold down a 6-0 lead.

The third period would see the Colts continue to handle most of the play and limit the Troops for any chances.

Barrie would kill off a late penalty called with two minutes remaining and Propp would make 8 more saves to preserve the shutout.

Barrie will next be in action March 15th as they head to Oshawa to take on the Generals and March 17th in Mississauga before seeing the boys for their final home game of the season March 18th versus the Kingston Frontenacs.