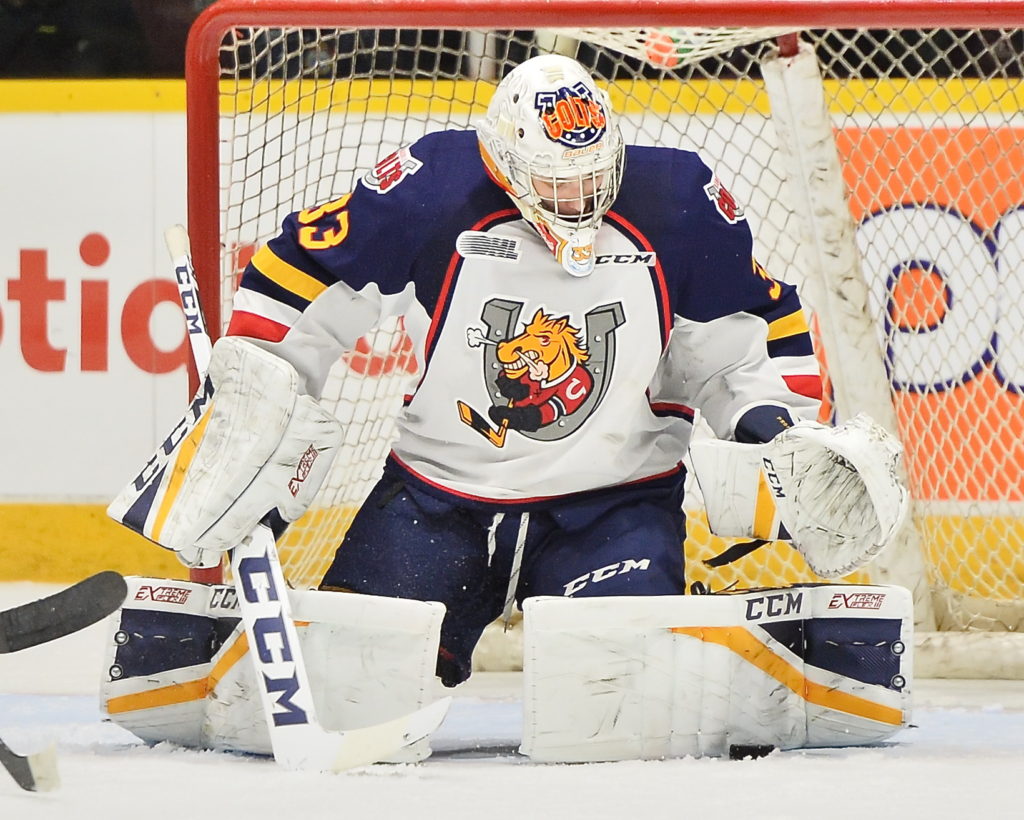 Leo Lazarev would halt the Colts offense in a 3-1 loss to finish off a gruelling three game road trip.

The Colts began their weekend road trip in North Bay flying high after a three-goal effort and overtime winning performance from Roy Radke, but would stumble out of the gate Saturday night in a meeting with the Peterborough Petes.

With the fatigue setting in and third game of the weekend the Barrie offense would struggle to come up with many strong chances in Ottawa’s end, and when they did they were met by the resilient play of the 67’s netminder.

Roy Radke would score the lone marker for Barrie putting him in a tie for the team lead in goals.

A frigid Sunday afternoon tilt would see the Barrie Colts travelling further east to the nations capital to face the Ottawa 67’s. Barrie leading the season series 2-1, it would be the final meeting between the two teams.

With just over two weeks remaining in the regular season schedule the Ottawa 67’s would find themselves clinging to a playoff position.

It would be a slow start for both teams, as not much in the way of offensive chances for either side would be made in the first half of the opening period.

Barrie’s first good chance of the game came just over eight minutes into this one as Lucas Chiodo would come streaking down the right side and fire a shot blocker side, creating a great rebound opportunity but would be swallowed up by Lazarev.

Just past the midway point of the first the 67’s would score on a broken play. A dump in from centre ice would see Ottawa pickup a lucky bounce from the end boards and Mathieu Foget would bury the opening goal.

The 67’s would carry the 1-0 lead into the intermission.

The Colts would need to find ways to generate offense and create traffic in front of Lazarev if they were going to be able to solve the Russian goalie who was also making his third straight start in as many nights.

The first powerplay of the game wouldn’t come until the opening minutes of the second as Colts starting net minder Christian Propp would get called for a high stick.

During that penalty kill the Colts would get called once again giving the 67’s a two-man advantage but the Colts would be able to shut down any chances from Ottawa and keep the deficit to just one.

The two teams would each trade powerplay opportunities midway through the second period, but finally with just under four minutes remaining in the middle frame the Colts would break through.

Radke would skate the puck out of his own zone into the Ottawa end sliding one under Lazarev. The goal coming short handed for his 22nd of the season to tie this game up at one goal apiece. Assists would go to Joey Keane and Jason Smith.

Just two minutes later, before the period would be over Ottawa would regain the lead.

Peter Stratis would hold the line centering it in front. As the puck came loose in the slot, Sasha Chmelevski would bang it home through the five hole of a screened Propp and take the one goal lead into the final period.

For most of the third period the 67’s would play a tight checking defensive game to limit the Colts chances.

With six minutes remaining in this one Ottawa would increase their lead to two, as Austin Keating would finish off a backhand feed from Artur Tyanulin roofing one over Propp.

Barrie would pepper Lazarev with shots throughout the second half of the third but he would continue to stymie the Colts forwards.

Dale Hawerchuck would pull Propp for the extra attacker with a minute left. Kirill Nizhnikov would come close hitting iron with just twenty seconds remaining but the 67’s would hold on for the victory.

Next up, Barrie will return home Thursday night to host the Mississauga Steelheads and begin one more three in three weekend for the Colts. Puck drops at 7:30pm at the Barrie Molson Centre. Tickets still available at www.barriecolts.com