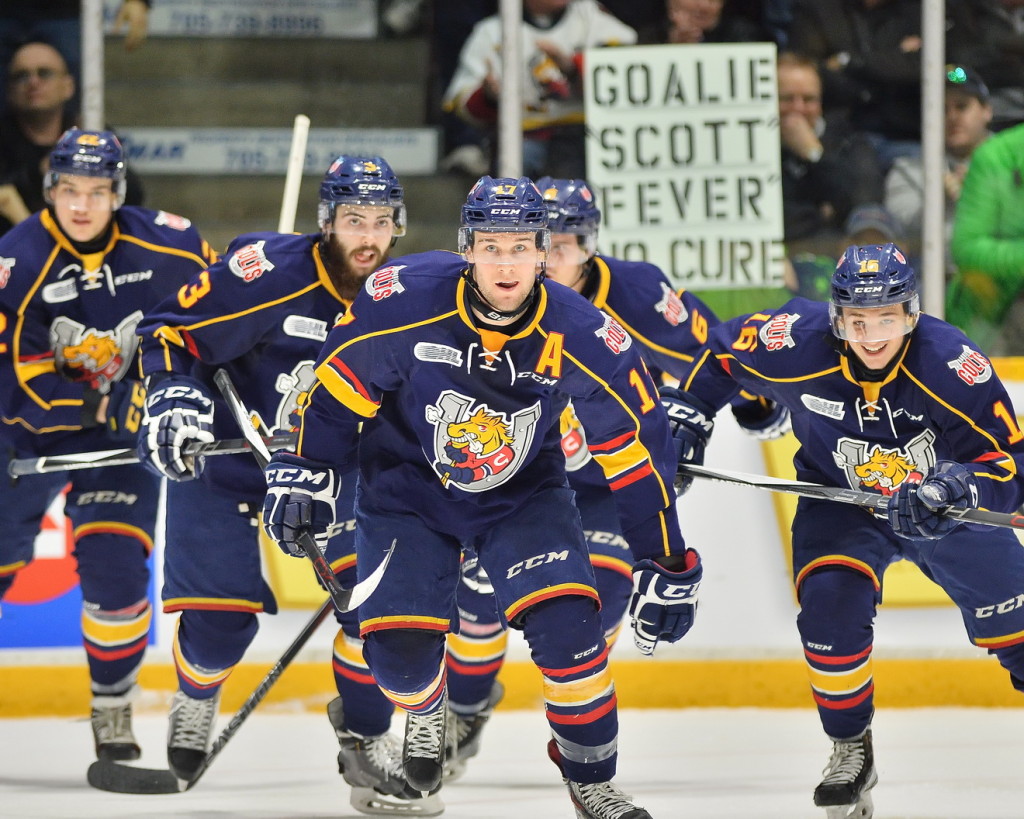 The Colts’ high-powered offence kicked into gear as they scored five times in the third period to take game seven 5-1 over the Mississauga Steelheads. Despite trailing 1-0 after forty minutes of play, the team jumped on the back of Justin Scott as he recorded his second hat-trick of the playoffs to cap off a series in which he scored 10 goals.

The first period saw both teams come out with an abundance of energy as each side looked to establish the early momentum. Mackenzie Blackwood got the start in net for the Colts while Jack Flinn was once again between the pipes for the Steelheads.

Both teams came out flying as each side looked to gain the early momentum. The Colts had the upper hand in puck position as they generated half a dozen quality scoring chances in the first frame. Jack Flinn had other plans however as he kept Mississauga in the game with a couple of wonderful glove saves. Along with Flinn, Mackenzie Blackwood was sharp as well as he turned aside all 9 shots he faced in the first period.

The second saw more of the same from both sides as each team pressed for the game’s opening tally.

The road team would strick first as Mississauga native Michael McLeod buried the loose puck by Blackwood to give the Steelheads a 1-0 lead. Daniel Muzito-Bagenda and Alexander Nylander drew assists on McLeod’s third of the series.

The Steelheads carried that lead into the third, despite the Colts out-shooting them 24-15.

Early in the third, Mississauga would take a penalty as Nicolas Hague was sent off for holding. Although the Colts didn’t score on the man advantage, it provided them with much needed boost in momentum as moments after the penalty expired, Hague would turn the puck over to the red hot Justin Scott who made a move around a Steelheads’ defender before slipping the puck through Flinn’s legs to tie the game at 1-1.

Minutes after Scott evened the game up, another costly Mississauga penalty would pay dividends for the Colts. Following a Damian Bourne checking from behind penalty, the Colts’ powerplay went to work as Andrew Mangiapane got the puck in the slot and ripped one ast a screened Flinn, giving the Colts a 2-1 lead. The goal was Mangiapane’s fourth of the playoffs as Julius Nattinen and Rasmus Andersson recorded the helpers.

Then, 2:25 after Mangiapane put the Colts ahead, none other than Justin Scott would give the team a two goal lead after taking the Kevin Labanc feed at the top of Flinn’s crease before sliding the backhand past the sprawled out goaltender.

Justin Scott would put the game out of reach with 3:31 remaining in the game as he finished off the Greg DiTomaso rebound, giving Barrie a 4-1 lead. Scott’s third goal of the game was his second hat-trick of the series and his league leading 10th goal of the postseason.

Kevin Labanc registered his third point of the contest, scoring his fourth goal of the playoffs into the empty net as Andrew Mangiapane notched the lone assist with just over a minute to play.

Mackenzie Blackwood was near perfect for the Colts as he stopped 22 of 23 shots to earn his second win of the playoffs.

The Colts’ will now face off against the North Bay Battalion with Games 1 & 2 taking place Thursday and Monday respectively. Get your tickets now by visiting BMC Box Office or going to www.ticketbreak.com.