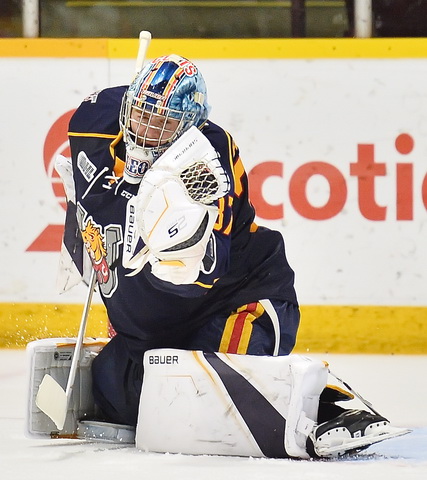 Solid goaltending and an offensive outburst from the Barrie Colts propelled them to a 5-1 victory over the Hamilton Bulldogs on Thursday morning.

It was a rare morning game for the Barrie Colts as they would find themselves in Hamilton for their annual school day game. A 10:30am start would have the boys up and early for some hockey for breakfast.

The scoring would get started early in the first period on a Barrie powerplay. The Colts would work it around on the man advantage before setting up Andrei Svechnikov at the hashmarks for his 28th of the season that beat Kaden Fulcher glove side to open the scoring. Lucas Chiodo and T.J. Fergus would tally assists.

Not longer after the Barrie goal the Bulldogs would strike back. On a two on one it was Isaac Nurse finishing home a pass from Ryan Moore cross crease that beat Leo Lazarev to tie the game early in the opening frame.

The goals kept coming, about a minute later it was Jaden Peca putting the Colts back in the lead. A lead pass from Ryan Suzuki sprung Peca who would beat a Hamilton defender wide and slide it between the pads of the Hamilton netminder for his 10th of the season to restore the Barrie lead. Zach Magwood would be credited with the second assist.

A bit later the Bulldgos were pushing for more. Moore was in on a breakaway but was stopped by the blocker of Lazarev to keep Barrie in the lead. Moments later it was Ben Hawerchuk with a chance all alone on Fulcher but he was also stopped as both goalies had to come up with key saves to keep the score where it was.

With a litte more than five minutes to go in the first period Barrie would get their second powerplay, but it was Hamilton who had the best scoring chance. After the former Bulldog Fergus lost his footing at the blueline Brandon Saiegon would go on a breakway but once again Lazarev stood tall, shutting the door.

The scoring would get started in the second period after a bit of rough stuff in the Hamilton zone. It would lead to a Barrie powerplay. On the man advantage, the Colts would go to work. A cross ice pass by Sokolov to the stick of Chiodo set him up to deke out Fulcher, but put the puck off the post. Willms would stick with it and slide it back in front for Aaron Luchuk who put home his 40th of the season to lead the Ontario Hockey League in that category and put the visiting Colts in front 3-1.

Just over three minutes later on a faceoff inside the Hamilton zone, the Colts would strike again. A faceoff won back by Willms set up Sokolov who came around the top of the circle and snapped one top corner for his 31st of the year and brought the Colts to a 4-1 lead after two periods of play.

In the third period, the Colts were sitting back a bit and were looking to hold off the charge of the Dogs who were pushing for a big comeback in the last frame. Lazarev came up with numerous big stops to keep the Colts in front by three as he continues his strong play between the pipes for Barrie.

Andrei Svechnikov would add his second of the game into an empty net. Luchuk would assist on the 5-1 goal.

The Barrie Colts are back in action tomorrow night as they take on the Mississauga Steelheads on the road. A 7pm puck drop in Missy, before heading home to Barrie to take on the Flint Firebirds on Saturday night.