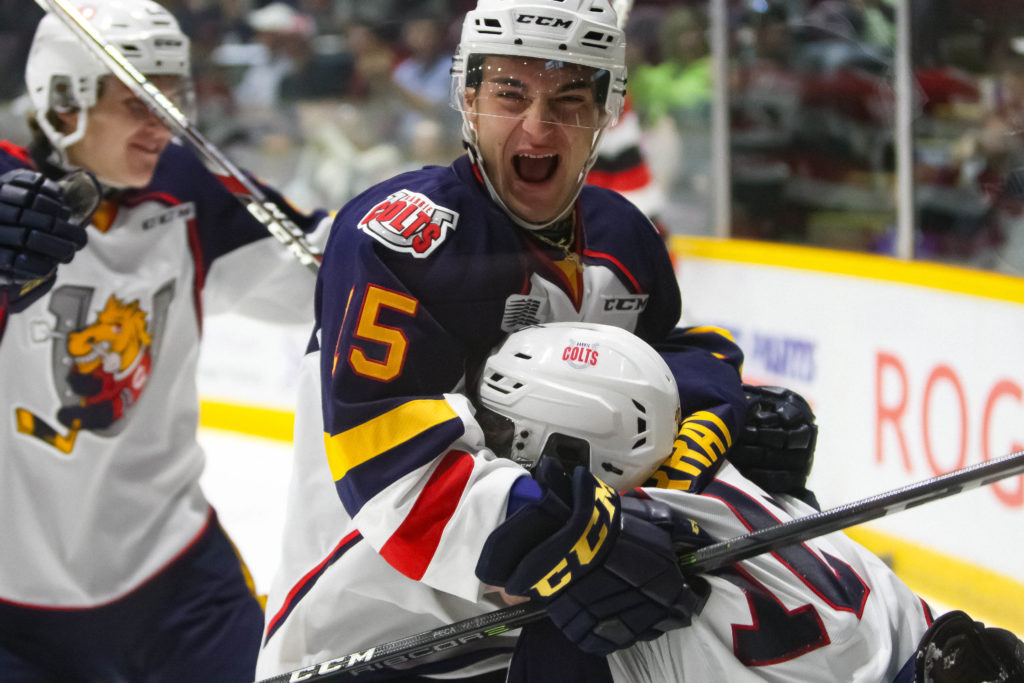 The Barrie Colts skated into Niagara on Saturday night and took a 5-3 victory from the IceDogs to complete a perfect weekend.

The two teams came into this game separated by just four points for the Central Division lead with Barrie holding the advantage. Both teams were looking for that extra momentum heading into the holiday season as this was their last game before a break in the schedule.

It didn’t take long for scoring chances to come. First it was the Colts who had a scoring opportunity when Jaden Peca took a great feed by Lucas Chiodo for a short breakaway but missed the net.

Back the other way it was Leo Lazarev who had to be sharp at the IceDogs were on the doorstep trying to whack one home a couple times but it remained scoreless in the first two minutes.

Later in the period on a Barrie two man advantage Alexey Lipanov nearly opened the scoring as he beat the glove hand of Stephen Dhillon but could not beat the post as it stayed out.

The second period started off quick just like the first did, but this time with some scoring.

It was the Colts who would break the scoreless tie. T.J. Fergus started with the puck in his own end before finding Aaron Luchuk along the near wing. He had Lipanov crashing the goal and tried to make the pass but had the puck go off the Niagara defender and past Dhillon for his 31st of the season and 3rd in as many games with Barrie since joining the club.

Just past the midway point of the period the Colts would strike again. This time it was a bit of a strange bounce. After gathering the puck inside the Niagara blueline Chiodo snapped a shot towards the goal that went off a Niagara defenseman, up in the air and into the back of the net. Dhillon had no idea where it was as it bounced in for Chiodo’s 12th of the year. Ben Hawerchuk and Jaden Peca grabbed assists on the goal.

Moments later the IceDogs would answer back after being on their heels for most of the second period. It was a breakaway for Kirill Maksimov who shimmied and shook to deke out Lazarev to get Niagara on the board.

The IceDogs were wearing Ugly Christmas Sweater jerseys on this night for their home crowd and the ugliness continued with the goals that Barrie scored. After Chiodo had a funny bounce go his way, the Colts would get another ugly bounce. This time it was Jason Willms from behind the goalline in the corner throwing one in front that took a bounce and in behind Dhillon to make it 3-1 Barrie. Ryan Suzuki and Joey Keane recorded assists on Willms’ 18th of the year.

Fireworks were going off once again the early stages of a period. This time in the third it was the IceDogs lighting the lamp. Johnny Corneil was the one who scored it to cut the lead to two, but after further review Niagara was offside prior to bringing the puck over the blueline, keeping the game at 3-1 for Barrie.

Minutes later Corneil wouldn’t be denied this time. He put one home on the powerplay to get the IceDogs back within one.

Niagara received a powerplay with a little over four minutes to go in the third, but it was Barrie that would capitalize. After stripping a defender of the puck Zach Magwood would walk into the Niagara zone and snap one past Dhillon to give Barrie the two goal lead back.

As the penalty would expire and with the goalie pulled the IceDogs put on relentless pressure and it resulted in Danial Singer slamming one home with under two minutes remaining in the third.

Peca would add an empty netter to end any threat of a comeback as the Colts leave Niagara with the two points.

The win also completes the weekend sweep for the Colts picking up all 6 possible points on the weekend and head into the holiday season on a roll.

This game wraps up a three in three for the Colts who will now head into the break. Barrie will be back in action on Thursday, December 28th at home against the Subdury Wolves as they will welcome back former Colt Kirill Nizhnikov for the first time since being traded. Puck drops at 7:30pm. Tickets still available.