Colts Roll Past the Troops 6-1 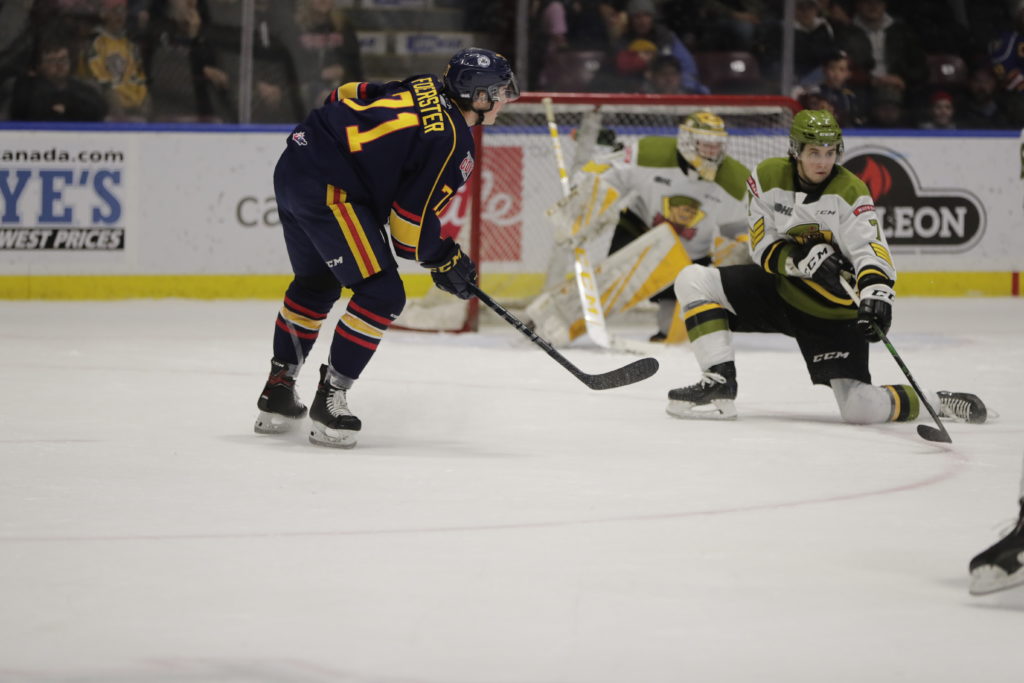 Tyson Foerster would lead the way offensively with a goal and 3 assists and Jet Greaves made 32 saves as the Colts rolled to a 6-1 victory over the North Bay Battalion Saturday night.

Luke Bignell would add a pair and Jack York, Jason Willms and Oliver Smith each scored in the win. The third period marker by Smith was his first career OHL goal.

The Colts returned home Saturday night to take on the North Bay Battalion. The 3rd meeting of the season versus the central division rival would give opportunity to quickly avenge a tough loss one-night prior in Sudbury.

Battling through a tight points race and facing off against a Battalion squad sitting at the basement of the league standings, the night would provide a great opportunity to claw back towards top spot in the Central Division

The Colts would strike first on the powerplay at 7:54. Foerster would let a shot rip from the right circle for his 21st of the season, from Ryan Suzuki and Nathan Allensen.

With just seconds remaining in the first period the Colts increased the lead to two. Bignell would force a turnover at the red line and the boys were off to the races down ice. Playing a give and go with Foerster, Bignell finshed off a great passing play for his 9th of the year.

Greaves making his 18th start would turn aside all 10 Battalion shots in the period as the Colts took a 2-0 lead into the intermission.

It would be a very even second period without much action on scoreboard until late in the frame when the captain would push the lead to three.

Willms would catch a pass at the Battalion blueline before dropping it Nicholas Porco. Porco slid a pass over to Foerster coming into the zone and returned the feed back to Willms directing his 18th of the season to the top corner of the net.

Greaves continued his stellar play in the Barrie goal as the Colts held a 3-0 lead through forty minutes and a slight edge on the shot clock 19-18.

Into the third and the Colts shorthanded the boys would catch a break of their own and increase the lead to four.

Aidan Brown would drop to York who fired it by the glove of Joe Vrbetic for his 2nd of year. Willms tallied his second point of the night picking up an assist on the play.

At 6:17 of the third the Battalion finally got on the board. Mitchell Russell skating into the slot beat a sprawling Greaves to break the shutout for the Colts net minder.

The Colts added their fifth of the night while on a powerplay late in final period as Luke Bignell fired a knuckle puck over the pad of Vrbetic. Foerster picked up his 3rd assist of the night on the play.

With 26 seconds remaining on the clock the boys would clean things up with one more as Smith picked up a rebound and put home his first career OHL goal. Jacob Frasca earned his first point on the play since returning to the lineup with the only assist.

Final shots on goal finished 33-26 for the Battalion, but it was the Colts taking home the victory.

The boys will get some much needed rest and time to heal up as this closes out the weekend. They’ll return to action Thursday night versus the Sudbury Wolves seeking revenge in their chase for top spot in the Central Division.