Colts Roll Over Petes 5-1 to Wrap Up Preseason 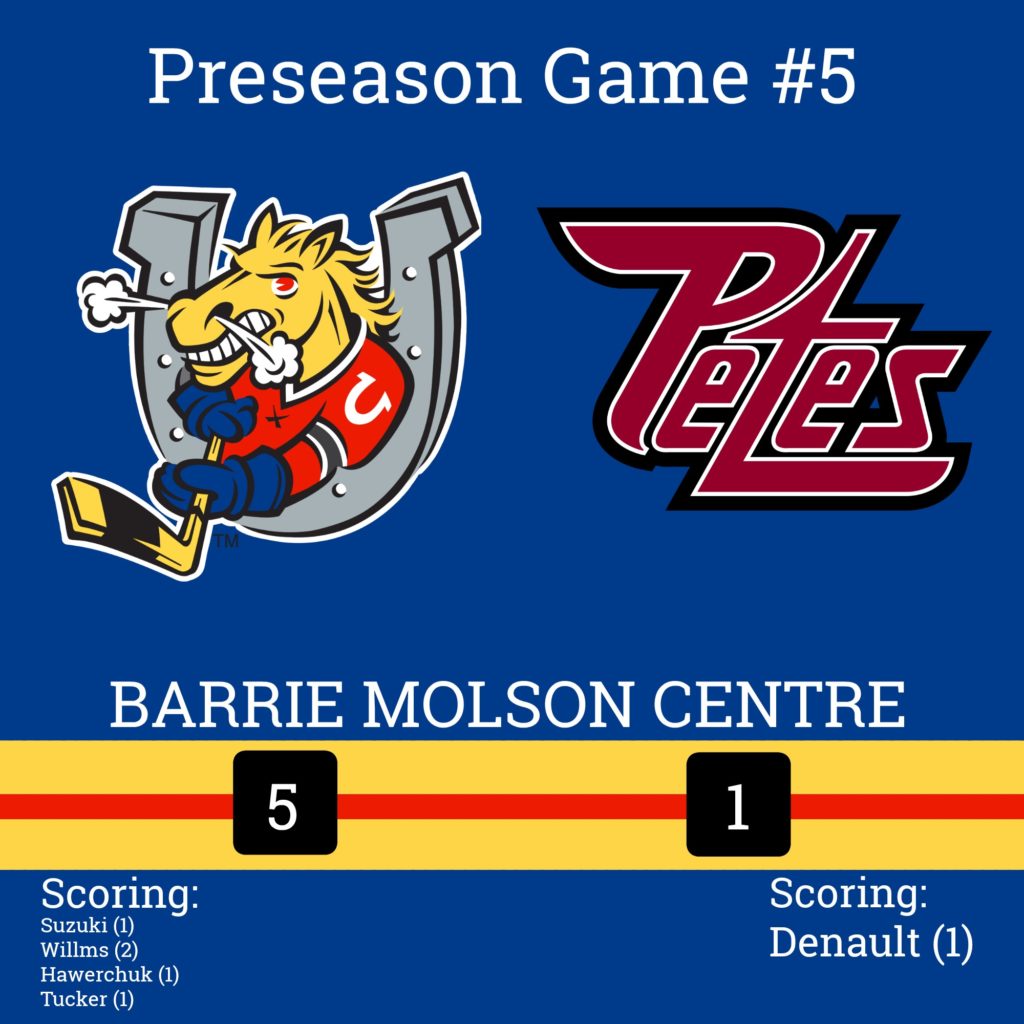 It was a Saturday night in Barrie as the Peterborough Petes were in town to wrap up the preseason. The home club took down the Petes 5-1 in the final game of preseason.

It was the final tune up before the regular season begins on Thursday night against the Owen Sound Attack. The Colts suited up import goaltender Maksim Zhukov between the pipes.

The only noised being made was the of the referees whistle in the opening frame as neither team was able to find the back of the net and made frequent visits to the sin bin.

Early in the second frame it was the home team capitalizing on a powerplay.  Barrie displayed some gorgeous passing that started with Lucas Chiodo finding Ryan Suzuki in the slot before he slid it down low for Jason Willms who peppered it into a gaping cage opening the scoring.  The goal was his 3rdof the preseason.

It was more special teams action, this time on a Pete’s man advantage.  Suzuki picked up a clearing attempt by Chris Cameron and outwaited the Peterborough netminder Hunter Jones and went bloacker side for his 4thof the preseason giving the Colts a 2-0 lead.

The two-goal lead was short lived.  Right off a faceoff in the Barrie zone, Chad Denault won the draw forward and snapped a wrister over the should of Zhukov to get the visitors on the board.

In the final frame Willms would add his second of the night and 4thof the preseason as he slid one in on the backdoor after a soft feed from Jaden Peca to give Barrie the 3-1 lead.

Another powerplay had Barrie go back to work. Nice passing put Tyler Tucker wide open and he went far side snapper past the Petes netminder to extend the Barrie lead.

Ben Hawerchuk would hammer home a one-timer later in the 3rdto give the Colts a 5-1 lead which would end up being the final.

They boys are back in action this coming Thursday for the home opener against the Owen Sound Attack. A 7:30pm start and tickets are still available.