Colts Reel in Victory Over the Fish 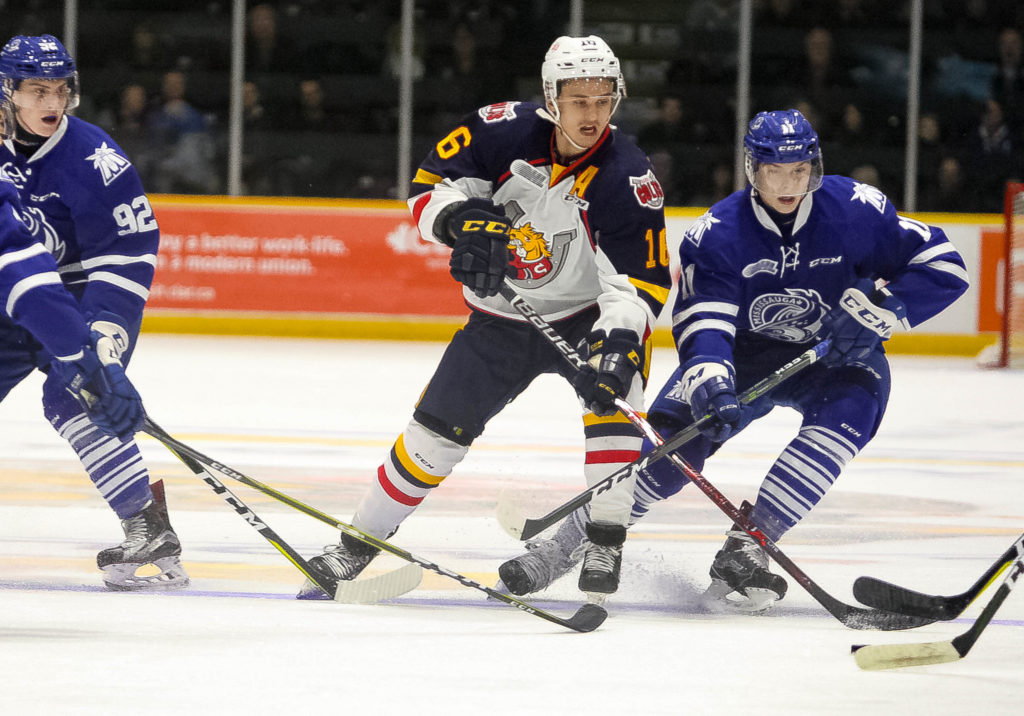 Ben Hawerchuck would score two goals including the game winner late in the second period leading the Barrie Colts to a 6-3 victory over the Mississauga Steelheads Thursday night at the Barrie Molson Centre.

The Colts were back in action for the second of six matchup’s on the season with the Steelheads looking to kick off another three game weekend set on a high note and turn in a much better home performance than in recent weeks for the Barrie faithful.

The action in this one would get started early; The Steelheads would strike first just over two minutes into the opening period.

Nicolas Hague would collect the puck off the boards at the right circle and skate to the slot firing a low shot through a crowd to beat colts starting goalie Leo Lazarev five hole.

Nearing the midway point of the period the Colts would respond.

T.J. Fergus would carry the puck over the blue line before dropping it to Ben Hawerchuck. He’d cut to the middle and pick the bottom corner, snapping it past the glove of Steelheads starter Jacob Ingham for his 4th of the season.

The Colts would keep the pressure coming. Just a minute and a half later while on the powerplay the boys would get the go ahead goal.

After attempting to make multiple cross crease passes Ryan Suzuki would find luck banking the puck off a Mississauga defender and through Ingham to give the Colts their first lead of the game. Justin Murray and Jason Willms would pick up assists on the play.

Barrie would survive a late 4 on 3 penalty kill with Lazarev holding the fort and take the 2-1 lead into the intermission.

Six minutes into the middle frame the Steelheads would respond. Albert Michnac would receive a pass from Keean Washkurak just above the left circle and quickly wrist one under the glove of Lazarev to even things up at 2.

Nearing the latter stages of the second period Lazarev would be forced to come up with a number of key saves after a series of chances by the Steelheads turning the momentum to the other end of the ice as Barrie would regain the cycle in the offensive zone.

Lipanov would find Fergus streaking into the Steelheads zone and feed Hawerchuck at the side of the net. Hawerchuck would patiently wait for Ingham to go down before backhanding one over his pad to the back of the net for his second of the game to give the Colts the lead skating into the final period.

The Colts would get off to a quick start in the third. After a shot by Joey Keane would miss wide of the goal, Tyler Tucker would step up as it wrapped around off the boards and blast it by Ingham to get the insurance marker, for his first tally of the year.

At 12:44 the Colts would add to their lead. Jason Willms would win the puck battle in the Steelheads corner and one hand a perfect pass to find Lucas Chiodo alone in the slot ripping one top corner over the glove of Ingham for his 10th goal of the season to make it 5-2.

Just moments later the Steelheads would answer back. After Lazarev would make the initial save in tight on Owen Tippett the rebound would kick straight out to Hague. He would make no mistake going bar down to get the fish back within two.

Mississauga would pull their goalie with 2 minutes remaining in the contest. The puck would come loose to the neutral zone for Jaden Peca to ice this one joining in on the scoring for his 3rd goal of the season.

Lazarev would make 21 saves in goal to register his 12th win of the season.

The Colts will look to keep the momentum going as they head east on the road for back to back matinee matchups. First up on Saturday the Colts will roll into Ottawa to face the 67’s before meeting up with Kingston Frontenacs Sunday afternoon.